Nakashima: 'It Has Been A Great Season For Me' 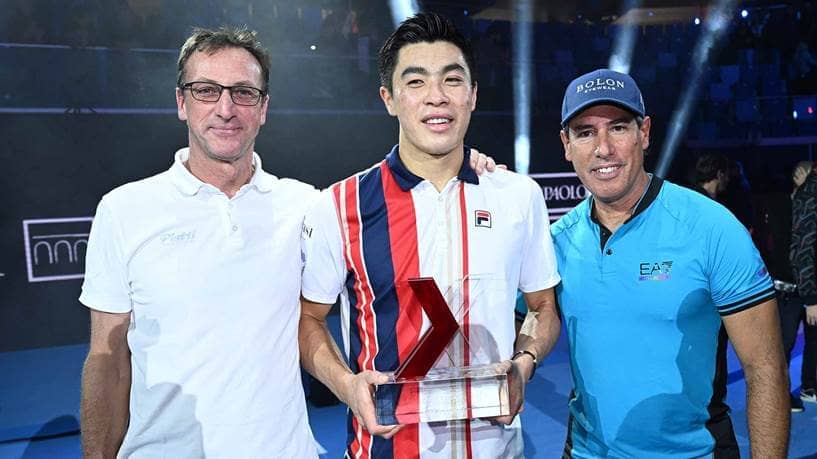 © Peter Staples/ATP Tour
Brandon Nakashima with his team on Saturday in Milan.

Brandon Nakashima made a list of goals at the start of the season. Eleven months on and the American revealed that he had achieved his targets as he reflected on his impressive season after winning the Intesa Sanpaolo Next Gen ATP Finals.

The 21-year-old American downed Jiri Lehecka in the Milan final on Saturday to round off a year that also saw him win his maiden tour-level title in San Diego and rise to a career-high No. 43 in the Pepperstone ATP Rankings.

“I think it has been a great season for me,” Nakashima said following his straight-sets win. “I've definitely learned a lot every match and every tournament. At the beginning of the year, I had some goals. [One was] to win my first ATP title and to be able to do that in San Diego was super special. Then to finish off the year here winning the title at Next Gen is super special.

“I think the whole year for me has been very consistent. I have such great memories both on and off the court and I'm super thankful for everyone that has been a part of it.”

Nakashima won all five of his matches at the 21-and-under event, which plays host to a range of rules and innovations. The fourth seed feels that the tournament provides the perfect opportunity for the Tour’s up and coming stars to make their mark.

“I think this tournament is great," Nakashima said. "Especially the ATP organising it and the Italian Tennis Federation. I think it's great that all the young and upcoming players come together in a nice fun format. I think it really exposes the younger generation as well with the media. I think this tournament is a great stepping stone. [To be] mixed will all the past champions is a great achievement. I'm just going to keep working hard and I am looking forward to next year.”

Nakashima is the fifth champion at the 21-and-under event, joining Hyeon Chung, Stefanos Tsitsipas, Jannik Sinner and Carlos Alcaraz. The American believes his victory is reward for the hard work he and his team have put in over the past 12 months.

“I think I have a great team with me here,” Nakashima said. “Eduardo [Infantino] has been great this past year. He's kind of brought us all together with Franco [Davin] and also with the fitness and physio. I'm super thankful for all of them. They work so hard for me and just to be able to share this moment with all of them, the last tournament of the year.”