Nakashima, Lehecka Contest Milan Rematch With Title On The Line 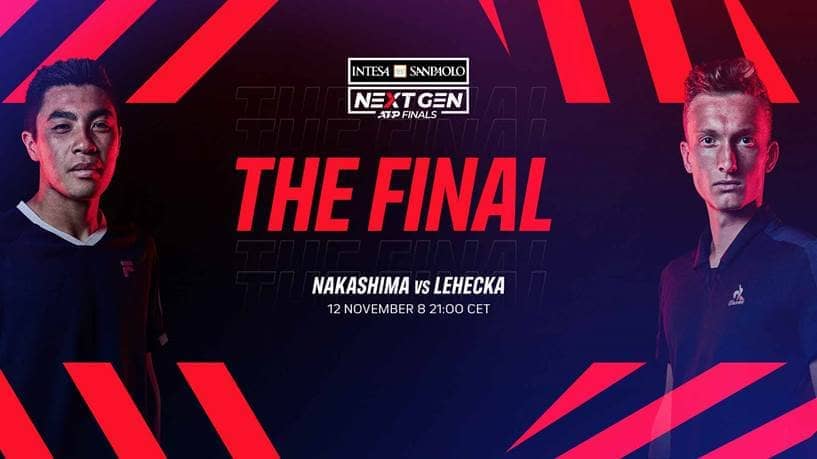 For the second time in four days, Brandon Nakashima and Jiri Lehecka will square off at the Intesa Sanpaolo Next Gen ATP Finals in Milan. In Saturday's title match, the fourth-seeded Nakashima will bid to complete a perfect week by becoming an undefeated champion, while fifth seed Lehecka seeks revenge after a round-robin defeat against the American on Wednesday.

In a 4-1, 4-3(2), 4-2 victory, Nakashima used an attacking game plan — particularly off his powerful forehand wing — to defeat the Czech.

“He plays a very solid game, very flat, a very progressive game, so I knew I had to minimise the errors on my side and try to be aggressive off the first ball as much as possible," Nakashima said after the mach. "I thought I did that pretty well today, so [I am] happy to get the win.”

Lehecka had his moments in the 68-minute match, firing 18 winners to Nakashima's 21, and he led 2-0 in the final set before the American used a finishing flourish to close the door.

The aggressive nature of both players was further demonstrated by the rally lengths in the contest. 80 of the match's 112 points lasted four shots or fewer, with Nakashima winning 45 of those short points to his opponent's 35. The first-strike mentality also holds true on return for Nakashima and Lehecka, with 16 break points created between the two in their round-robin match.

While Nakashima can take confidence from the win in the pair's first ATP Head2Head meeting, the American is not putting too much stock in the result.

Lehecka spoiled the previously unblemished Milan record of Dominic Stricker in the Friday's semi-finals. He will look to do the same to Nakashima in the title match to prevent the American from matching the 5-0 mark of past champions Carlos Alcaraz, Stefanos Tsitsipas and Hyeon Chung.

The Czech's 4-1, 4-3(4), 2-4, 4-1 win against Stricker was reward for a strong all-court performance in which he stepped inside the baseline at every opportunity.

“Today I think everything went the way I wanted,” Lehecka said post-match. “Me and my team spoke about this match yesterday and today and the plan was just to relax on the court and enjoy it as much as I can."

The Czech's breakthrough run to the Rotterdam semi-finals as a qualifier in February should help him stay relaxed in the high-pressure final, and he also lifted an ATP Challenger Tour trophy in Liberec this season as he rose from No. 141 to No. 74 in the Pepperstone ATP Rankings.

World No. 49 Nakashima has plenty of experience late in tournaments as well, having won his first ATP Tour title in his home city of San Diego in September — not to mention his semi-final run last year in Milan.

Adding to the pressure for both 21-year-olds: This will be their last chance to claim the Intesa Sanpaolo Next Gen ATP Finals trophy, as both will age out of the competition next year.