#NextGenATP Briton Draper: 'I Know I Have The Level' 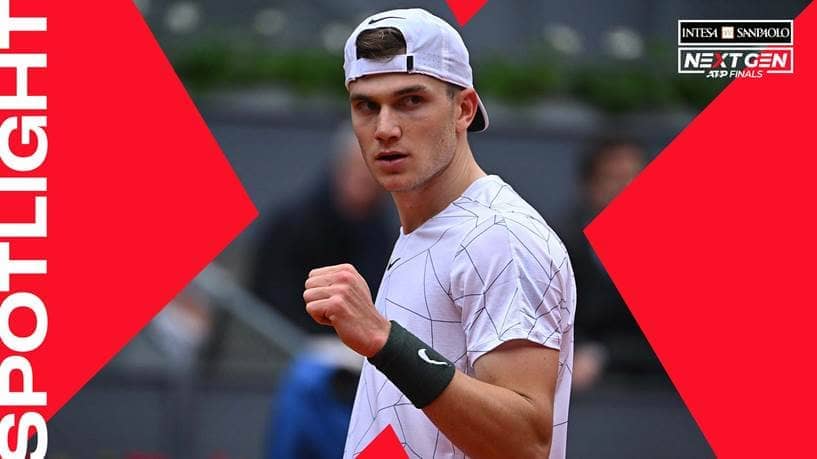 #NextGenATP Briton Jack Draper has taken the ATP Challenger Tour by storm this season, capturing a standout four titles which have seen him move inside the Top 100 in the Pepperstone ATP Rankings.

The 20-year-old soared into the spotlight last season when he won the first set against Novak Djokovic at Wimbledon, having earned victories over Jannik Sinner and Alexander Bublik at the Cinch Championships the week before.

Despite those highs, World No. 99 Draper has found greater consistency this year following injury-disrupted seasons in 2020 and 2021. Arriving this week at The Queen’s Club, he already has 26 wins to his name across all levels, including victories over Gilles Simon in Miami and Lorenzo Sonego in Madrid.

“I think the biggest thing has been that I have stayed injury-free,” Draper told ATPTour.com when discussing his strong year. “From 2019 I have barely been able to be on court and I have had quite a lot of bad injuries, so it is just about staying injury-free.

“It has been important to get my training right, training smart and looking after my body more. I know I have the tennis level and mindset to go far. I like to play aggressively and on the front foot, especially when I am in full flow. I have a big serve, big forehand and solid backhand. I have weapons really. It is just physically about where I am going to be.”

Draper, who missed the second half of 2021 due to a ruptured ligament in his ankle, believes he has the game to climb further in the coming months. However, he feels that it won’t be an easy task given the competition on the ATP Challenger Tour.

“The Challenger Tour is tough. Even though I have won a few [four] titles, I don’t know how I have done that,” Draper admitted. “I was thinking recently when I had a week off, ‘I have just won four events, I thought that was impossible’. So to do that I am very pleased.”

With Draper currently fifth in the Pepperstone ATP Race To Milan, he will be aiming to qualify for the 2022 Intesa Sanpaolo Next Gen ATP Finals, to be held from 8-12 November.

Spaniard Carlos Alcaraz triumphed at the 21-and-under event last year and the Briton revealed that the 19-year-old has been a major source of inspiration for him.

“Alcaraz is very special. I see him as a benchmark kind of player,” Draper said. “That is who I am judging myself against. His standards, his work rate and the way he plays. Watching someone like that you can learn a lot and I hope one day I will be competing for big titles against him.

“I know about the [Pepperstone ATP] Race [To Milan], but I haven’t paid too much attention to it, because even though I am high up now, there are players who are in the Top 50 and Top 100 who have access to ATP Tour events where points are higher,” he added when discussing Milan. “I am not getting my hopes up because there are a lot of extremely good young players coming through.”

Alongside competing on the Challenger circuit each week, Draper received wild cards into ATP Masters 1000 events in Miami and Madrid this season. He feels that his grass-court exploits of last summer, plus the opportunity to play Masters 1000 tournaments alongside countrymen Cameron Norrie, Daniel Evans and Andy Murray have played a major part in his continual development.

“It gave me good insight into a top-level tournament and a player like Novak. The match against him has definitely given me more confidence and a bit of inspiration this year,” Draper said when reflecting on his Wimbledon defeat to the World No. 1. “But ultimately, I know my tennis is good enough, it is just about getting everything else right. Being in Miami, Madrid and watching top players has given me a lot to learn from.

“Having the support from Dan, Andy and Cam and seeing what they are doing on Tour is very motivating for me. I feel with their support I can go a long way as well.”

Alongside Norrie, Evans and Murray, Draper is good friends with WTA star and fellow Brit Emma Raducanu. The 19-year-old shocked the world when she came through qualifying to win the US Open title last year and it was a moment that Draper revealed inspired him.

“It was a big motivation to see Emma win. Inspired me for sure,” he said. “I think watching her do something special, made me think as someone in a tough place who was injured, I saw her do well and thought I could do that. Not to the same extent maybe as the women’s game is a bit younger, so you can do that a bit younger, but definitely shows you can go from a tough place to an incredible place quickly.”

For now, Draper will focus on his first-round match at the Cinch Championships, where he will take on fourth seed Taylor Fritz in the first round after receiving a wild card from the ATP 500 grass-court event.