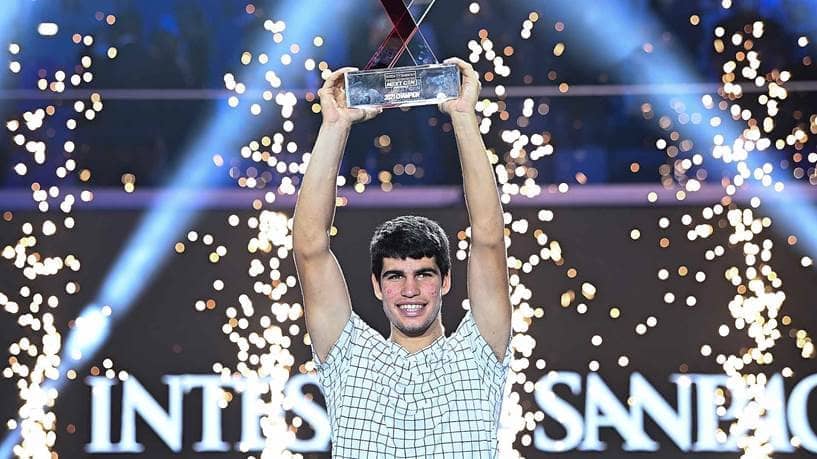 Carlos Alcaraz finished his breakthrough 2021 season in style Saturday at the Intesa Sanpaolo Next Gen ATP Finals, downing Sebastian Korda 4-3(5), 4-2, 4-2 to win the title in Milan.

The 18-year-old is the first Spaniard to triumph at the 21-and-under event and is the youngest player to earn 32 tour-level victories in a year since Andrei Medvedev, 18, went 32-11 in 1992.

In a high-quality match, Alcaraz hammered his groundstrokes with his usual deadly precision, stepping inside the baseline to target Korda’s backhand as he pinned the American back. He broke twice and fired 15 winners to secure victory after 84 minutes.

“It is amazing,” Alcaraz said in his on-court interview. “To be able to win this tournament means a lot to me. I am so excited right now and emotional. I was very, very nervous at the start. I had to be calm to save the break points. I know Korda is serving very well, so I had to play my best in those moments.”

The top seed was in ruthless form at the Allianz Cloud throughout the tournament, dropping just one set en route to the title as he dispatched Holger Rune, Brandon Nakashima and Juan Manuel Cerundolo in the round-robin stage, before cruising past Argentine Sebastian Baez in the last four.

“It went 0/30 on my serve [when serving for the match]," Alcaraz added. "So I had to be focused in that moment and I had to stay calm. It was really, really tough.”

After beginning the year at No. 141 in the FedEx ATP Rankings, Alcaraz has soared to a current career-high No. 32 under the guidance of coach Juan Carlos Ferrero. In a standout season, the 18-year-old clinched his maiden tour-level title in Umag and upset World No. 3 Stefanos Tsitsipas as he reached the quarter-finals at the US Open.

Alcaraz also advanced to tour-level semi-finals in Marbella, Winston-Salem and Vienna, where he defeated World No. 7 Matteo Berrettini. He showcased the experience he has gained this season against Korda, remaining focused in front of a lively crowd in Italy to become the fourth Intesa Sanpaolo Next Gen ATP Finals champion, joining Hyeon Chung, Tsitsipas and Jannik Sinner.

In a tight first set, Korda quickly found his rhythm, striking his flat groundstrokes with great depth. But the American was unable to convert any of the five break points he had as Alcaraz showed his fighting skills to force a tie-break. From 4/5 in the tie-break, Alcaraz won both points on Korda’s serve as he outmanoeuvred the 21-year-old, before sealing the set with a forehand volley winner.

Alcaraz continued to play aggressively in the second set as he closed the net effectively to further impose himself on Korda. The Spaniard did not face a break point in the second set, sealing it with one of the four aces he hit in the match. Fuelled by momentum, Alcaraz put his foot down in the third set, forcing Korda into mistakes with his depth to secure the title.

Korda, who also earned a perfect 3-0 round-robin record in Milan, captured his first tour-level title in Parma in May and reached the fourth round at Wimbledon in July. The World No. 39 defeated countryman Brandon Nakashima in five sets in the semi-final to become the first American to advance to the championship match at the 21-and-under event.