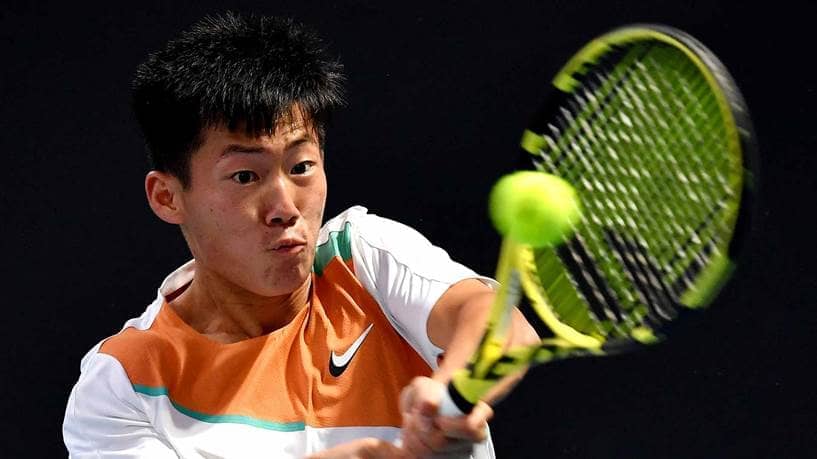 © Paul Crock/AFP via Getty Images
Chun-hsin Tseng began playing tennis around the age of five with his father, Ed.

Chun-hsin Tseng's rapid rise up the Pepperstone ATP Rankings continued this week with his latest major milestone. The #NextGenATP star from Chinese Taipei entered the Top 100 for the first time on 13 June on the heels of a stellar start to the 2022 season.

Both Tseng and fellow 20-year-old Jack Draper broke into the Top 100 on Monday, and the two sit at seventh and fifth, respectively, in the Pepperstone ATP Race To Milan.

While Great Britain's Draper has earned recent headlines with big wins over Lorenzo Sonego and Taylor Fritz, Tseng has competed in both the Australian Open and Roland Garros main draws this season in addition to his excellent record on the ATP Challenger Tour.

Tseng first entered the Top 200 last December after winning his first Challenger title in Maia, Portugal. He credits that triumph with sparking his game heading into the new year.

"After my first title in a Challenger in Maia, I believed that I could do something on the Tour and I started to know my game better and use my weapons better," he told ATPTour.com. "I found my rhythm and I knew that I could break through. This Challenger I will remember the most, because it helped my confidence when I was really down, and that was very important mentally."

Tseng has added to his trophy count this season, winning two more Challengers (in Bengaluru, India, and Murcia, Spain) in addition to reaching a third final. He then qualified for Roland Garros last month without dropping a set, but fell in five sets to Joao Sousa in the first round.

Tseng began playing tennis around the age of five, when his father, Ed — whom he calls his "biggest influence" — took him to play on clay courts in Chinese Taipei. His parents owned a food stand at the Lehua night market in Taipei, where they sold a dessert made of fruit and sugar. Tseng and his younger brother often helped out until he began travelling for tennis.

"In the beginning, it was tough, because we didn't know anybody to play with," he explained. "I learned to play in school. But the Federation helped me to meet coaches and visit academies and clubs and I began to travel more and more."

After he won the Les Petit As junior tournament at age 13, he began training at the Mouratoglou Academy, where he stayed for four years.

"If you want to play professionally, you have to go outside the country and many people can't afford to do it and also bring a coach," Tseng continued. "If I get better and better and keep going up the rankings, my father wants to start a tournament in Taiwan and help them. We want to give the Taiwanese players the chance to play at home, so they don't have to travel a lot."

Now coached by Benjamin Ebrahimzadeh, with whom he had worked at the Mouratoglou Academy, Tseng is competing this week in Parma as he seeks his third Challenger title of the season, and the fourth of his young career.