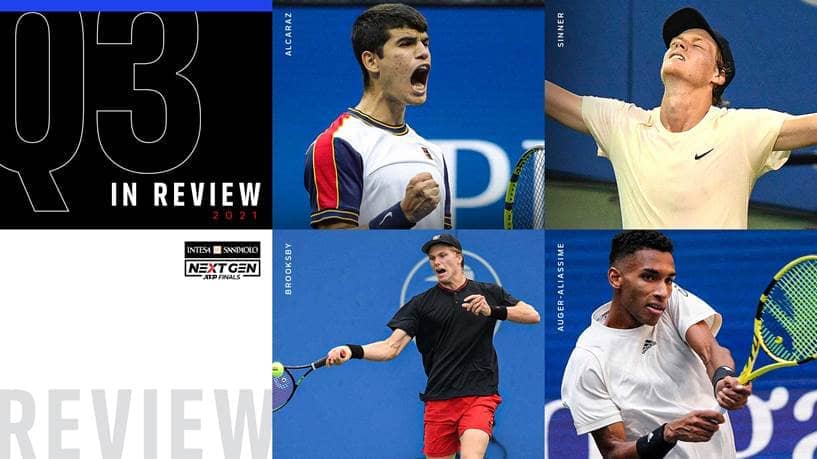 For six #NextGenATP stars, the third quarter of the 2021 ATP Tour season saw breakthrough runs, tour-level titles and career-best victories as the talented youngsters strengthened their positions in the ATP Race To Milan.

The 20-year-old Italian Jannik Sinner captured his second tour-level title of the season in Washington, while 21-year-old Felix Auger-Aliassime broke new ground by reaching his first major semi-final at the US Open.

Spaniard Carlos Alcaraz and American Jenson Brooksby put themselves in strong positions to compete at the Intesa Sanpaolo Next Gen ATP Finals in Milan, from 9-13 November, with eye-catching results at ATP Tour events and in New York.

With Holger Vitus Nodskov Rune and Brandon Nakashima also in contention to qualify, ATPTour.com takes a look at six men who have flourished during the third quarter of the 2021 season.

Sinner Soaring
The Italian arrived in Washington at the start of August having endured a slight dip in form, with four consecutive defeats making it his worse patch of the season. The question was whether the 20-year-old, who won the Great Ocean Road Open title at the start of the year, would let this rut turn into something more substantial? The answer was an emphatic no as he strengthened his top two position in the ATP Race To Milan.

Sinner blitzed through the field at the Citi Open, dropping just one set en route to his third ATP Tour title to become the youngest ATP 500 champion since the category was created in 2009. However, despite being delighted with his triumph, the World No. 14 is hungry for more.

"I think there is still much work to do, to be honest,” Sinner said after his victory in Washington. “A lot of experience to put in, working hard as we are doing now, and trying to play important matches and important moments of a match. I just want to improve.”

Improve he did as he advanced to the fourth round at the US Open for the first time, demonstrating his fighting qualities to see off Frenchman Gael Monfils in a five-set thriller, before being stopped by World No. 4 Alexander Zverev.

Red-Hot Felix
Auger-Aliassime rose to top spot in the ATP Race To Milan with strong performances at the Western & Southern Open and the US Open, where he reached his first major semi-final.

After arriving in North America following his run to the quarter-finals at Wimbledon, the Canadian played with confidence in Cincinnati as he surged into the last eight at an ATP Masters 1000 event for the second time. Following his quarter-final defeat to Stefanos Tsitsipas, attention turned to the US Open, where the 21-year-old mixed his powerful game with grit and determination as he rallied past Roberto Bautista Agut in a five-set thriller before overcoming American Frances Tiafoe under the lights in front of a raucous Arthur Ashe crowd.

“I'm happy with the level I've been playing at times, with the results I've had,” Auger-Aliassime said following his semi-final defeat to Daniil Medvedev at Flushing Meadows. “It's a positive week. As much as I would have wanted to win today, I didn't. can do better, and for sure I will. In the end, things are moving in the right direction."

By reaching the semi-finals, Auger-Aliassime became the first Canadian man to advance to the last four at the US Open in the tournament’s history (since 1881) and the youngest man since Juan Martin del Potro, 20, lifted the trophy in 2009.

Alcaraz’s Breakthrough Run
Alcaraz was outside the Top 200 in the FedEx ATP Rankings during the US Open last year. Fast forward 12 months, and the 18-year-old is No. 38 after he became the youngest US Open quarter-finalist in the Open Era (since 1968).

The Spaniard, who was making his debut in New York, recorded the biggest win of his career in the third round, when he upset World No. 3 Stefanos Tsitsipas as he showcased his aggressive game to the world on the Arthur Ashe Stadium. Prior to his arrival at Flushing Meadows, Alcaraz cruised to his first tour-level title in Umag to become the youngest champion at this level since Kei Nishikori emerged victorious in Delray Beach in 2008.

”It’s amazing. I have a lot of emotions. I’m really, really happy with this victory, this win, my first ATP [title],” Alcaraz said in Umag. “I’m going to enjoy this moment a lot.”

The teenager, who then advanced to the last four in Winston-Salem, will make his debut at the Intesa Sanpaolo Next Gen ATP Finals in Milan, from 9-13 November, after he qualified following his standout performances.

Brooksby On Fire
American Brooksby has had a summer to remember as he soared up to fifth place in the ATP Race To Milan following strong runs in Newport, Washington and at the US Open.

Competing in his third tour-level main draw event and his first on grass, the 20-year-old turned heads in Newport as he became the second-youngest finalist in the event’s 45-year-history, since 19-year-old Greg Rusedski in 1993. Brooksby then enjoyed a run to the last four in Washington.

While this was impressive, the best was yet to come. At Flushing Meadows, Brooksby, who was making his third appearance at Flushing Meadows, caught the fan's attention as he raced into the fourth round, where he met World No. 1 Novak Djokovic. After committing just one unforced error to take the opening set 6-1 against the Serbian, Brooksby eventually succumbed to Djokovic’s relentless pressure in a high-quality match to bow out.

“It's definitely all positive things to take away,” Brooksby said after his defeat to Djokovic. “I learned my game. I'm feeling really confident in my game. I believe I can compete with anybody. I knew it would be important to start strong, to impose my mindset and my strategy, my game out there. It's definitely special.”

Rune & Nakashima On The Charge
After winning back-to-back ATP Challenger Tour titles in San Marino and Verona, Rune strengthened his bid to compete at the Next Gen ATP Finals in Milan.

The 18-year-old, who has enjoyed an impressive season, rising from outside the Top 450 in January to a current career-high No. 136, then headed to the US Open where he came through three qualifying rounds to make his main draw debut at a major.

The Dane had the small matter of facing 20-time major champion Djokovic under the lights on the Arthur Ashe Stadium. Instead of shrinking under the pressure, Rune raised his level, inserting his aggressive baseline game on the top seed to capture the second set in a tie-break, before falling in four sets.

"I never felt anything like this. It was [an] unbelievable feeling staying there,” Rune said. “I tried to give the crowd something, fight for every point, be pumped and everything."

Alongside Rune, American Brandon Nakashima laid down his claim for a spot in Milan with back-to-back ATP Tour finals in Los Cabos and Atlanta, before advancing to the third round in Washington.

Nakashima: 'I Want To Show That I Belong With The Top Guys'

Before the Mifel Open began in July, Nakashima had not won a tour-level match since last year's US Open. From the start of his run in Los Cabos to his Washington exit, the American went 10-3, a stretch that propelled him into the Top 100 of the FedEx ATP Rankings for the first time at No. 83.