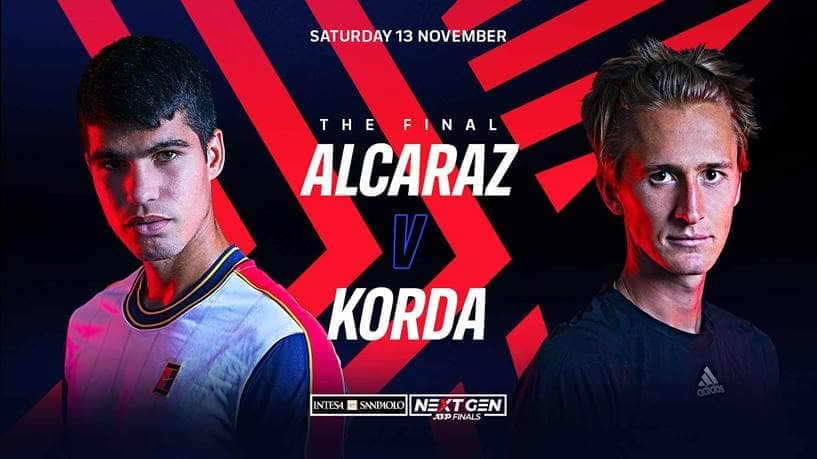 Two of the hottest young stars on the ATP Tour will look to cap breakout seasons in the perfect manner when they clash in Saturday’s title match of the Intesa Sanpaolo Next Gen ATP Finals. Heading into their first ATP Head2Head meeting, other than age, little separates top seed Carlos Alcaraz and second seed Sebastian Korda, who both take unbeaten 4-0 records into the decider.

“The final is going to be really, really tough,” Alcaraz said after defeating Argentine Sebastian Baez in Fridays’ semi-finals. “Sebastian is playing great tennis and I am really excited to play against him for the first time. It would be amazing to win the title, but I am going to be facing a really good opponent, so we will see.”

Spain’s Alcaraz is looking to become the second consecutive 18-year-old (Jannik Sinner) to capture the 21-and-under event. Like his rival, 21-year-old Korda is chasing his second title of the season. Alcaraz had just one tour-level win coming into 2021; Korda had just three. Today, both players are chasing the 32nd win of their respective breakout seasons.

Win number 32 would match Alcaraz’s current career-high FedEx ATP Ranking of No. 32, which has him as the highest-ranked player by age since former World No. 1 Lleyton Hewitt was No. 31 more than two decades ago in August 1999.

In earning his 30th win of the season in group play against Juan Manuel Cerundolo, Alcaraz became the youngest player to notch 30 wins in a season since an 18-year-old Rafael Nadal went 30-17 in 2004. If he wins the title, Alcaraz will match Andrei Medvedev, 18, with 32 wins in 1992.

But Alcaraz is sure to not be thinking about milestones. His focus will be singular: beating World No. 39 Korda, who is pumped up for the challenge.

Speaking before Alcaraz had taken the court for the late semi-final, former junior World No. 1 Korda said that he hoped to get the chance to end his season with a showdown against the man with whom he could be about to forge a decade-long rivalry.

“I hope it's Carlos. I've never practised with him, I've never played him in a match; it will be really exciting,” Korda said. “Hopefully we can have a lot of battles in the next coming years; he's playing some incredible tennis, really aggressive player and really strong mentally, so, yeah, it will be a new challenge and I'm really looking forward to it if it happens.”

Note: The Intesa Sanpaolo Next Gen ATP Finals does not count as an official tour-level title in a player’s record.