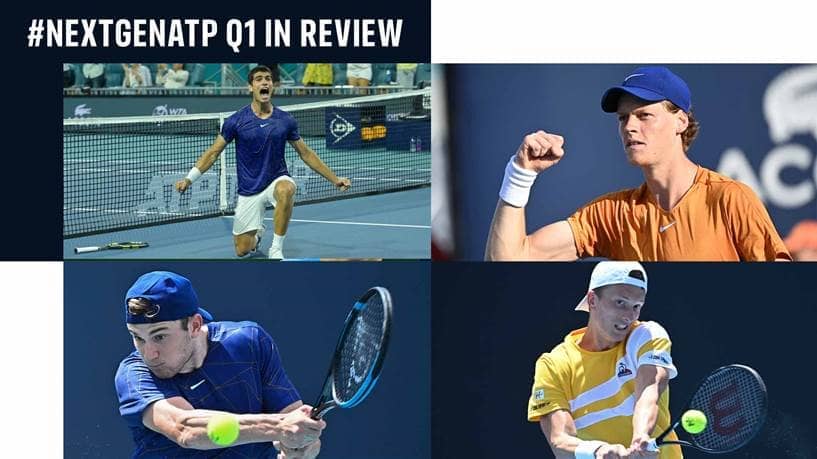 For Five #NextGenATP stars, the first quarter of the 2022 ATP Tour season marked career-best wins, breakthrough runs and titles at both Tour and Challenger level.

No. 1 Carlos Alcaraz, 1950 points
The Spaniard has started the 2022 season in the same way he finished 2021, by winning titles and earning standout Top 10 wins. Alcaraz capped off a breakthrough 2021 campaign by lifting the Intesa Sanpaolo Next Gen ATP Finals trophy in Milan and wasted little time in making his mark at the Australian Open in his first tournament of the year.

After cruising past Alejandro Tabilo and Dusan Lajovic, the 18-year-old pushed World No. 6 Matteo Berrettini to a fifth-set tie-break in one of the matches of the season. If his run in Melbourne didn’t remind everyone what he was capable of, then his performance in Rio de Janeiro certainly did.

Alcaraz eliminated seeded pair Berrettini and Diego Schwartzman as he became the youngest ATP 500 champion since the category was invented in 2009 at an event he had gained his maiden tour-level win at just two years earlier.

Following his victory on the clay in Brazil, Alcaraz arrived at the first ATP Masters 1000 event in Indian Wells full of confidence. Alcaraz dispatched Top 20 stars Gael Monfils, Roberto Bautista Agut and Cameron Norrie in the California desert as he became the second-youngest semi-finalist in tournament history behind only Andre Agassi, 17, in 1988. Things only got better from there.

"It feels amazing. I'm so happy to get the title here in Miami with everyone who was supporting me," Alcaraz said. "The hard work paid off and it's amazing to get my first Masters 1000."

No. 2 Jannik Sinner, 800 points
Jannik Sinner flew out of the blocks at the beginning of the year as he quickly found his range in Australia. The 20-year-old earned three wins at the ATP Cup, before he reached the quarter-finals at the Australian Open for the first time.

Despite falling to Stefanos Tsitsipas in Melbourne, Sinner identified the positives from his Aussie Open run and revealed it provided him with further motivation moving forward.

“My goal is to play many matches like this, important matches against the best guys in the world, and then we see and then I grow," Sinner said after his defeat. "I think it was good. I played matches, and I had [a good] experience. Let's see next year what I do here.”

The Italian, who triumphed at the Intesa Sanpaolo Next Gen ATP Finals in 2019, went on to beat former World No. 1 Andy Murray in Dubai as he reached the last eight, before advancing to the fourth round in Indian Wells.

Sinner then earned wins against Emil Ruusuvuori, Pablo Carreno Busta and Nick Kyrgios en route to the quarter-finals in Miami as he rounded off a strong first quarter of the season at the second Masters 1000 of the year.

No. 3 Jack Draper, 361 points
Brit Jack Draper grabbed the spotlight at Wimbledon last season when he took a set off Novak Djokovic on Centre Court in their first-round clash. Fast forward eight months and Draper has enjoyed a standout start to the season, climbing from No. 265 in the ATP Rankings to a career-high No. 124 on 4 April.

The lefty has earned four ATP Challenger Tour titles this year, becoming the first player to capture four Challenger trophies in the first quarter of a season.

Draper’s early-season form has fuelled him with confidence and he revealed he owed some of his success to countrymen Andy Murray, Cameron Norrie and Daniel Evans.

"I definitely believe that in terms of my level of tennis, that I can beat pretty much anyone," Draper said. "I'm lucky to practise at the National Tennis Centre with Murray, Norrie and Evans when they're there. I know that when I go to Challengers, there are going to be some great players I'm facing, so I'm lucky to have good practices like that at the NTC to prepare me. They are all very supportive of us younger players. It helps that there's a good buzz in British tennis at the moment.”

The 20-year-old was rewarded for his impressive ATP Challenger Tour results by receiving a wild card into the Miami Open presented by Itau, where he earned his third tour-level win against former World No. 6 Gilles Simon.

No. 4 Jiri Lehecka, 267 points
Czech Republic’s Jiri Lehecka finds himself fourth in the ATP Race To Milan at the start of April, having performed impressively on both the ATP Tour and ATP Challenger Tour.

The 20-year-old, who will be aiming to make his debut in Milan in November, enjoyed a dream run to the semi-finals in Rotterdam as he soared into the Top 100 of the ATP Rankings.

After coming through qualifying at the ATP 500, Lehecka upset then-World No. 12 Denis Shapovalov before eliminating Dutchman Botic van de Zandschulp and #NextGenATP Italian Lorenzo Musetti. It took a gritty performance from Greek Tsitsipas to stop Lehecka’s run in three sets.

“Of course I’m excited,” Lehecka said after his victory over Shapovalov. “It was a good match from my side. I knew that it would be a tough match of course, he’s No. 12 in the world. It is not easy against these type of players.”

The Czech, who has reached two ATP Challenger Tour quarter-finals this year, has sporting pedigree in his family. His father was a swimmer and his mother was a track and field athlete. Lehecka believes his parents' background has been beneficial in his development.

No. 5 Lorenzo Musetti, 191 points
After making his debut in Milan in front of his home supporters in November, #NextGenATP Italian Musetti will be aiming to return to the Allianz Cloud this year.

The 20-year-old has enjoyed steady progress in 2022, reaching tour-level quarter-finals in Pune and Rotterdam as he has continued to cause opponents problems with his shot making, variety and agility. Musetti, who also advanced to the second round at the BNP Paribas Open, earned the biggest win of his season at the ATP 500 in Rotterdam, where he downed then-World No. 11 Hubert Hurkacz.

“I played in Australia with a little bit of stress, and I had two tough matches with two great opponents,” Musetti said after the Hurkacz win. “From losses you take a lot of experience, especially as younger players, so for me it’s really helpful and I decided to play indoors on a hard court because it is maybe my worst surface. I didn’t think about being here [in the quarter-finals] but I’m really enjoying it.”

With the clay-court season ahead, Musetti will be confident he can strengthen his Milan bid on a surface he favours most. The Italian reached the semi-finals in Lyon last year, before he advanced to the fourth round at Roland Garros, where he took two sets off Djokovic.

Others To Watch
Dominic Stricker, Chun-hsin Tseng and Brandon Nakashima sit sixth, seventh and eighth in the ATP Race To Milan, respectively, after early 2022 success. Switzerland’s Stricker and Tseng of Chinese Taipei have both won ATP Challenger Tour trophies, while 2021 Milan competitor Nakashima advanced to the quarter-finals at the Sydney Tennis Classic in January.

Dane Holger Rune competed in Milan last year and is currently 15th in the Race (83 points), while 17-year-old Shang Juncheng (27th, 44 points) of China became the first man from his country to qualify for Indian Wells.