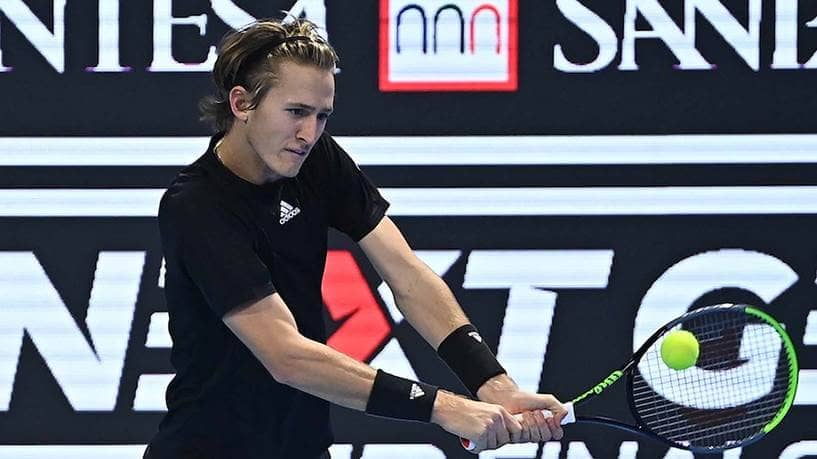 American faces Alcaraz or Baez in the championship match

In a battle between two of America’s brightest prospects, Sebastian Korda came out on top Friday at the Intesa Sanpaolo Next Gen ATP Finals, overcoming Brandon Nakashima 4-3(3), 2-4, 1-4, 4-2, 4-2 to reach the final in Milan.

The 21-year-old finished the round-robin stage with a perfect 3-0 record and played with such confidence against Nakashima, thundering serves and crushing forehands to advance after one hour and 54 minutes.

“Brandon was playing some unbelievable tennis but I stayed with him and had some chances in the fourth and five sets and took them and ran,” Korda said in his on-court interview. “I got more aggressive. I tried coming into the net more and placing my serves more, and that opened up the court for me.”

The pressure has been on Korda this week as the second seed at the 21-and-under event. However, under high expectations, he has coped well, adjusting to the first-to-four, best-of-five set format to secure his place in the final, where he will either face World No. 32 Carlos Alcaraz or Argentine Sebastian Baez.

In their first ATPHead2Head meeting, Korda quickly found his rhythm from the baseline and on serve in front of a lively crowd at the Allianz Cloud, hitting five aces in the first set. But Nakashima grew into the match as it went on as he targeted Korda's backhand to pin the American behind the baseline. The World No. 63 won all nine of his first-serve points in the second set and committed just one unforced error in the third set.

However, Korda stormed ahead in the fourth set, winning 10 points in row as he struck with great depth to break and force a decider. He then demonstrated his grit in the fifth set as he played aggressively and bravely, closing the net effectively to secure victory.

In a standout season, Korda defeated then-World No. 9 Diego Schwartzman en route to the quarter-finals in Miami, before he captured his first tour-level title in Parma. The World No. 39 also reached the fourth round at Wimbledon.

With his victory against Nakashima, Korda has now earned 31 tour-level wins this season. He had just three at this level prior to 2021.

Nakashima earned a vital victory against Holger Rune as he went 2-1 in the round-robin stage to qualify for the semi-finals. Earlier this season, the 20-year-old became the youngest American since Andy Roddick in 2001-02 to reach back-to-back tour-level finals when he advanced to championship matches in Los Cabos and Atlanta.

Did You Know?
With 13 Americans inside the Top 100, Korda and Nakashima, aged 21 and 20 respectively are two of the youngest, alongside 21-year-old Jenson Brooksby.