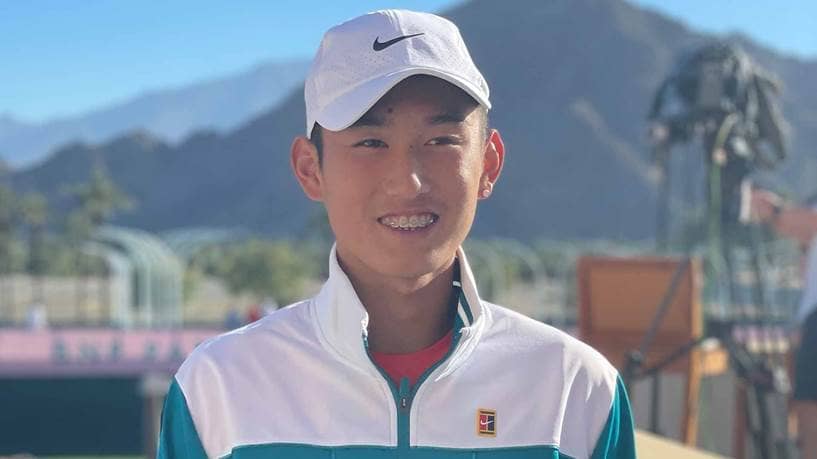 © Andrew Eichenholz/ATP Tour
Shang Juncheng will compete in his first ATP Masters 1000 main draw at the BNP Paribas Open, where he qualified.

Chinese teen has made history at Indian Wells

The achievements are beginning to add up for Shang Juncheng, the 17-year-old who qualified for the BNP Paribas Open on Thursday. The teen will be the first Chinese man to play in the main draw at Indian Wells and the first player from his country to qualify for an ATP Masters 1000 event among other accomplishments.

Any time you do something that puts you in the same sentence as Rafael Nadal — Shang is the youngest Masters 1000 qualifier since a 16-year-old Nadal in Hamburg in 2003 — things are probably going well.

“It’s always special to see what I’ve accomplished,” Shang, who advanced past Francisco Cerundolo and Mats Moraing in qualifying, told ATPTour.com. “But for me, it’s more important to move forward.”

Shang, a lefty who will play fellow qualifier Jaume Munar on Friday, will move forward with plenty of eager followers, especially in China. CCTV-5 News, which broadcasts to more than one billion consumers across the country, shared an interview about his Indian Wells qualification on Thursday.

According to Zhang Bendou, who won the 2013 Ron Bookman Media Excellence Award in the ATP Awards, fans in China are eager for a man from their country to crack the Top 100 of the ATP Rankings for the first time.

“Right now every move of Juncheng is big news and being closely watched among tennis fans here,” Zhang said. “Men’s tennis in China has been a myth for many years. China can send rockets to space, among many other great things, but we just haven’t been able to produce even one ATP Top 100 player all along. We have been waiting too long. Now, we hope the wait will soon be over.”

Shang’s tennis journey began just more than a decade ago. His father, Shang Yi, and mother, Wu Na, were both professional athletes. Shang played football and Wu was a world-championship winning table tennis player. They both enjoy tennis and introduced their son to the sport when he was six.

“I remember it was in an indoor facility and you could hear a lot of players hitting and the ball sound was really loud. I thought it was really cool you could hit with another player. It’s just more intense with the competition,” Shang said. “My parents really loved tennis. They both were athletes, so sports to them were just daily things. They got me into tennis and I really loved it, especially the competition.”

Like most kids who grew up in recent years, Shang’s favourite players were the ‘Big Three’ — Roger Federer, Rafael Nadal and Novak Djokovic. But early on, he was most interested in getting on court himself.

“Playing was the most fun,” Shang said. “I always thought when I was playing on court, it was cool, more than just watching the guys play. But as I got more into tennis when I was older and watching the big names play was very fun for me. I think when I was eight, I started loving it.

“For every player when they are little, when they pick up a racquet, they dream of being on the biggest stages in tennis. I was one of those kids and playing just makes me very happy.”

Shang trained at the Academia Sanchez-Casal Nanjing in China, a branch of the academy run by Spanish legend Emilio Sanchez. Shang’s father played football in Spain, so in that sense there was familiarity.

“He really trusted the process of how Spanish players were made and we were actually going to Spain,” Shang recalled. “But we heard that Emilio Sanchez moved to the United States, so that’s why we got into the academy there in Naples.”

At age 12, ‘Jerry’ and his father moved to Florida, where he immediately made an impression on Sanchez, who reached World No. 7 in singles and No. 1 in doubles.

“He was always a super nice kid. He always had his way of doing things, it seemed he always had one more gear,” Sanchez said. “He played at a pace, then he played another match at another pace, he always had an extra gear to play with.”

Shang began training at the IMG Academy, also in Florida, when he was nearly 15. At 16, he became the No. 1 junior in the world. The Chinese teen has proven comfortable against the pros, winning four ITF World Tennis Tour events. Sanchez believes he has a complete game. But if there is one thing he can improve, it is gaining more of an advantage from his serve.

“Everybody will see him and say, ‘This kid is effortless’. It will be very difficult to break him down. Normally kids, they don’t have the physical power, but he has the physicality to be very low,” Sanchez said. “It doesn’t matter how good the player is on the other side. He will not bend, he will always stay straight. He has a super strong core. He does things smoothly and he will absorb any type of power from the opponents in a very, very nice way.” 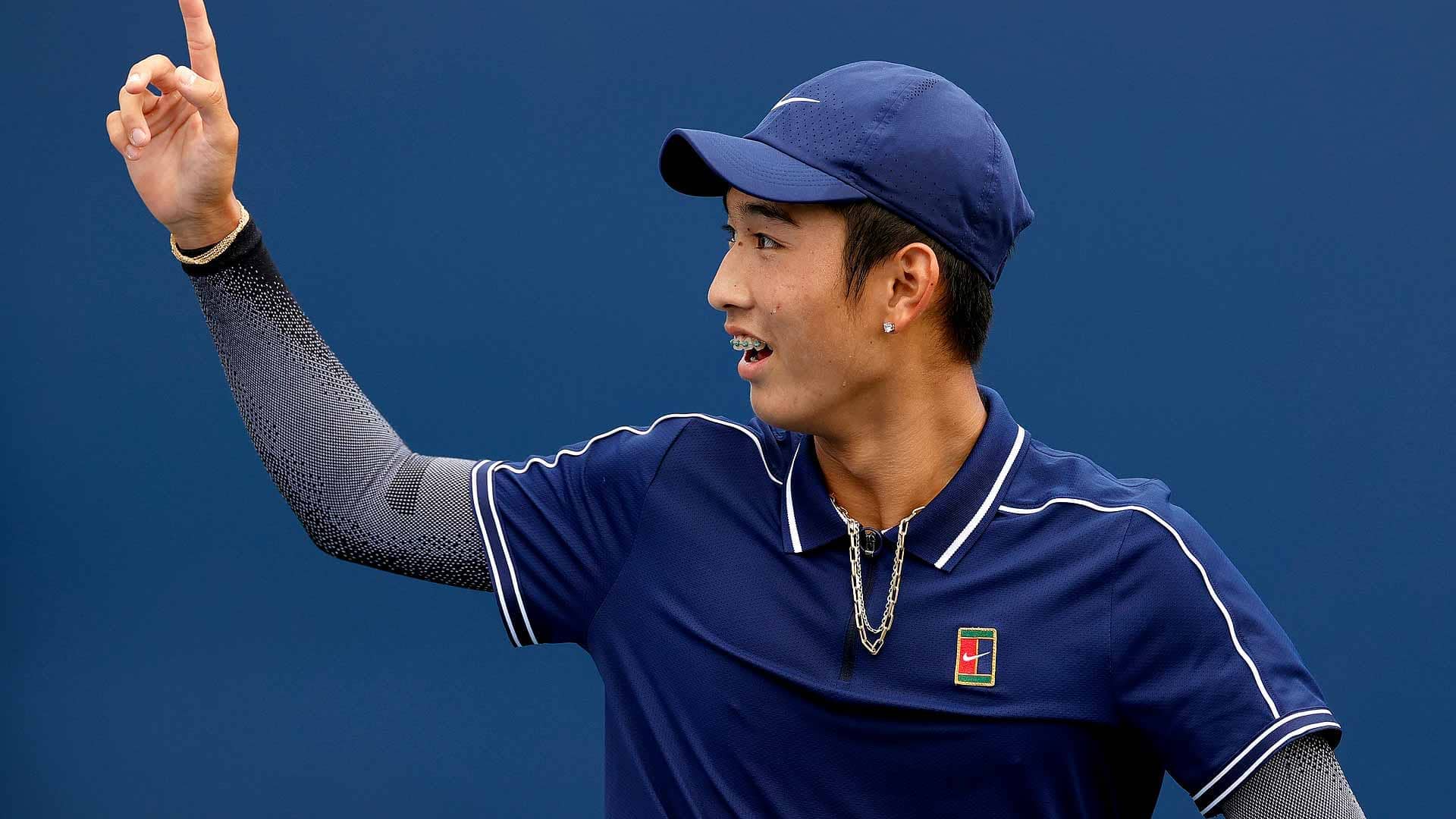 Shang Juncheng reached the 2021 US Open boys' singles final. Photo Credit: Sarah Stier/Getty Images
Shang could become a trailblazer for men’s tennis in China the way Li Na, a two-time major winner, was for the sport as a whole.

“She was one of my idols growing up and watching her win the Slams is the most special thing ever,” Shang said. “Especially seeing Chinese players can do it gave me a lot of hope.”

Zhang Bendou added that anticipation for Shang's future is growing. "Juncheng Shang has created history and is a big hit among his Chinese fans and on social media. Since our gold medal in the Athens Olympics in 2004, Chinese tennis fans are really spoiled by their players, but just on the women’s side, led by Li Na and her colleagues,” Zhang said. “You should always have balance between yin and yang, right? They are really looking forward to have a tour-level men’s player, now they might get one.”

Sanchez believes that there is no doubt Shang will ascend into the Top 100 and make national history. The Spaniard is not concerned with the pressure on the teen.

“He doesn’t have pressure from China. He’ll have the pressure globally whenever he arrives, but not because he’s going to be the best Chinese player,” Sanchez said. “He wants to really be on top and he has that capacity to be on top.”

This is a massive moment for the highly touted youngster. But you would not have known it Thursday. Shang did both American and Chinese media before taking a seat inside Stadium 1 to watch a WTA match between Caroline Garcia and Dayana Yastremska.

Shang is like many out there, a kid who loves tennis. Off the court, he likes playing golf and reading books. The Harry Potter series is “by far” his favourite — Harry is his favourite character — and he has recently been reading Sandworms of Dune. But for now, he is focussed on the opportunity at hand against Munar.

“I’m just really happy to even play in this tournament and qualifying was one of the biggest goals for me this year,” Shang said. “I’m excited. Hopefully, I can give him a fight.”