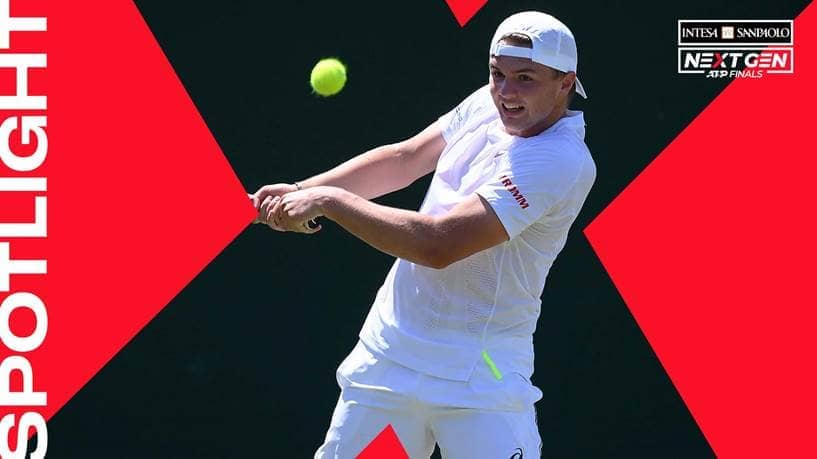 © Justin Setterfield/Getty Images
Dominic Stricker will look to channel home support this week when he competes as a wild card in Gstaad.

When it came to choosing his tennis idol as a kid, there wasn’t much deliberating to be done for Dominic Stricker.

“Of course, if you live in Switzerland…My one big idol [had to be] Roger Federer,” the #NextGenATP Swiss recently told ATPTour.com. “Roger is Swiss and has a pretty similar game to how I would like to play.”

Now one of the hottest prospects on the ATP Tour and sitting at No. 187 in the Pepperstone ATP Rankings, the 19-year-old Stricker no longer has to simply regard Federer as someone to be admired from afar. Stricker’s coach, Sven Swinnen, spent two years as the 103-time tour-titlist's classmate and daily practice partner at the Swiss national federation when the pair were in their teens. His illustrious ex-classmate has been more than happy to offer advice to Swinnen’s young charge.

“It is lucky,” said Swinnen. “Roger invited Dominic to Dubai twice already to do some practice, some pre-season stuff, so that was really helpful. Roger knows us now pretty well and we got some really good tips from him.”

Their shared nationality may have made it hard for him not to idolise Federer as a youngster but, as a clean-hitting left-hander, Stricker’s development has also been influenced by some top-class ATP Tour lefties. “[I love] Rafa [Nadal] as well, and some players that haven’t played since I started,” said Stricker. “There was [Michael] Llodra and [Marcelo] Rios. I watched them a lot.”

Stricker is not so sure how much those role models have influenced his own playing style, however.

“I would say [my game] is actually not a typical lefty game,” he said. “Lefties tend to maybe be more grinders, but I like to go into the court, also approach the net sometimes, mix it up with some serve and volley. I would say I’m an aggressive player with a good serve and a good forehand, and I try to take the game in my own hands.”

That front-foot approach made a strong first impression when it appeared on the ATP Tour in May and June last year. The then-18-year-old Stricker took out former World No. 3 Marin Cilic on his tour-level debut en route to the quarter-finals as a wild card in Geneva. He backed that up on the grass in Stuttgart three weeks later, defeating Hubert Hurkacz to earn his maiden Top 20 win and make it back-to-back ATP Tour quarter-finals.

In 2022, Stricker sits 11th in the Pepperstone ATP Race To Milan as he attempts to qualify for November’s Intesa Sanpaolo Next Gen ATP Finals for the first time. The 19-year-old started the year in impressive fashion, reaching the final at the ATP Challenger Tour event in Columbus in January, before going one better a week later to lift his second Challenger title in Cleveland.

Those successes lifted the Swiss into the Top 200 in the Pepperstone ATP Rankings for the first time, with Stricker reaching his career-high of No. 155 in March. Despite struggling to immediately back those results up, Stricker earned some impressive wins on the grass, most notably a straight-sets win against serve-and-volley specialist Maxime Cressy in Stuttgart in June.

“I think it has been pretty good,” said Stricker. “Everything started with the first Slam in Australia this year. I was pretty happy [just] to be there. A pretty successful two weeks in America, with one final and winning one. Some weeks I was injured and had some other problems but now I’m back.”

Swinnen agrees and believes Stricker’s positive mentality and willingness to put in the hard yards away from tournaments stands him in good stead. “I think we had a good off season, in December he was practising hard,” said Swinnen. “In Australia he had a tough second round in the qualies, but he was still confident in his game. It didn’t really affect him too much that he lost there.

“It was a good decision to go straight to the U.S. That was a long road trip, but at the end it paid off. After the U.S., he was struggling a little bit, some small issues, but I’m glad he's picked it up again.”

Get To Know Dominic
Describe Yourself Off Court: That’s a tough question! I would say a funny guy, always up for a joke. Pretty relaxed and calm, likes to play games with my coach or other players.

Biggest Passion Outside Tennis: I would say it is golf. I really like to spend some time on the golf course. When I’m back home and I have a day off I’m always trying to find someone to come and play with me.

I played once on Tour, when I played the juniors in Australia, with my former coach. I lost.

Perfect Day Without Tennis: I think it would be sleeping pretty long, maybe until like 9 a.m. Then get up, have some good breakfast and do something with my family. Go for a little walk or play some card games, and then eat some lunch. Then I would go for a round of golf with my friends, and then get back home for a barbeque.

Favourite Music: Maybe just some Swiss songs, when I’m in the mood, or some rap. The music comes with your mood, I would say.

Favourite Food From Home: Actually a good story. I don’t like cheese. It’s tough to say as a Swiss guy. I wouldn’t say anything specific. I really like a lot of food when it’s well cooked. All food is good, and I’m not allergic to anything so that’s good.