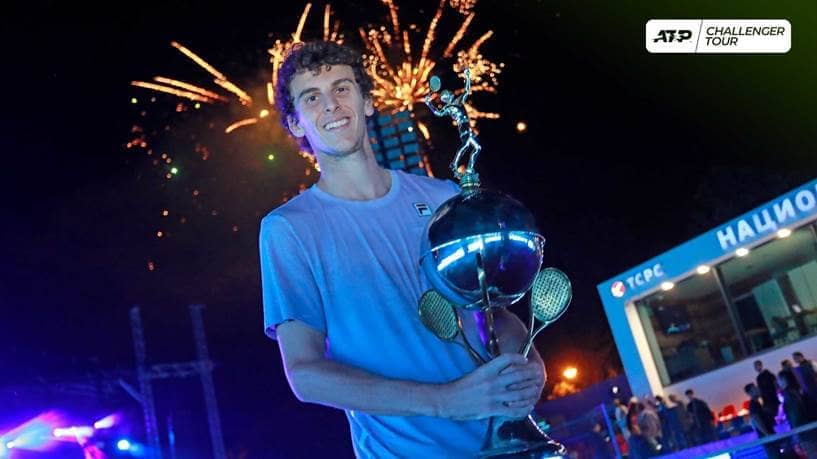 Juan Manuel Cerundolo knew it would be a tough decision, but the 19-year-old understood that it was for the best. The surging #NextGenATP star had the opportunity to make his US Open qualifying debut last month, but opted to forego the hard-court major as he remained in Europe and continued building his game on the ATP Challenger Tour.

Safe to say, the decision paid dividends. Cerundolo went back-to-back on the clay of Como, Italy and Banja Luka, Bosnia & Herzegovina, claiming his second and third Challenger titles of the year. The Argentine sealed the remarkable run with a 6-3, 6-1 victory over Nikola Milojevic in Sunday's Srpska Open championship. He reeled off eight sets won in a row to capture the crown in Banja Luka.

The teenager is making noise on the court with his determined play and dogged defence, and he will earn a significant reward in the FedEx ATP Rankings for his efforts. Cerundolo is poised to rise 27 spots to a career-high No. 108 on Monday. He and brother Francisco Cerundolo (No. 104) are both knocking on the door of the Top 100.

Moreover, his title treble has him in elite company in Argentine tennis history. At the age of 19 years and nine months, Cerundolo became the third-youngest player from his country to win three Challenger titles. Only Juan Martin del Potro and Guillermo Coria were younger when they lifted their third trophies.

Cerundolo, who also secured his maiden ATP Tour title in Cordoba in February, is up to seventh position in the ATP Race To Milan. The teen will look to secure his place at the Intesa Sanpaolo Next Gen ATP Finals in the coming months.