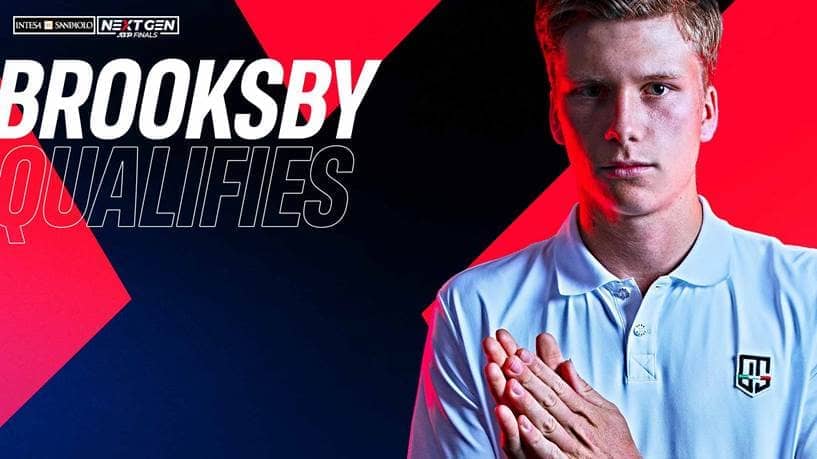 Jenson Brooksby became the fifth singles player to qualify for the Intesa Sanpaolo Next Gen ATP Finals in Milan, to be played 9-13 November, after advancing to the semi-finals of the European Open on Friday.

The 20-year-old had earned just one tour-level win before the 2021 season. But the American has enjoyed a breakthrough year, climbing from outside the Top 300 in the FedEx ATP Rankings to a current career-high of No. 70.

"I have known about hopefully finishing with the Next Gen ATP Finals for a while now," Brooksby said. "With how I have been playing and getting better, I thought it would take care of itself. It is definitely exciting to confirm my spot there. It will be a great tournament to finish the year, but I am shooting for more.

"It has been a good year. After not getting to play last year, I think I have made a lot of big strides this year. I am proud of the progress I have made mentally, physically and all around."

Our fifth qualifier for the @intesasanpaolo #NextGenATP Finals in Milan 🇮🇹 pic.twitter.com/MhLzkV0Z34

Brooksby has checked off plenty of firsts this year, including a run to his first ATP Tour final at the Hall of Fame Open. He also made his maiden trip to the fourth round at a major at the US Open, where he defeated Taylor Fritz and Aslan Karatsev before losing against World No. 1 Novak Djokovic in a tight four-setter.

The Californian also reached the semi-finals at the Citi Open, where he overcame fellow #NextGenATP star Felix Auger-Aliassime en route to the last four. Earlier in the season, the 20-year-old triumphed at three ATP Challenger Tour events.

Brooksby, who will be making his debut at the 21-and-under-tournament, joins fellow qualifiers Jannik Sinner, Auger-Aliassime, Carlos Alcaraz and Sebastian Korda.

Did You Know?
Brooksby is named after former Formula 1 driver Jenson Button. His father, Glen, is an avid fan of the sport.