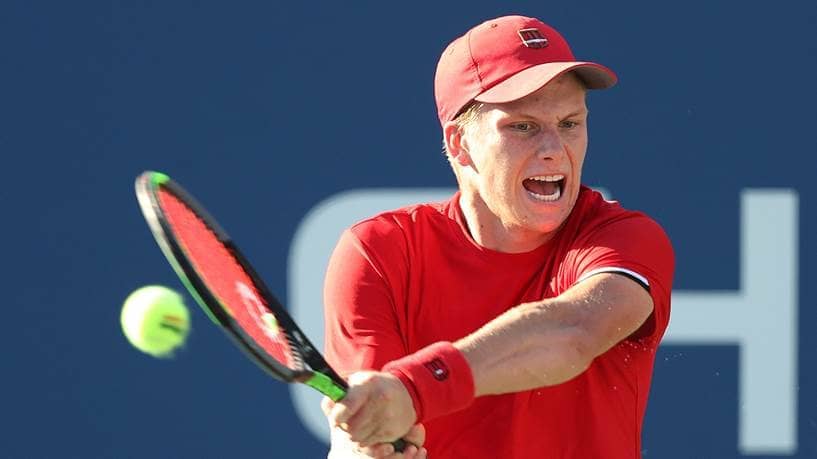 The ATP Race to Milan has entered the home stretch in October as #NextGenATP hopefuls pursue one of four remaining berths. The 2019 champion Jannik Sinner, Felix Auger-Aliassime, Carlos Alcaraz and Sebastian Korda have already qualified.

Only 236 points currently separate fifth and eighth spots for the Intesa Sanpaolo Next Gen ATP Finals. Jenson Brooksby is next in line to qualify and reached the second round at the BNP Paribas Open along with Brandon Naskashima, while Lorenzo Musetti and Holger Vitus Nodskov Rune fell in their opening matches in Indian Wells.

ATPTour.com looks at the leading contenders battling it out for a place in Milan.

No. 5 Jenson Brooksby
The 20-year-old American has enjoyed a breakthrough run on home soil in recent months, reaching his maiden fourth round at the US Open, where he beat the likes of Taylor Fritz and Aslan Karatsev before taking a set off World No. 1 Novak Djokovic. Only a month earlier, Brooksby stormed into his first ATP Tour final in Newport (l. to Anderson) and backed it up with a semi-final run in Washington, where he beat then No. 15 in the FedEx ATP Rankings Auger-Aliassime en route.

No. 6 Lorenzo Musetti
The chance to compete before his home crowd, close to his hometown of Carrara, gives the Italian further incentive to seal his place. The 19-year-old notched ATP Tour semi-finals in Acapulco and Lyon, where he fell to Stefanos Tsitsipas on both occasions, and in his Roland Garros debut, took down David Goffin and former semi-finalist Marco Cecchinato en route to the fourth round. He will be keen to rediscover his best form in the coming month, after winning just two of his past 12 matches.

No. 7 Juan Manuel Cerundolo
One of the most remarkable runs to a maiden ATP Tour title in 2021 came in Cordoba where a then World No. 335 Cerundolo won three rounds of qualifying and five main-draw matches on debut to land the silverware on home soil. The Argentine was the fifth-lowest ranked ATP Tour titlist since 1990. The 19-year-old added another trophy to his haul with a first ATP Challenger title in Rome and entered October on a 10-match winning streak with two further titles at this level.

No. 8 Brandon Nakashima
In a breakout two weeks, 19-year-old American Nakashima reached his maiden tour-level final in Los Cabos (l. to Norrie) in July and his second a week later in Atlanta where he upset top seed Milos Raonic en route to crack the top 100. He avenged that final defeat to his compatriot Isner in the first round of the US Open and arrived at Indian Wells having claimed 12 of his past 18 matches on hard courts.

No. 9 Holger Vitus Nodskov Rune
Grand Slam debuts don’t come much bigger than facing a World No. 1 under the lights on Arthur Ashe Stadium, but having won through qualifying, that was 18-year-old Rune’s reward at this year’s US Open. The Dane acquitted himself well as he took a set off Djokovic and with his first three ATP Challenger Tour titles already this season has soared from No. 473 in the FedEx ATP Rankings to the brink of the Top 100.

No. 10 Hugo Gaston
In the same week that Alcaraz captured his first tour-level trophy in Umag and Nakashima contested his first ATP Tour final in Los Cabos, Frenchman Gaston had a shot at his maiden title in Gstaad. The 21-year-old came up short against Casper Ruud but has reached an ATP Challenger Tour final in Tulln, Austria, and back-to-back semi-finals in Portugal at that level since to stay in the hunt for Milan.