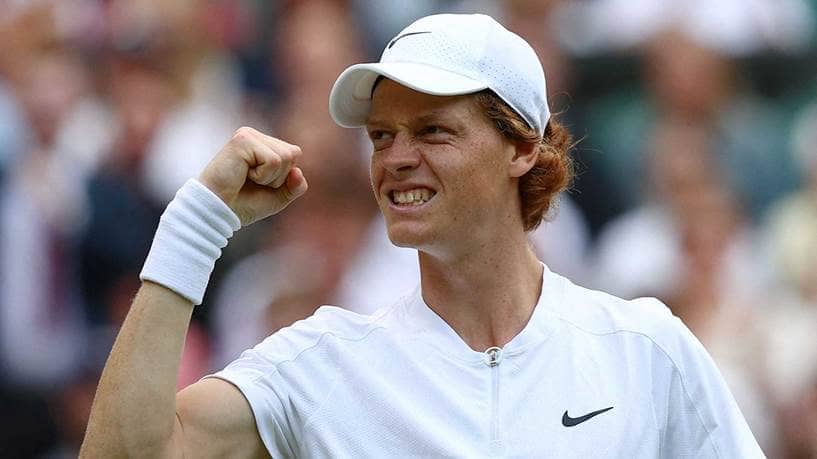 10th seed to take on Djokovic in quarter-finals

In a battle between two #NextGenATP prodigies, it was Jannik Sinner who found his groove on the grass on Sunday afternoon at Wimbledon.

The Italian produced a high-quality all-around performance to secure a 6-1, 6-4, 6-7(8), 6-3 fourth-round win against Carlos Alcaraz at the grass-court major. Despite Alcaraz finding some rhythm to save two match points and clinch the third-set tie-break, it was not enough to hold off an accomplished display from Sinner, who had not won a tour-level match on grass prior to his first-round win over Stan Wawrinka.

“Carlos is a very tough opponent and a very nice person, so it is always a huge pleasure for me to play against him," said Sinner in his on-court interview. "Today with such a great crowd and a special day today, 100 years [of Centre Court]. It’s just amazing.”

The match took place just hours after a celebration of 100 years of Centre Court that featured past champions including Novak Djokovic, Roger Federer, Bjorn Borg, Billie Jean King and Rod Laver. The 19-year-old Alcaraz and 20-year-old Sinner, both five-time ATP Tour titlists at a tender age, wasted no time demonstrating that the future of the sport is also bright with a high-octane clash at SW19.

The 10th-seeded Sinner showcased some relentless ballstriking in his three-hour, 35-minute victory. He read the Alcaraz serve to great effect, frequently finding blistering returns to heap pressure on the Spaniard’s delivery. Four breaks of the Alcaraz serve combined with a solid serving display proved enough for Sinner to level his ATP Head2Head series with the 19-year-old at 1-1.

”It’s tough when you have match point, and you still have to play [on]," said Sinner when asked about his fourth-set showing. "I tried my best, it is just part of the game, part of tennis, and obviously I am very happy how I reacted, because in the first [game] I was struggling. I am very happy to be in the next round and hopefully I can play some good tennis [then too].”

The fourth-round matchup between two of the brightest talents on the ATP Tour was the youngest match (in terms of combined age) at Wimbledon in the Round of 16 or later since 17-year-old Boris Becker defeated 21-year-old Henri Leconte in the quarter-finals in 1985.

Sinner fell to Alcaraz in straight sets in the pair’s previous tour-level meeting at the Rolex Paris Masters last November. The Italian appeared determined to dictate play from the start this time around, leaning into his returns whenever possible from the first Alcaraz service game. The tactic paid off, as Sinner reeled off five games in a row to breeze to the opening set.

Another break of the Alcaraz serve followed in the first game of the second set and, although the Spaniard began to settle into the match, that early setback proved decisive for Sinner to open up a two-sets-to-love lead. Everything the Italian tried seemed to work, most notably when he had the Centre Court crowd on their feet after he reacted quickly to a trademark Alcaraz drop shot with a deft winner of his own.

Alcaraz battled hard to find a response to the wave of Sinner aggression and the 19-year-old recovered 0/40 to hold his serve in the opening game of the third set. The Spaniard showed resilience again in the tie-break, fending off two match points before converting his fourth set point to stay alive in the match.

That ultimately proved futile as Sinner maintained his composure in the fourth set to secure victory, as his return game continued to wreak havoc. A solitary break in the fourth game proved decisive, and the Italian converted his sixth match point having struck 35 winners.