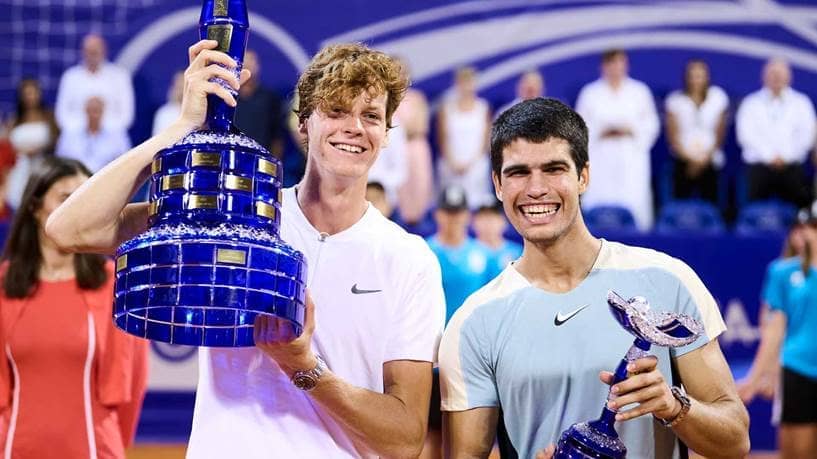 © Croatia Open Umag
Champion Jannik Sinner and finalist Carlos Alcaraz pose with their trophies after the final in Umag on Sunday.

It may have been a long time coming, but Jannik Sinner has an ATP Tour title in 2022.

The Italian prevailed in a heavyweight #NextGenATP championship match clash against Carlos Alcaraz 6-7(5), 6-1, 6-1 victory at the Plava Laguna Croatia Open Umag on Sunday.

Sinner has been one of the most consistent players on Tour this season and had reached six tour-level quarter-finals in 2022 prior to the clay-court ATP 250 event this week in Umag. The second seed had to be at his resilient best against Alcaraz, especially after the Spaniard had clinched a tight opening set in a tie-break. Yet the Italian began to dictate the baseline exchanges and saved nine from nine break points to complete a two-hour, 26-minute victory.

“I am obviously very happy,” said Sinner after the match. “I have [had] a tough year until now, I had some unfortunate moments, but we worked every time to play better, to be a better player, to be a better person. So, I’m very happy to be finally lifting a trophy this year, but I know that I still have a lot of things to improve… It’s all about the process.”

The win was Sinner's second against Alcaraz in four weeks, after the Italian was a four-set winner in the pair's fourth-round clash at Wimbledon.

A vital hold of serve in the second game of the second set was crucial to Sinner’s victory. The Italian fended off six break points to frustrate Alcaraz, going on to break the Spaniard’s serve immediately in the next game.

“That was a crucial point [of the match],” said Sinner. “I knew I had to stay there. He made some unforced errors, and I was very happy that I won this game. Then I returned well and raised my level a little bit, and I think I found a solution then.”

The match was the third tour-level meeting in a burgeoning rivalry between two of the ATP Tour’s brightest young stars, and the opening set lived up to the billing as both players produced some clean hitting and electric movement along the baseline. It was Alcaraz who made his move in the tie-break, which he led 5/1 before converting his third set point after a stunning defensive forehand forced Sinner to net a tricky half-volley.

Once Sinner had resisted the Alcaraz charge to hold his serve and level at 1-1 in the second set, however, the Italian took centre stage. Sinner was a constant threat in return games and he broke Alcaraz’s serve five times across the second and third sets to move into a 2-1 lead in the pair’s ATP Head2Head series.

Before this final, Sinner's six previous ATP Tour championship matches had come on hard courts. His triumph in Umag is the World No. 10’s sixth title, and the victory against Alcaraz improved Sinner’s record against Spanish players in 2022 to 8-0.

It was Alcaraz’s second championship match loss in as many weeks after he fell to Lorenzo Musetti in Hamburg last Sunday. Despite the disappointment of defeat, the Spaniard’s run in Umag this week to a Tour-leading sixth final of the year will lift him above Stefanos Tsitsipas to a career-high No. 4 in the Pepperstone ATP Rankings on Monday.