Alcaraz: 'I'm Going To Be A Great Player On Grass' 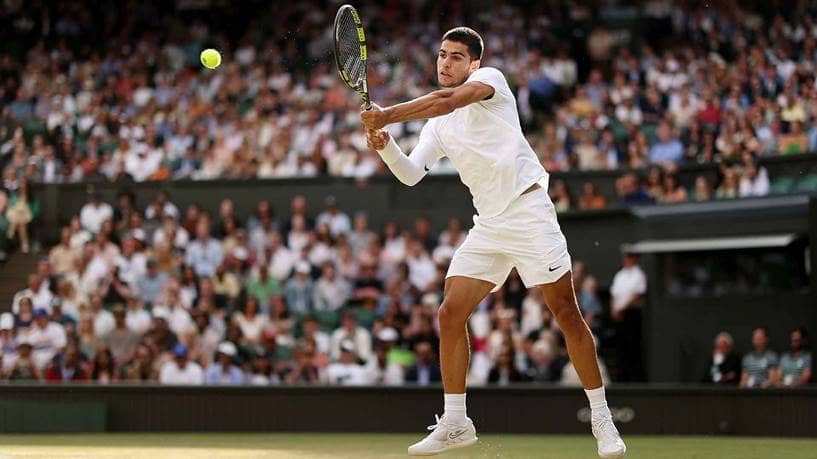 Spaniard lost to Sinner in the fourth round

Despite losing to Jannik Sinner in the fourth round on Sunday, Carlos Alcaraz believes that the grass-court experience he has gained at Wimbledon will greatly benefit him in the future.

The 19-year-old Spaniard, who was making just his second appearance at The Championships, downed Jan-Lennard Struff, Tallon Griekspoor and Oscar Otte as he brought his all-court game to the lawns in London.

“I felt really good here at Wimbledon playing on grass,” Alcaraz said in his post-match press conference. “I got a lot of experience playing on grass. Now I'm thinking that I could be a great player on grass. Next year I hope to play some tournaments before Wimbledon to adapt my game to get more used to playing here. But I would say I'm going to be a great player here on grass.”

Alcaraz’s clash against Sinner on Centre Court pitted two of the brightest talents on the ATP Tour against each other. In a heavy-hitting clash, it was the 19-year-old Italian who advanced in the youngest match (in terms of combined age) at Wimbledon in the fourth round or later since 17-year-old Boris Becker defeated 21-year-old Henri Leconte in the quarter-finals in 1985.

Alcaraz is excited by the prospect of a long-running rivalry with Sinner, with the former Intesa Sanpaolo Next Gen ATP Finals champions now locked at 1-1 in their ATP Head2Head series.

Alcaraz has enjoyed a standout 2022. The 19-year-old has captured a joint Tour-leading four titles, including two ATP Masters 1000 crowns, while in April he became the youngest player to crack the Top 10 of the Pepperstone ATP Rankings since Rafael Nadal in 2005.

However, the Spaniard admitted he struggled to find his best level when needed against Sinner, with his nerves playing a part in a disappointing afternoon.

“[At the] start [I] was really nervous. Playing on Centre Court is not easy for me,” said Alcaraz, who is 35-5 on the season. “Jannik handled it better than me, the nerves and the pressure. I was trying to get better, trying to think [about] what was happening… I was struggling a lot with my serve and couldn't return well.