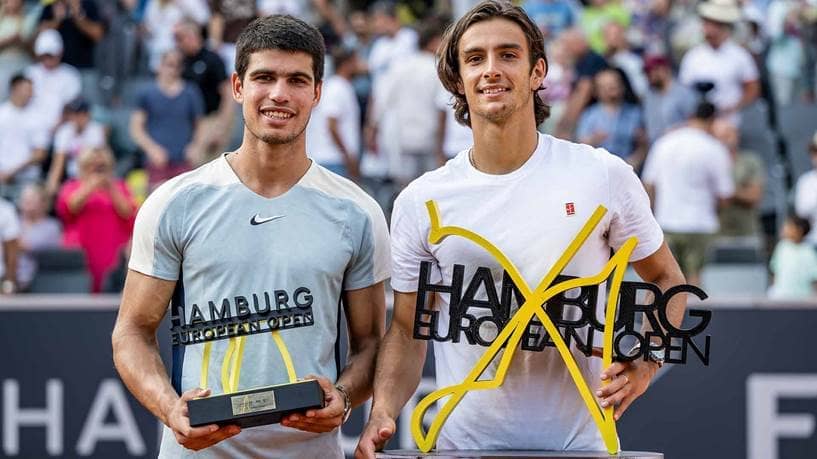 © Alexander Scheuber/Getty Images for Matchmaker
Carlos Alcaraz and Lorenzo Musetti pose with their trophies after Musetti won a three-set thriller on Sunday in the Hamburg final.

Nobody will soon forget how Lorenzo Musetti won his first ATP Tour title.

The 20-year-old let slip five championship points in the second set of the Hamburg European Open final on Sunday before stunning top seed Carlos Alcaraz 6-4, 6-7(6), 6-4 in an all-#NextGenATP battle to lift the trophy.

"But I cannot describe what I am feeling right now. I think I am still dreaming."

Entering the week, the Italian had not advanced to a tour-level final. But Musetti showed his mental fortitude against Alcaraz, who will climb to a career-high No. 5 in the Pepperstone ATP Rankings on Monday, to triumph after two hours and 47 minutes.

"Of course I was really upset, but I tried to not show my opponent my reaction. I tried to forgive[ myself for] all the match points and all the points [when] I couldn't do it," Musetti said. "I think that was the most [important] thing, even for me, because I didn't expect the win after all this roller-coaster, so I'm super happy to be here and to be the champion."

Musetti let slip two championship points while serving for the match at 5-4 in the second set and held another three in the ensuing tie-break, including two on his serve. But instead of letting the lost opportunity deflate him, he battled hard in the decider to lift the trophy, falling to the clay after Alcaraz missed a final shot long.

"For me, for my team, for my family, for my friends and for the people who really love me, I appreciate all the sacrifices that my family [made] and all the hard work that I put in with my team," Musetti said. "I will keep rolling for sure and I will continue like [this] hopefully."

This was the first ATP Head2Head clash between Musetti and Alcaraz. The Italian will climb to a career-high World No. 31 on Monday.

It was clear from early in the match that Musetti was going to throw all his skill at the Spaniard. The 20-year-old played aggressively from the baseline, moved into the net when given the opportunity and kept the five-time ATP Tour titlist off balance with plenty of variety in spin and pace.

Alcaraz was not at his flying best in the championship clash, making uncharacteristic errors, but that was in part because his opponent kept him guessing and he was unable to find rhythm.

Musetti earned the critical break of the first set at 3-3, moving ahead 4-3 when Alcaraz missed a backhand into the net. The Italian then closed out the opener with a forehand approach winner and showed laser focus in his calm reaction to his team.

Alcaraz showed his fighting spirit when he crushed a huge inside-in forehand winner to save break point in the first game of the second set. But he was unable to stave off his opponent’s push for long, hitting a drop shot into the net later in the game to relinquish the break.

Musetti held his nerve at 4-3 when he faced a 0/40 deficit on his serve. But the 20-year-old relied on his serve to get out of trouble.

All was going according to plan until 5-4, 40/15 in the set, when the Italian was unable to convert his two championship points. That gave Alcaraz a boost in energy and despite trailing 3/6 in the tie-break, he found a way to level and Musetti then double faulted to relinquish the set.

Despite the disappointment of watching his golden opportunity slip away, Musetti did remarkably well to recover in the third set. He maintained his level and pushed Alcaraz hard in the decider.

After Alcaraz missed a backhand long on the sixth championship point he faced, Musetti sank to the clay in celebration.

The Italian prevented the Spaniard from becoming the third man in the Open Era to win his first six tour-level finals. Alcaraz is now 14-1 at ATP 500 events this year after lifting trophies in Rio de Janeiro and Barcelona in addition to his ATP Masters 1000 triumphs in Miami and Madrid.