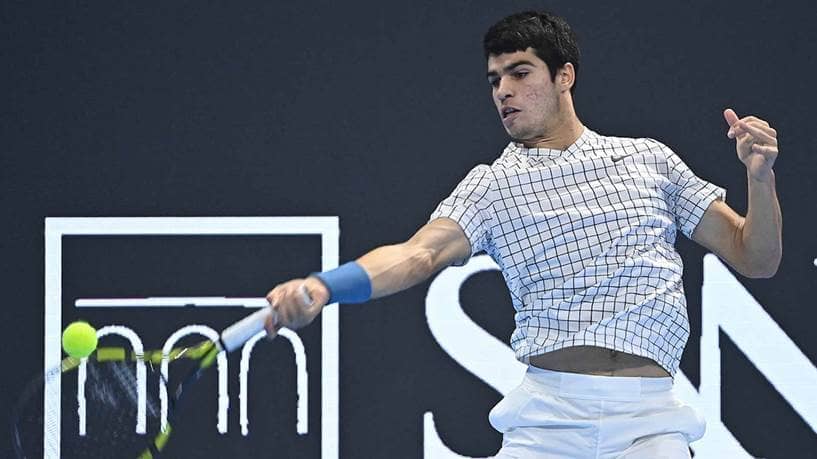 Spaniard has dropped just one set in Milan

Top seed Carlos Alcaraz is the youngest player competing at the Intesa Sanpaolo Next Gen ATP Finals this week. But the 18-year-old continued to impress Friday as he cruised into the final in Milan.

The Spaniard went 3-0 in the round-robin stage and produced another ruthless performance, soaring past Argentine Sebastian Baez 4-2, 4-1, 4-2 to advance after 62 minutes in their first tour-level meeting.

“It was a really good match from my side,” Alcaraz said in his on-court interview. “I knew I had to play really well and aggressively. He is playing at a great level and had a great week. I always think in the tough moments I have to be aggressive and have no nerves in that moment. If I lose that point in the tough moments it is because I have gone for it.”

Alcaraz imposed his aggressive heavy-hitting game on the World No. 111 from the outset at the Allianz Cloud. The Spaniard demonstrated great footwork, which allowed him to run around and dictate on his forehand, striking with vast amounts of power to outmanoeuvre Baez.

CARLOS CONFIRMED 🔒 Carlos Alcaraz will take on Sebastian Korda in the final of the @intesasanpaolo #NextGenATPFinals @alcarazcarlos03 👏 pic.twitter.com/9fHO4hdhJh

The World No. 32, who has just dropped one set en route to the championship match, will face second seed Sebastian Korda in the final after the American defeated countryman Brandon Nakashima 4-3(3), 2-4, 1-4, 4-2, 4-2. If Alcaraz wins the title, he will become the youngest player since Andrei Medvedev, 18, to record 32 wins in a season, after the Ukrainian went 32-11 in 1992.

“The final is going to be really, really tough,” Alcaraz said. “Sebastian is playing great tennis and I am really excited to play against him for the first time. It would be amazing to win the title, but I am going to be facing a really good opponent, so we will see.”

In a strong serving display against Baez, Alcaraz won 32 of 37 of points behind his first delivery and saved all three break points he faced. The Spaniard hit 16 winners and committed just 11 unforced errors to end Baez’s hopes.

Earlier this year, under the guidance of coach Juan Carlos Ferrero, Alcaraz made headlines when he upset World No. 3 Stefanos Tsitsipas en route to the quarter-finals at the US Open. The Spaniard also captured his maiden tour-level title in Umag and recorded Top 10 wins against Matteo Berrettini and Jannik Sinner in recent weeks.

Baez had never played a tour-level hard-court match before this week. But the 20-year-old, who won five ATP Challenger Tour titles on clay this year, overcame home favourite Lorenzo Musetti and Hugo Gaston to reach the semi-finals at the 21-and-under event.