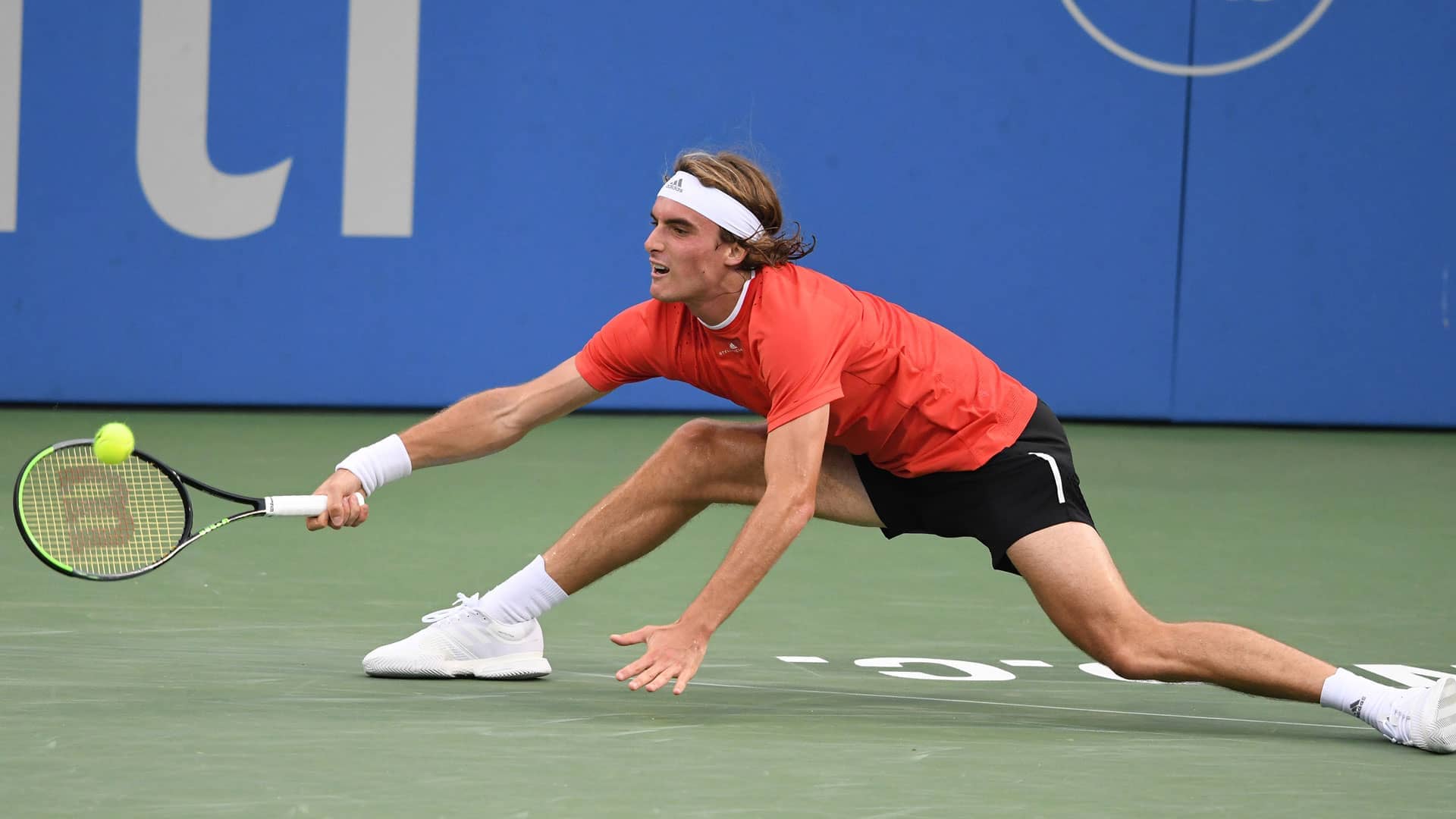 Stefanos Tsitsipas is through to the Citi Open semi-finals without dropping a set. © Mitchell Layton/Getty Images

Stefanos Tsitsipas put in a performance worthy of his top seed status on Friday at the Citi Open, winning eight consecutive games to reach the semi-finals over No. 10 seed Benoit Paire of France 7-5, 6-0.

“I’m glad that I played well today,” said Tsitsipas. “I think I closed out the second set very professionally, very aggressively. I think that’s good for me psychologically. I didn’t give him much pace to play with and that played a big part overall.”

Paire has been in top form this season, winning titles in Marrakech (d. Andjuar) and Lyon (d. Auger-Aliassime). The 30-year-old hung tough with the #NextGenATP Greek in the opening set and matched his power from the baseline, but the top seed raised his level when it mattered most. At 5-5, Tsitsipas won eight consecutive points to grab the early advantage.

With Tsitsipas serving in the second set at 2-0, 40/40, his shoe laces broke and he went to his chair for a shoe change. The mid-game delay rattled Paire and he voiced his displeasure to the chair umpire.

What's your stance on the unusual situation? pic.twitter.com/Bg1mAikUCm

“I've been struggling with it. One of few players that has been struggling with it,” said Tsitsipas. “I'm not doing it on purpose. It always happens in crucial moments like this when I'm really trying hard, giving everything out on the court, trying to get every single ball back. It's very irritating for me to keep playing with a shoe that's not tight. It can fall off at any moment during the rally.”

When play resumed, Tsitsipas won 15 of the next 20 points to advance in 75 minutes and even his FedEx ATP Head2Head with Paire at 1-1. Tsitsipas hasn't dropped a set this week in booking his seventh tour-level semi-final of the season.

Tsitsipas will now see Nick Kyrgios across the net after teaming up with him this week in doubles. The Aussie produced a red-hot performance to defeat Slovakian lucky loser Norbert Gombos 6-3, 6-3.

"I’m super happy that all the work I’ve been doing off the court is translating on the court. Four days in a row and four matches at my highest level. I’m pretty happy about it,” said Kyrgios. “I love playing night matches. The crowd gets into it, so I’m just trying to give them some fun tennis and also give them some wins as well."

Kyrgios fired 26 winners to just 10 unforced errors, with 15 of those winners coming in the second set. The 24-year-old hammered 19 aces and only lost eight points on serve (37/45) to advance in 57 minutes. Kyrgios is through to his first ATP Tour semi-final since taking the title in Acapulco this March (d. Zverev) and will look to score his first Top 10 win since that event.

“He’s an amazing player and I have the utmost respect for him,” said Kyrgios. “He goes about it differently than me. We’ve gotten to know each other this week and we’re literally the polar opposites! It’s going to be a lot of fun, so I’m excited for it.”

The Aussie's entertainment value even went beyond the flashy shotmaking he displayed on Stadium Court. After firing an ace on match point, he ran to a fan in the front row and received a congratulatory hug and kiss.

“You never know what to expect from him,” said Tsitsipas. “I think his serve is the biggest weapon in his game. In the rally, he sometimes goes for crazy shots. He’s unpredictable. He just seems very relaxed when he plays. I'm going to have to be careful of his shot selection, trying to execute and not play his game, [but] play my game.”