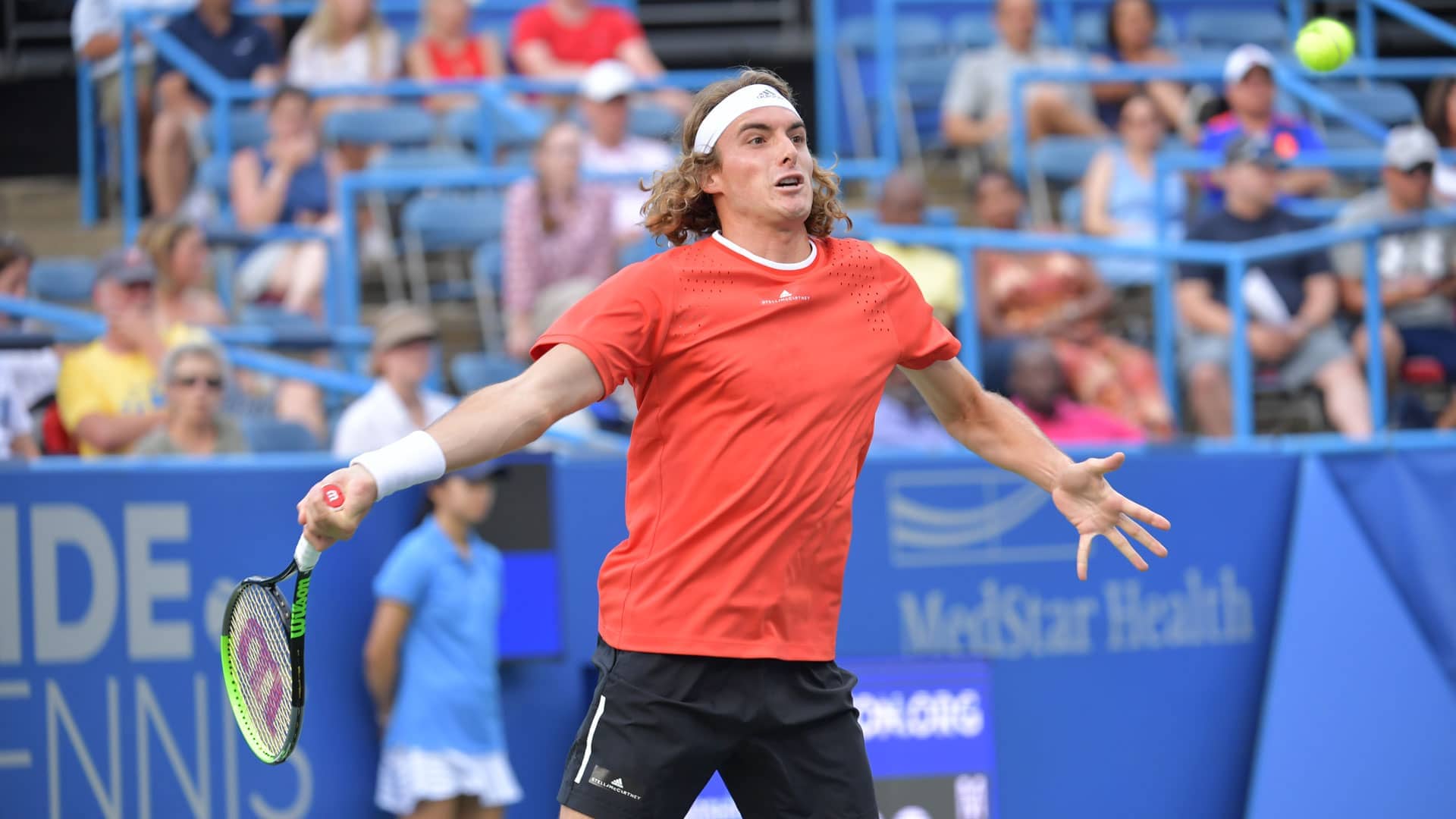 Stefanos Tsitsipas is through to the Citi Open quarter-finals without dropping a set. © Peter Staples/Citi Open

Top seed Stefanos Tsitsipas stepped up when it mattered most against Aussie Jordan Thompson on Thursday at the Citi Open, saving a set point in the second set to prevail under the lights 6-3, 7-6(4).

“It’s very pleasing knowing that I can be mature and handle those situations very bravely, so I’m really happy with that," said Tsitsipas. "I showed character out there. I played heroic tennis, I would say, in those crucial moments. That was very nice to see.”

Next up for Tsitsipas is No. 10 seed Benoit Paire of France, who lost just three first-serve points (31/34) to defeat fifth-seeded American John Isner 7-6(3), 6-3. Paire hammered 12 aces and didn't drop serve to even his FedEx ATP Head2Head rivalry with Isner at 1-1. Paire won his lone FedEx ATP Head2Head meeting with Tsitsipas two years ago in Metz.

“When I stick to my game and find the way I have to execute my game plan, not pay attention too much to what my opponent is doing on the other side of the court, I usually play my best, as you saw last year in Toronto," said Tsitsipas. "That’s exactly what I was doing and it was working pretty well, so I’m trying to focus on that.”

A single break of serve was all the #NextGenATP Greek needed to secure the opening set. Both players held serve throughout the second set to force a tie-break, with Tsitsipas coming up clutch down set point on his serve at 4-5 with a strong first-serve delivery. A tense tie-break saw Thompson hit a forehand into the net to give Tsitsipas a 5/3 lead and the mini-break advantage was enough for the top seed to secure victory in one hour and 40 minutes.

The victory puts the #NextGenATP Greek into his 10th ATP Tour quarter-final of the season. Tsitsipas seeks his third ATP Tour title of the year after prevailing in Marseille (d. Kukushkin) and Estoril (d. Cuevas).

Nick Kyrgios was at his entertaining best in moving past Japanese Yoshihito Nishioka 6-2, 7-5. The Aussie unleashed a torrent of forehand winners on Stadium Court and broke Nishioka twice in each set, but even brought a smile to his opponent's face during the match. Kyrgios moved to 3-0 in his FedEx ATP Head2Head rivalry with Nishioka.

Expect the unexpected with @NickKyrgios! 😂

“I came out on fire,” said Kyrgios. “it’s good to see [Nishioka] back on the court and producing the level he can. He competes like a dog and he’s an unbelievable athlete. I’m going to play a lot of matches against him and I’m not really looking forward to it!

“I’ve got some people working with me on the mental side of things because I want to make improvements. I’m winning matches and there are some glimpses of that.”

Awaiting Kyrgios in the last eight is Norbert Gombos, who took full advantage of his lucky loser placement in the draw to defeat #NextGenATP Serbian Miomir Kecmanovic 1-6, 6-3, 7-6(4). The 28-year-old Slovakian, who was selected into the draw due to Kevin Anderson's withdrawal with a right knee injury, prevailed in two hours and eight minutes for his first ATP Tour quarter-final since 2017 Marseille.