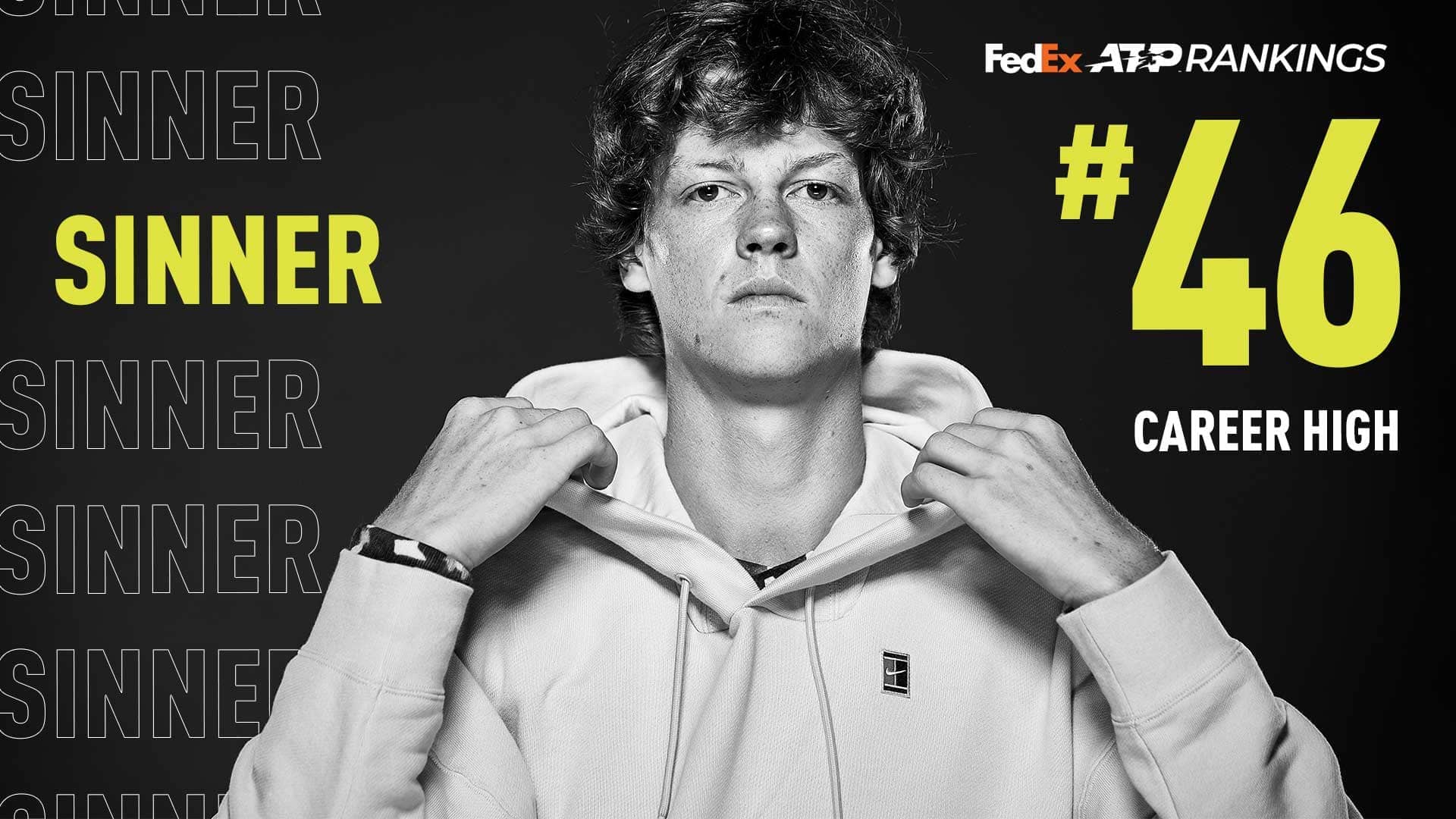 No. 46 Jannik Sinner, +29 (Career High)
Jannik Sinner’s rapid rise up the FedEx ATP Rankings reached another milestone on Monday, when the #NextGenATP Italian broke into the Top 50 for the first time.

The reigning Next Gen ATP Finals champion entered last month’s Internazionali BNL d'Italia in Rome at No. 81. Playing at home brought the best out of the 19-year-old, who claimed wins against Benoit Paire and Stefanos Tsitsipas to reach his maiden ATP Masters 1000 quarter-final (l. to Dimitrov).

During his first appearance at Roland Garros, Sinner became the first tournament debutant since Rafael Nadal in 2005 to reach the quarter-finals. The youngest player in the Top 140 did not drop a set in his opening three matches, which included a second win this year against David Goffin, before battling past World No. 7 Alexander Zverev in four sets.

Sinner’s run in Paris came to an end at the hands of eventual champion Nadal on Court Philippe-Chatrier. The Italian’s impressive performances in Paris have catapulted him 29 positions to a career-high No. 46 in the FedEx ATP Rankings.

No. 8 Diego Schwartzman, +6 (Career High)
As was the case with Sinner, Diego Schwartzman built on a breakthrough performance in Rome to achieve success in Paris. In his first event since reaching his maiden ATP Masters 1000 final at the Internazionali BNL d'Italia (l. to Djokovic), the Argentine reached the Roland Garros quarter-finals without dropping a set.

At that stage, Schwartzman recorded one of the biggest wins of his career to reach his first Grand Slam semi-final. The 5’7” right-hander outlasted close friend and two-time Roland Garros runner-up Dominic Thiem in five sets. Schwartzman, whose campaign was also ended by Nadal, breaks into the Top 10 of the FedEx ATP Rankings for the first time at No. 8.

No. 10 Andrey Rublev, +2 (Career High)
Andrey Rublev’s stellar 2020 season continued at Roland Garros, as the Russian reached his second straight Grand Slam quarter-final. After arriving in Paris late, following his Hamburg European Open final victory against Stefanos Tsitsipas, Rublev was forced to recover from two sets down for the first time in his career against Sam Querrey in the first round.

The 22-year-old built on that comeback victory with wins against Alejandro Davidovich Fokina, Kevin Anderson and Marton Fucsovics to reach the last eight in Paris for the first time. Rublev, a three-time ATP Tour titlist this year, jumps two spots to a career-high No. 10 in the FedEx ATP Rankings.

No. 50 Marton Fucsovics, +13
Marton Fucsovics has been a consistent performer since the return of the ATP Tour in August. The Hungarian, who made third-round appearances at the Western & Southern Open and the US Open, went one better at Stade Roland Garros.

The 28-year-old reached the Round of 16 at a Grand Slam for the third time, upsetting Daniil Medvedev in the first round before claiming wins against Albert Ramos-Vinolas and Thiago Monteiro. The 6’2” right-hander, who owns a 14-8 record in 2020, climbs 13 places to No. 50 in the FedEx ATP Rankings.