How Shapovalov Is Trying To Channel His Inner Federer 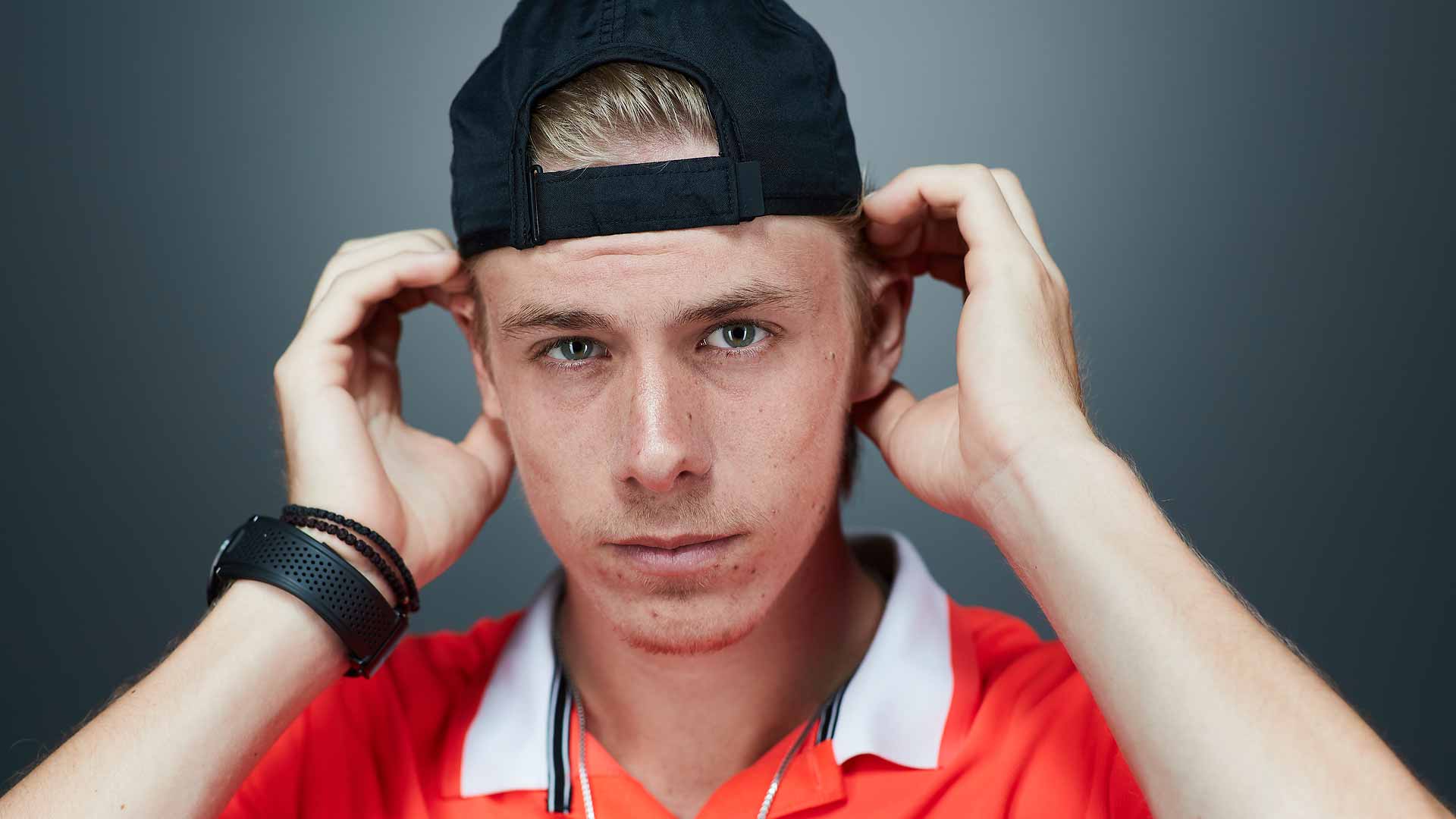 #NextGenATP Canadian Denis Shapovalov has already made two ATP Masters 1000 semi-finals, beaten Rafael Nadal, and he is now on the verge of the Top 20 of the ATP Rankings. But the 19-year-old knows he’s not perfect, and that’s what could propel him to the next level.

“There are a lot of things that I can improve and work on,” Shapovalov said.

The teen certainly wears his heart on his sleeve. In Miami last year, Shapovalov defeated home favourite Sam Querrey 7-5 in a third set and pointed at his left forearm, yelling “I’ve got ice in my veins!” You’ll never leave a Shapovalov match feeling that he lacked energy, from his high-flying one-handed backhands to celebratory roars after big points.

The teenager’s coach since the back-end of last season, Rob Steckley, has been working alongside Shapovalov’s Mom, Tessa Shapovalova, on harnessing his charge's emotions during matches. While many times his fire is a great thing, sometimes it isn’t.

In the second round of last year’s Shenzhen Open, Shapovalov held two match points against Japan’s Yoshihito Nishioka. On one of those opportunities, the lefty dumped a volley into the net. According to Steckley, Shapovalov, ‘let his head spin out of control’ and ultimately lost the match. Nishioka went on to win the tournament.

“I remember regrouping after the match and he was pretty disappointed with losing that, heartbroken. That one stung,” Steckley said. “I remember telling him that there’s two ways of going about this: You can either let this affect you or we can learn from this very quickly, because I’ll bet my life you’re going to be in the same exact position. You’re going to have a match point, whether it’s a serve, a volley or a forehand, but you’re going to have the exact same scenario next week and the week after, so it’s how we bounce back and learn from this.”

When Roger Federer was a rising junior, he showed plenty of fire and desire to win. Eventually, he internalised that with experience and now, the Swiss is a 100-time tour-level champion. Like Federer, Shapovalov is not the first person to try harnessing his emotions on court.

“That of course could be a big step for me. I’m still trying to mature and have a better attitude on court,” Shapovalov said. “I really look up to Roger in that case. He was pretty emotional himself on the court and he found a way to change himself and become the great ambassador and the role model he is today, so I’m hoping to follow his path.”

Shapovalov has shown that he is talented enough to hang with anyone on the ATP Tour. At the Australian Open, he was one of just two players to take a set from World No. 1 Novak Djokovic. Shapovalov’s abilities are no secret, either.

At this week’s Miami Open presented by Itau, he is competing in doubles on top of singles, partnering Indian Rohan Bopanna. The former World No. 3 doubles player, who also teamed with the Canadian in Indian Wells, has been impressed.

“I think he’s a very, very fearless player. He goes out there, irrespective of who he’s playing against. He plays an attacking game, which makes him dangerous,” Bopanna said. “That single-handed backhand that he hits, he takes it on the rise, he’s very aggressive, and he’s got a great serve. He’s not afraid to come to the net and finish those volleys. If he wants, he can just hang in there from the back, so he’s got a lot of variety in his game, which makes him a complete player. I think he’s going to be at the top for a long time.”

Hanging in rallies is another part of Shapovalov’s game that Steckley is honing in on. The Canadian is a proven shotmaker off both baseline wings, but it’s about choosing when to be most aggressive.

“[It’s about] learning to stay in the rallies and that it’s okay to stay in the rallies and that he can hang in with the best of them, and learning when to pull the trigger and when to play his ‘A’ game and when it’s okay to play ‘B’ game,” Steckley said. “I think that transition mentally will allow him a lot more success in the near future. It’s coming."

While it was not match point, Shapovalov was in a situation that could have unraveled many teenagers on Friday. Early in the third set against Daniel Evans — who had won both of his previous professional matches against the Canadian — Shapovalov failed to convert three break points, missing routine forehands on two of them. But instead of battling his mind, he remained calm and broke in the same game, eventually charging into the third round.

“I knew going into the match that I’ve been seeing the ball in his service games a lot and in the second set I think I broke him twice,” Shapovalov said. “So I was fairly confident even if I was missing a couple forehands that I should just keep going. I think that gave me confidence.”

It wasn’t about reinventing the wheel or changing the gameplan. It was just understanding that he won 38 per cent of return points in the match, and if he refocused, another opportunity would come.

“I always remind myself to just think about the next point, forget about the rest and just keep going forward,” Shapovalov said.

There’s little doubt that Shapovalov will continue his ascent up the ATP Rankings. But it’s easy to forget that he is still just 19. So while the world is watching Shapovalov grow, it’s more of a matter of when, not if, he makes more big breakthroughs.

“Being 19, everybody wants things as fast as the next person. I think it’s just understanding the process of trying to get him to really buy into understanding that it’s okay to buy some time and not want things too fast,” Steckley said. “When you want things too fast, the expectations become even bigger and then you start to get lost and you play with a little bit of fear and hesitation. So I think it’s just understanding that it’s okay to go at 60 kilometres an hour rather than 160. They both get there.”