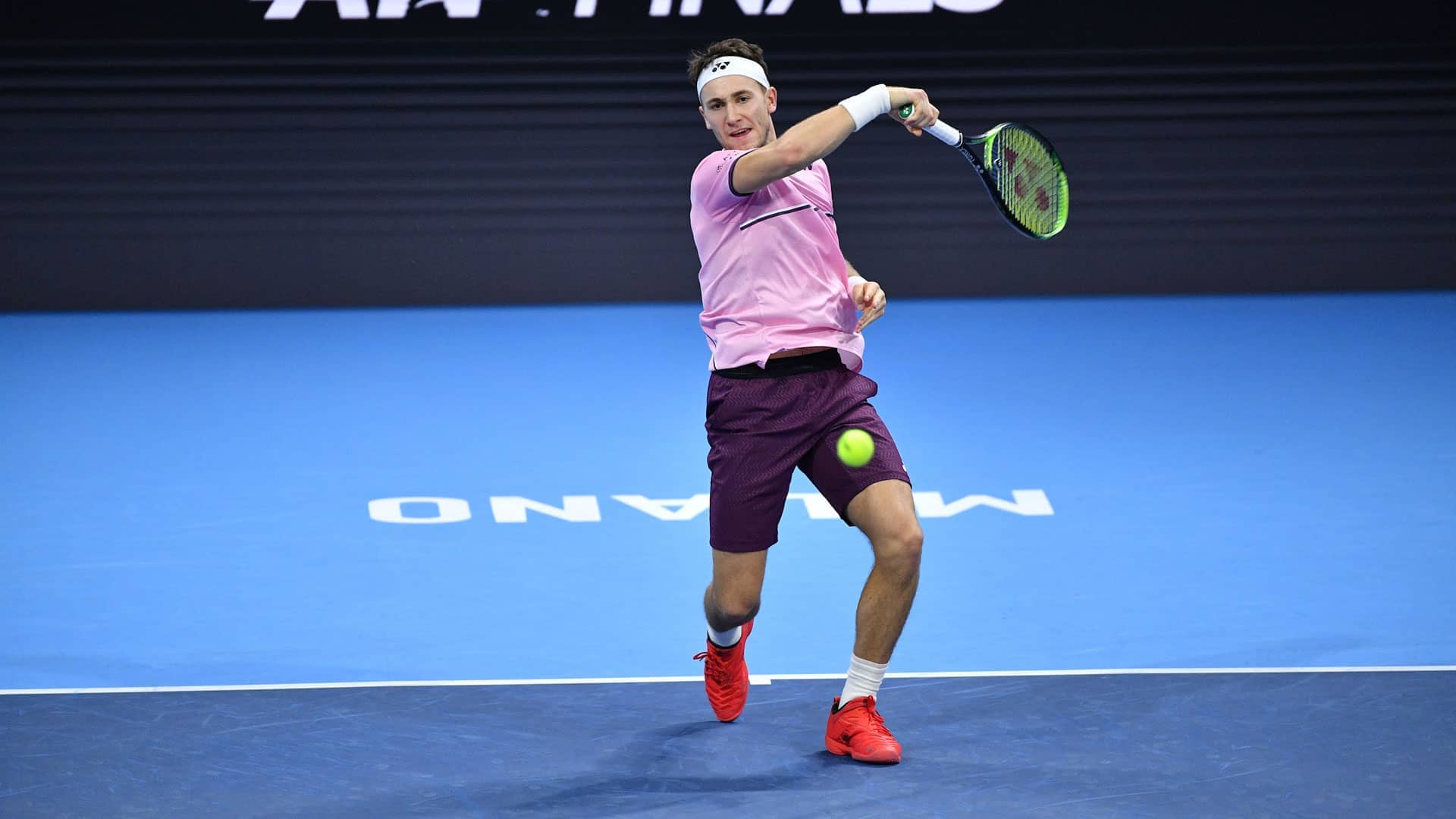 Casper Ruud moves to 1-1 in Group A on Day 2 at the Next Gen ATP Finals. © Peter Staples/ATP Tour

Casper Ruud used all of his mental toughness to pick up his maiden win at the Next Gen ATP Finals on Wednesday, weathering several momentum shifts in his match with Spaniard Alejandro Davidovich Fokina to prevail 3-4(2), 4-3(2), 4-2, 3-4(2), 4-1.

“It was a lot of ups and downs and also the first five-set match that I’ve won,” Ruud said. “It can only be a couple of points from winning or losing. [Davidovich Fokina] is a really strong fighter and it was a very good match.”

Their clash at the Allianz Cloud featured several milestone moments. The Norwegian’s victory is the first five-setter of this year’s event and had more games (32) than any match in tournament history. Ruud also utilised the first-ever video review in the opening game of the match.

Ruud has enjoyed a breakout season that has seen him climb more than 50 spots in the ATP Rankings, recording his first ATP Tour final in Houston (l. to Garin) alongside a pair of semi-finals in Sao Paulo and Kitzbühel. He moves to 1-1 in Group A, while Davidovich Fokina drops to 0-2.

The Norwegian's historic video review took place at 30-30 in the opening game. The umpire stopped the point and declared that Ruud’s lob touched the bottom of the jumbo screen. Ruud challenged the call, but the review showed that the call was correct.

Both players traded a pair of service holds to begin the opening set. Davidovich Fokina came alive in the tie-break, ripping a forehand return winner on the first point and following it up with a backhand winner at 3/1 for a double mini-break advantage. He closed out the set after Ruud sent a forehand wide.

Little separated Ruud and Davidovich Fokina in the second set and they went to another tie-break. But the Spaniard’s flashy shotmaking ultimately betrayed him as he hit a wild forehand error and missed a pair of volleys to allow the Norwegian to level the match.

With Davidovich Fokina serving at 0-1, 0/15, he fell attempting to hit a forehand and his right knee buckled as he collapsed to the ground in pain. He soldiered on after a lengthy medical timeout, but his movement appeared restricted and Ruud coasted through the remainder of the set.

Read More: Ruud: 'This Is The Week We've All Been Waiting For'

Miraculously, the Spaniard’s movement improved dramatically in the fourth set. He stayed with Ruud in the baseline exchanges and earned a break at 1-1, roaring in delight as he motioned for the crowd to get out of their seats. Davidovich Fokina couldn’t convert a set point at 3-2 and pushed a backhand volley long, but regrouped strongly in the tie-break. Any questions about the state of his knee were answered after he leaped into a forehand winner on set point at 6/2.

But the dramatics of the match finally caught up with Davidovich Fokina and he appeared to tire in the closing stages. Ruud, who had remained calm throughout the clash, appeared to still have plenty of energy. The Norwegian raced through the deciding set and a backhand error from Davidovich Fokina wrapped up play after two hours and 17 minutes. Ruud finished the day with 28 winners to 19 errors.