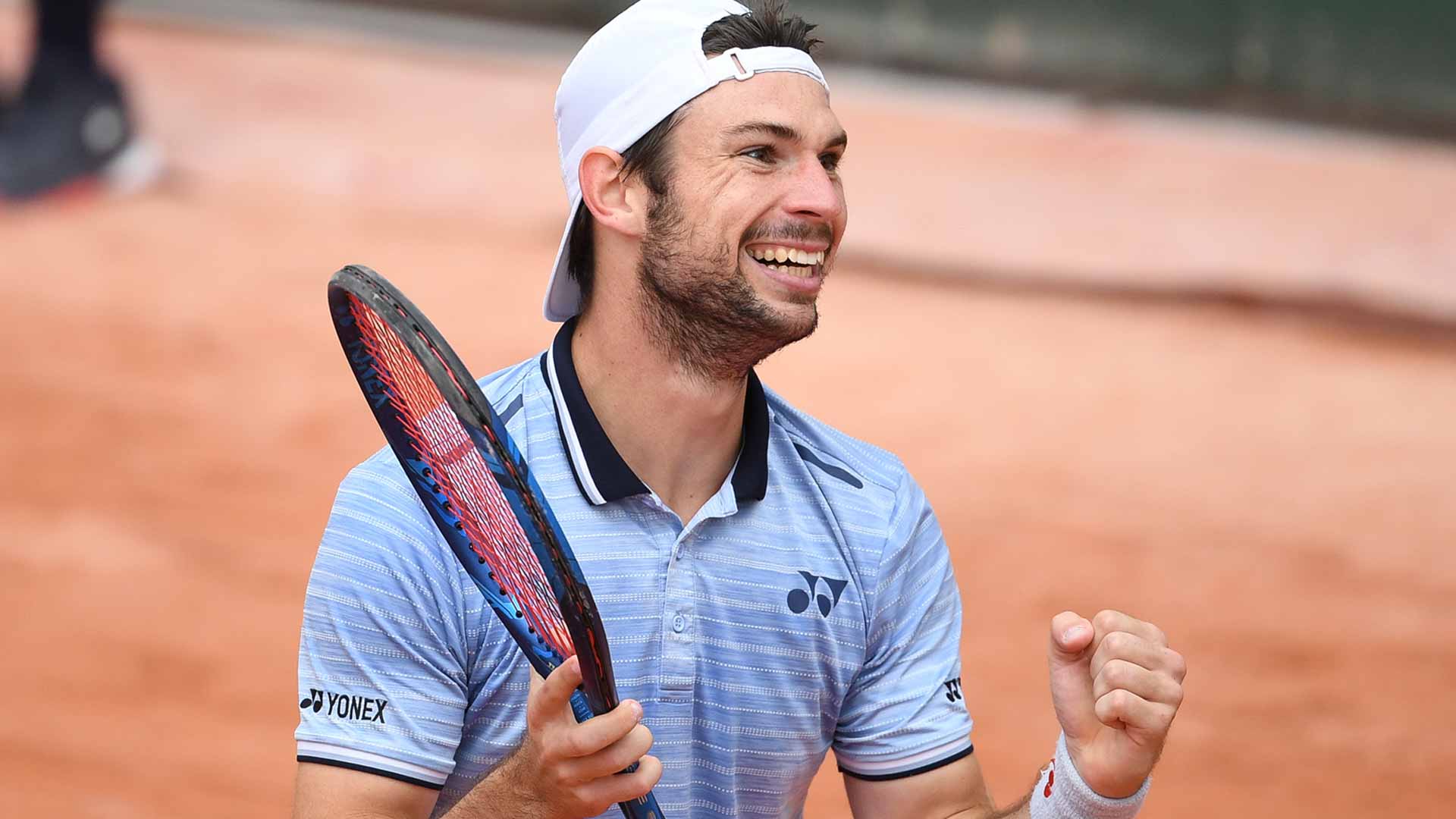 As Jurij Rodionov collapsed to the terre battue on Court Suzanne-Lenglen, after four hours and 36 minutes, one thing went through his mind:

"Relief," exclaimed the #NextGenATP Austrian. "Honestly, when I won the match and sat down on the bench, I was thinking how happy I was that it's over. I didn't want to play this match anymore. Mentally and physically I was over the limit."

Exhausted and weary, Rodionov stumbled over to his chair. Never had the 21-year-old experienced such a moment in his young career. Making his Grand Slam debut on one of the biggest show courts in the world, and rallying from two sets down against home favourite Jeremy Chardy, it was all so overwhelming. On his seventh match point, Rodionov secured a victory he'll never forget, triumphing 3-6, 4-6, 7-6(6), 6-4, 10-8 at Roland Garros.

Even two days later, for perhaps the first time in his career, the charismatic and affable Austrian was unable to express his emotions.

"I can't put it into words. One week ago, if someone said that I would be in the second round of a Grand Slam, I would have said that they're crazy. Suddenly I'm in this situation, beating Chardy 10-8 in five sets and from a match point down. I'm just trying to enjoy the moment right now."

One thing is for sure: Rodionov will never forget this moment. For that matter, the same could be said about his entire 2020 campaign. Coming off a disappointing season, this was precisely what he needed to not only rediscover his top form, but re-instill belief in himself.

If Rodionov's hometown of Matzen, Austria, had allowed him to play organized football as a child, this could have been a much different story. The World No. 170 explains that he wanted to play a sport ever since he was four, but his town would not permit children to play football until age six.

"I decided to play tennis instead. When I turned six, I played both sports at the same time. But at age 10, I stopped playing football and started focusing more on tennis. The closest tennis court was only a 10-minute walk from our house. I wanted to play a sport, so it was the logical choice. It was a good decision."

Three years ago, at the age of 18, Rodionov made an immediate splash on the professional scene, notching his first Top 100 win in his ATP Challenger Tour debut. From a set and a break down, he stunned then-World No. 76 Jordan Thompson in Ningbo, China. And one year later, he would lift his first Challenger trophy on the clay of Almaty, Kazakhstan.

Everything was going exactly as planned for the surging Austrian teen, as he cracked the Top 200 of the FedEx ATP Rankings at the age of 19. But 2019 proved to be a reality check for Rodionov, as he struggled to develop his game and build his confidence. The experience taught him a valuable lesson: expect the unexpected.

In search of a renewed approach and fresh perspective, Rodionov brought on former Top 30 star and three-time ATP Tour champion Javier Frana to provide the spark he needed. The decision has paid off in a big way, allowing the left-hander to take the next step in his career.

"One year ago, I wouldn't have been ready to win that match," Rodionov told ATPTour.com. "But over the COVID break, I prepared my body for this, and mentally Javier has helped me a lot. I think that last year I would not have been able to get there from the mental side. He has so much experience and is a great coach for me. On and off the court, he just knows what a player like me needs. There's a huge respect between ourselves. From a human perspective and a tennis perspective, it's been really good. That's the main thing.

"In the beginning of my career, I was a trickster playing a lot of drop shots and tweeners. I was playing for fun, because I liked it. But later, when I became a professional and started playing Challengers, that style didn't work. I still love to hit a good tweener, but I needed to be more disciplined. Javier has helped me with that."

Their partnership clicked from the start. Literally. In their first tournament together, in February, Rodionov lifted the trophy on the indoor hard courts of Dallas. And just two weeks later, he would add another Challenger crown in Morelos, Mexico.

From entering Dallas with the goal of winning just one match, Rodionov enjoyed the best month of February of any player on the ATP Challenger Tour. He posted a 15-2 record, soaring to a career-high No. 166 in the FedEx ATP Rankings.

"He is discovering everything he is capable of," said Frana. "When we first started, I was just finishing my time working in television. I suggested that we work for three weeks together and see what happens from there. We met in Dallas. It was our first tournament together and he won the title. It was incredible.

"Now, in a Grand Slam and against a very good player, it was exciting and a very big challenge for him. It also became an accelerated course for Jurij, for him to learn and be able to discover things that he knew he was able to achieve. These are signs that will be very valuable in the future."

Under Frana's tutelage, Rodionov understands that a match like this will benefit his progression in the long run. The Austrian faced a season's worth of adversity in the span of four hours and 36 minutes. From trailing by two sets to none, to facing a match point in the third set tie-break, to failing to serve out the encounter on two occasions and seeing six match points slip away in the deciding set, it made Rodionov dig deep like never before. And it forced him to summon all those lessons learned under Frana in his breakthrough month of February on the Challenger circuit.

"When I was two sets down, I just wanted to enjoy it. I think I was more relaxed knowing that it could have been my last set. I started hitting bigger and was risking more. It was my first Grand Slam, so I'd be stupid to not fight for it. I wanted to take every chance I could get."

When asked if any doubts crept into his mind after six match points came and went, Rodionov did not hesitate.

"I thought that after my first match point. It was 40/15 on my serve at 5-4 in the fifth set. Until that point, I was playing very solid and serving good and stepping into the court. Then suddenly it was match point and I started to push the ball. I thought to myself, 'This can't be happening, what am I doing?' I was so tight. I could barely hit my serve. But I kept telling myself to play my game and stay solid. Luckily, on the seventh try I got through."

Rodionov has Belarusian heritage in his blood. His parents, Sergui and Galina, are natives of Belarus and moved to Nuremberg, Germany in 1996. Three years later, Jurij was born. They relocated to Austria soon after.

One of just five players with multiple Challenger titles this year, Rodionov is hoping to continue his push towards the year-end Top 100 at Roland Garros. Next up is a second-round encounter against Norbert Gombos on Court 11 on Wednesday. It will be their first meeting.

"I'm very proud of myself, but I'm still in the tournament and I have a lot of chances to achieve more. Now I'm focusing on what to do next, rather than how well I did in the first round. After the week, I will look back on my accomplishments, but now I am looking forward to Wednesday. Step-by-step, match-by-match."