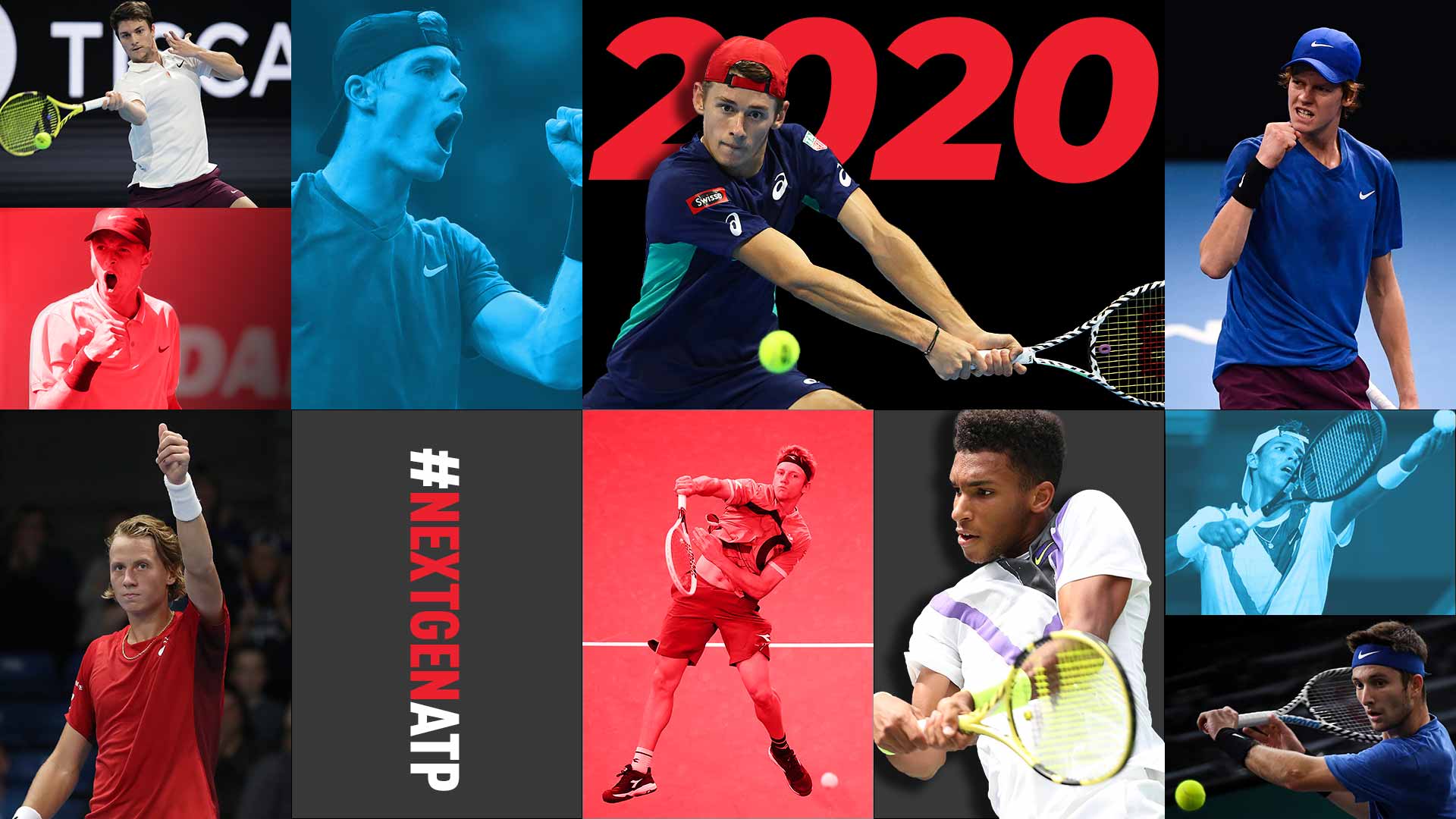 The top #NextGenATP players will look to make plenty of headlines in 2020. © Getty Images/ATP Tour

1. Denis Shapovalov, No. 15 in the ATP Rankings
Shapovalov will bring loads of momentum into the 2020 season. The left-hander won his maiden ATP Tour title at the Intrum Stockholm Open (d. Krajinovic) in October and reached his first ATP Masters 1000 final at the Rolex Paris Masters (l. to Djokovic) in November.

🇨🇦 How good was that, @denis_shapo fans?! 🇨🇦

2. Alex de Minaur, No. 18
The 20-year-old Aussie fell short in his second Next Gen ATP Finals title match last month. But if De Minaur isn't in London at the Nitto ATP Finals in November 2020, you can almost guarantee – barring injury – the Aussie will once again be back in Milan playing with the best 21-and-under players.

In 2019, De Minaur only built on his breakout 2018, winning three ATP Tour titles in Sydney, Atlanta and Zhuhai. He ended the season at a career-high ATP Ranking of No. 18.

Auger-Aliassime, along with De Minaur and Shapovalov, will compete at the inaugural ATP Cup, to be held 3-12 January in Brisbane, Perth and Sydney.

"I never thought of doing anything else."

4. Miomir Kecmanovic, No. 59
The 20-year-old Serbian made his debut last month at the Next Gen ATP Finals, going 2-1 in round-robin play and reaching the semi-finals. Expect Kecmanovic, who was nominated for the 2019 Newcomer Of The Year Award, to return to Milan and reach more ATP Tour finals (2019 Antalya) next year.

5. Jannik Sinner, No. 78
Sinner was No. 553 at the start of the 2019 season and needed a wild card to play at the 2019 Next Gen ATP Finals. But the 18-year-old was one of the stories of the final month of the season, going 4-1 in Milan and beating De Minaur in the title match to gain one of the biggest wins of his young career.

Thank you so much to my fellow players for picking me ✌️ It’s an honor! @atptour #newcomeroftheyear @PiattiTennis @RPiatti https://t.co/z0wRX2FseW

6. Corentin Moutet, No. 83
France's Moutet, who made the third round at his home Grand Slam, Roland Garros, cracked the Top 100 in June with his fourth ATP Challenger Tour title and second of the season. Moutet will look to follow in countryman Humbert's footsteps and make his debut in Milan in November 2020.

7. Alejandro Davidovich Fokina, No. 87
The Spaniard became the first player from his country to compete in Milan last month, and Davidovich Fokina endeared himself to thousands of fans with his fearless and aggressive style of play. The 20-year-old, like Shapovalov, ended the season with his best tennis yet, winning two ATP Challenger Tour titles and cracking the Top 100 of the ATP Rankings.

8. Alexei Popyrin, No. 97
The big-hitting Aussie will look for more consistency in 2020 after showing flashes of excellence in 2019. Popyrin, who was one spot away from competing at the 2019 Next Gen ATP Finals, also reached the third round at his home Grand Slam, the Australian Open, and made the quarter-finals in Atlanta. He'll look for more deep runs in 2020.

9. Emil Ruusuvuori, No. 123
The rising Finn sits at a career-high No. 124 in the ATP Rankings after lighting up the ATP Challenger Tour in the second half of the season. Ruusuvuori won four titles and produced a 20-3 record in his past six events. With only 50 ATP Rankings points to defend until June, Ruusuvuori is poised to make a run for the Top 100 next season.

That feeling when you win the title in your hometown. 😊🙌@EmilRuusuvuori is the champion at the inaugural Tali Open in Helsinki. The FOURTH title of the year for the 🇫🇮. pic.twitter.com/0FlChPK4IK

10. Rudolf Molleker, No. 164
Molleker continued his rise in 2019 by scoring tour-level wins on home soil in Munich and Hamburg, in addition to qualifying for the Australian Open and Roland Garros. The precocious 19-year-old picked up his first Top 50 win after upsetting Hubert Hurkacz en route to a runner-up showing in June at the ATP Challenger Tour event in Poznan.

11. Thiago Seyboth Wild, No. 211
The Brazilian turned his attention to the pros after clinching the 2018 US Open boys’ singles title. Seyboth Wild proved to be a quick learner by picking up his first tour-level win this February in at the Brasil Open. He finished the year on a high note with his first ATP Challenger Tour title in Guayquil.

12. Nicola Kuhn, No. 214
Two years after grabbing a pair of ATP Challenger Tour titles as a 17-year-old, Kuhn made it a hat trick this August by prevailing on home soil in Segovia. The Spaniard also scored a tour-level win this April in Barcelona.

13. Sebastian Korda, No. 249
Korda doesn’t need to look far for advice on pursuing his dream of reaching the top of the sport. His coach is his father, 1998 Australian Open champion Petr Korda.

The 19-year-old American reached his first two ATP Challenger Tour finals this year in Nur-Saltan and Champaign, cutting his ATP Ranking by more than half throughout the year to reach a current career-high of No. 249.

It was a breakout week for @SebiKorda in Nur-Sultan, as the 19-year-old 🇺🇸 appeared in his first #ATPChallenger final.

Just the sixth teenager to reach a final this year. pic.twitter.com/yf9GNg2wqY

14. Hugo Gaston, No. 252
The French teenager competed primarily in ITF Futures events this year, winning four titles and finishing runner-up in four other tournaments. Gaston proved he’s ready to make the jump to bigger events next year after defeating World No. 51 Juan Ignacio Londero in the qualifying draw of the Rolex Paris Masters.