Carlos Alcaraz is among the first four players to qualify for the Intesa Sanpaolo Next Gen ATP Finals in Milan after his historic run to the US Open quarter-finals last week. The 18-year-old Spaniard has qualified for the innovative 21-and-under tournament, to be played 9-13 November, along with Jannik Sinner, Felix Auger-Aliassime and Sebastian Korda.

Alcaraz became the youngest US Open quarter-finalist in the Open Era after an inspired run that included a third-round upset of third seed Stefanos Tsitsipas, who triumphed in Milan in 2018.

The protégé of former World No. 1 Juan Carlos Ferrero, Alcaraz will compete in Milan for the first time. Coming into the 2021 season, he had just one tour-level win. But he is 22-14 on the season, including his big result in New York, his first ATP Tour title in Umag and semi-final runs at ATP 250 events in Marbella and Winston-Salem. 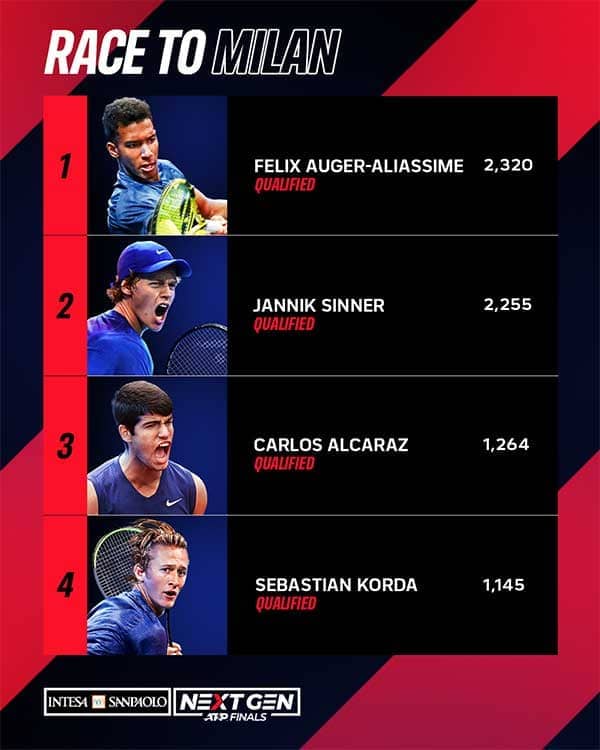 Sinner was just inside the world’s Top 100 when he won the 2019 Intesa Sanpaolo Next Gen ATP Finals as the eighth seed. Now the Italian is firmly inside the Top 20 and this year he lifted an ATP 250 trophy in Melbourne and earned ATP 500 honours in Washington.

Auger-Aliassime, who first qualified for Milan in 2019, just achieved the best major result of his career at the US Open, where he reached the semi-finals. The Canadian also made the Wimbledon quarter-finals and advanced to ATP 250 finals in Melbourne and Stuttgart this year.

American Korda has booked his place in Milan for the first time. The 21-year-old is 23-13 on the year. Korda began the season on a high by reaching his first ATP Tour final in Delray Beach and he has not looked back.

The son of former tennis professionals Petr Korda and Regina Rajchrtova and sibling of LPGA stars Jessica Korda and Nelly Korda, the Florida resident claimed his maiden tour-level title in Parma, reached the quarter-finals at the ATP Masters 1000 event in Miami and advanced to the second week at a major for the first time at Wimbledon.