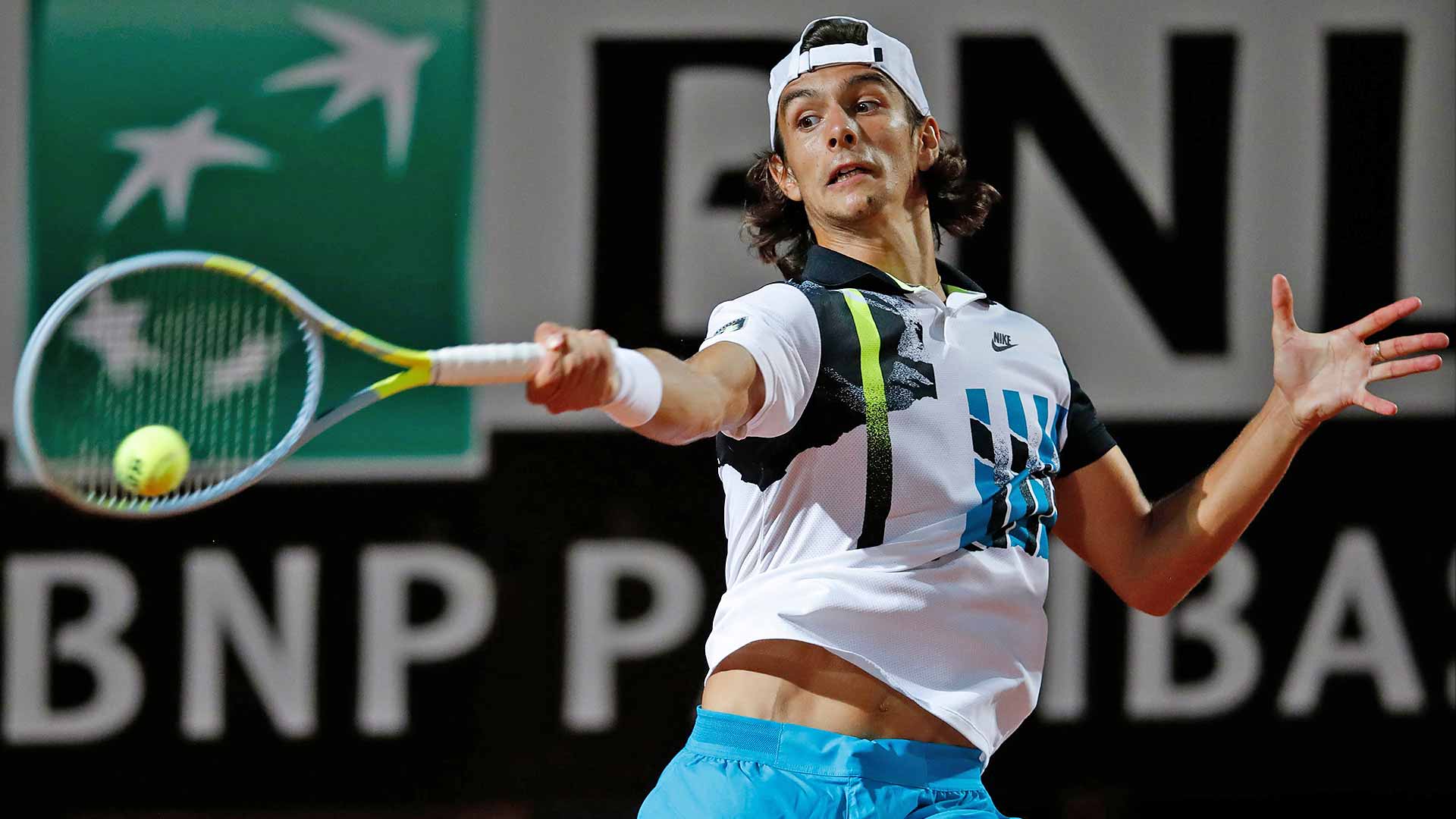 Lorenzo Musetti is one of four Italians into the round of 16 in Rome. © Clive Brunskill/Getty Images

Lorenzo Musetti proved that his first-round victory over Stan Wawrinka was no fluke on Thursday night as he continued his giant-killing run at the Internazionali BNL d’Italia.

The 18-year-old qualifier showed no fear in dispatching former World No. 4 Kei Nishikori 6-3, 6-4 at the Foro Italico for a clash against Dominik Koepfer, who beat fifth seed Gael Monfils 6-2, 6-4. Musetti is the first Italian teenager to reach the last 16 in Rome since 19-year-old Diego Nargiso in 1989.

“It was an incredible match,” said Musetti, in an on-court interview. “I think I played really smart, as he was playing close to the baseline. It was different to Wawrinka, they are great champions. I am really happy right now. I felt really good on my forehand from the beginning. I could play more offensively on return, than against Stan.”

ITALIANS IN ROME LAST 16
An Open Era-tying record four Italians are in the Rome Round of 16, the first time since 1979 when Corrado Barazzutti, Paolo Bertolucci, Gianni Ocleppo and Adriano Panatta accomplished the feat. That year Ocleppo and Panatta reached the quarter-finals.

An Italian teenager has never reached the Rome quarter-finals. The youngest Italian to reach the quarter-finals was 20-year-old Andrea Gaudenzi, now the current ATP Chairman, who lost to Pete Sampras in the last eight in 1994.

"I always used to be warrior, a fighter, but I had a lot of ups and downs during the past year," said Musetti. "This month, I tried to be calm and stay positive on court, and I think it's my best improvement in the past few weeks. Here in Rome, I'm feeling really well. Even today, I think I won mentally, because I played well on the tough points. I think the key was this, the important points."

Musetti, currently No. 249 in the FedEx ATP Rankings, saved three break points at 1-1 in the first set, then showcased easy power off both wings to break Nishikori in the third game. Musetti’s weight of shot kept Nishikori behind the baseline and he clinched the 43-minute opener with a smash winner — his 11th winner of the set.

Nishikori, who earned his first victory since 28 August 2019 over Albert Ramos-Vinolas on Monday, drew on years of experience to save two break points at 2-3, and while the Japanese star was unable to convert two break points in the next game, he was left to rue missing a volley when Musetti served at 3-4, 0/30.

At 4-4, with Nishikori serving at 30/15, the floodlights went off on Court Centrale and play resumed after a 12-minute delay. Musetti won three of the next four points to break for his second ATP Tour win, then calmly recovered from 0/30 when serving for the match.

“He's a good player, I think, especially on clay,” said Nishikori. “I don't know how he's going to play on hard [courts], but for sure he's going to have a lot of power on clay. [He's got a] good backhand, too. [A] good serve. He can come in well. He can do pretty much everything. That's, I think, a big weapon for him.”

After saving a match point to defeat Alex de Minaur in the first round, Koepfer earned the biggest victory of his career to book a third-round metting against Musetti.