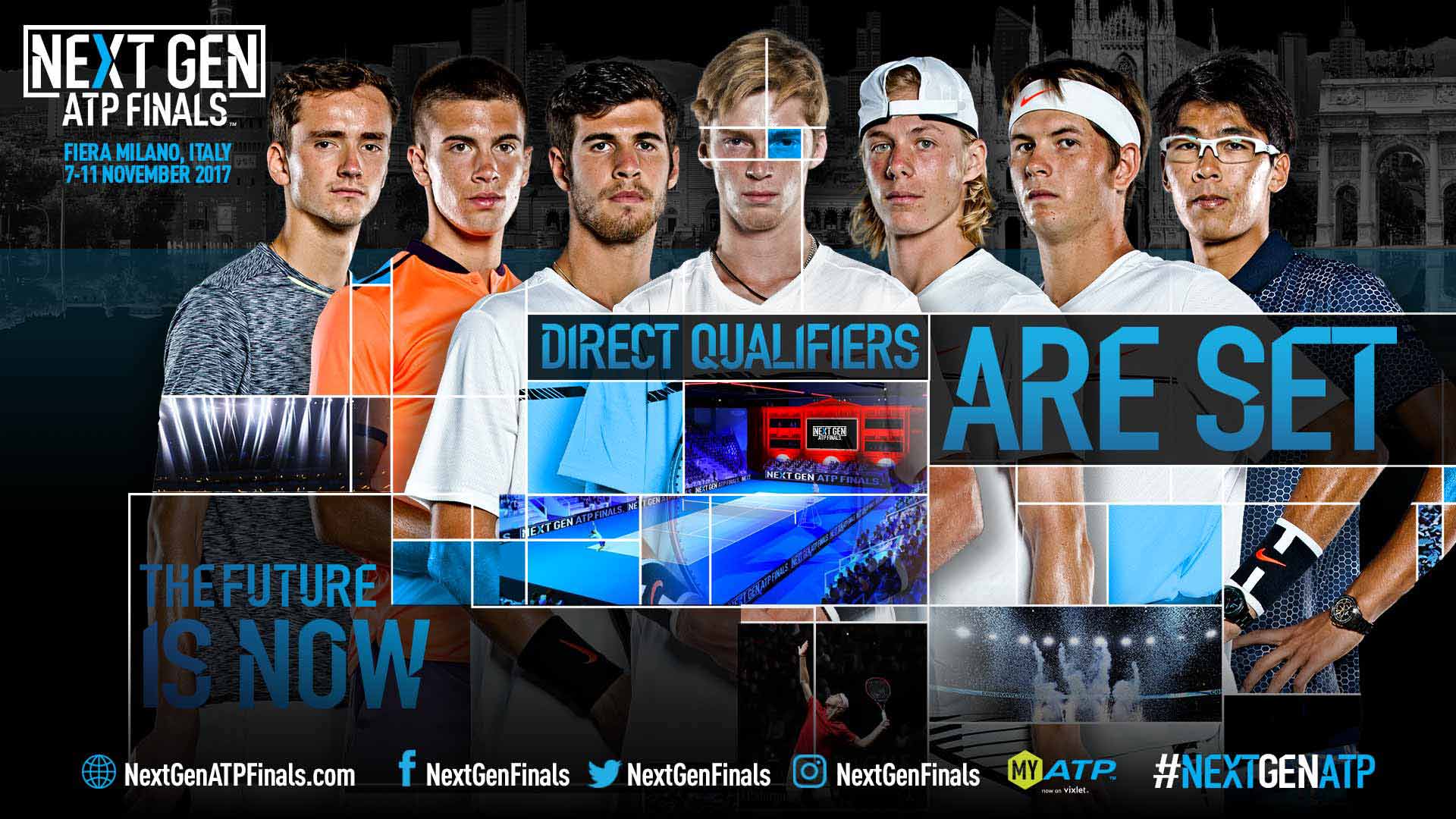 South Korean Hyeon Chung and Russian Daniil Medvedev on Wednesday became the latest players to qualify for the inaugural Next Gen ATP Finals, the eight-player tournament, to be held 7-11 November in Milan at the Fiera Milano, following the withdrawal of Alexander Zverev of Germany. The final remaining spot will be awarded to the winner of an Italian qualifying event, consisting of the best 21-and-under Italian players, which finishes on 5 November.

Chung and Medvedev will join Russians Andrey Rublev and Karen Khachanov, Canadian Denis Shapovalov, American Jared Donaldson and Croatian Borna Coric at the innovative new event that will feature a series of rule changes. All seven players have featured this year in the Top 50 of the Emirates ATP Rankings.

World No. 5 Zverev announced that he would withdraw from the tournament to focus his energies on the Nitto ATP Finals, which begins just one day after the Next Gen ATP Finals concludes. The 20-year-old German is the youngest player in 10 years to qualify for the prestigious season finale, to be held 12-19 November at The O2 in London.

"I have consulted with my team and in order to best prepare for London, we have made the decision that it is best not to play the week before in Milan," said Zverev. "Therefore, sadly, I will be withdrawing from the Next Gen ATP Finals, however I still plan on making an appearance at the beginning of the event to support the tournament and show my appreciation for my fans in Italy that were so supportive during my win in Rome earlier this year."

Rublev, who qualified for Milan last week, has enjoyed a breakout season on the ATP World Tour. The 20-year-old Moscow native exploded onto the scene in July, when, as a lucky loser, he won five consecutive matches to win his maiden ATP World Tour title at the Plava Laguna Croatia Open Umag. He currently sits at a career-high No. 35 in the Emirates ATP Rankings.

"I'm really happy and I'm really excited to play in Milan," said Rublev. "I worked hard this year and I've had some great results."

His countryman Khachanov celebrated his first ATP World Tour title a year ago at the Chengdu Open and has followed that memorable finish with deep runs all season. The 6' 6” right-hander has reached four ATP World Tour quarter-finals. He also advanced to the semi-finals of the Gerry Weber Open in Halle (l. to Federer).

Canada's Shapovalov has spent the past few months shattering his goals for the year. The 18-year-old left-hander sprinted through the Coupe Rogers draw in Montreal in August, beating Juan Martin del Potro and Rafael Nadal before falling in the ATP World Tour Masters 1000 semi-finals to Zverev. Weeks later, Shapovalov, playing at his first US Open, advanced past then-World No. 12 Jo-Wilfried Tsonga and reached the fourth round in New York.

"Only eight guys get the privilege to play such a prestigious event. So I’m going to enjoy myself and try to do the best I can,” said Shapovalov.

Donaldson of the U.S. has put together one of the most consistent seasons of any #NextGenATP player. The American made the fourth round at the Miami Open presented by Itau and later advanced to the third round at the Citi Open in Washington, D.C., and at the Coupe Rogers in Montreal. His best finishes, however, have come during the past two months, with quarter-final runs at the Western & Southern Open in Cincinnati and at the Chengdu Open in China.

Coric has celebrated some of his biggest wins during the 2017 season, his third on tour. The Croatian captured his maiden ATP World Tour title in April at the Grand Prix Hassan II in Marrakech, saving five championship points against German Philipp Kohlschreiber. At the Mutua Madrid Open, the Zagreb native picked up the biggest win of his career by knocking off then-World No. 1 Andy Murray.

South Korea's Chung reached a career-high of No. 44 in the Emirates ATP Rankings in September, a few weeks after making his third quarter-final of the season at the Winston-Salem Open. Chung also advanced to the quarter-finals of the Barcelona Open Banc Sabadell (l. to Nadal), an ATP World Tour 500 event, and his first ATP World Tour semi-final at the BMW Open by FWU in Munich (l. to Pella).

Medvedev rounded out the direct qualification field and made it a trio of Russians to qualify for Milan. The Moscow native burst out of the gates to start the year, reaching the final of the Aircel Chennai Open (l. to Bautista Agut). Medvedev has made steady progress throughout the year as well, advancing to six ATP World Tour quarter-finals and a semi-final at the Aegon International in Eastbourne.