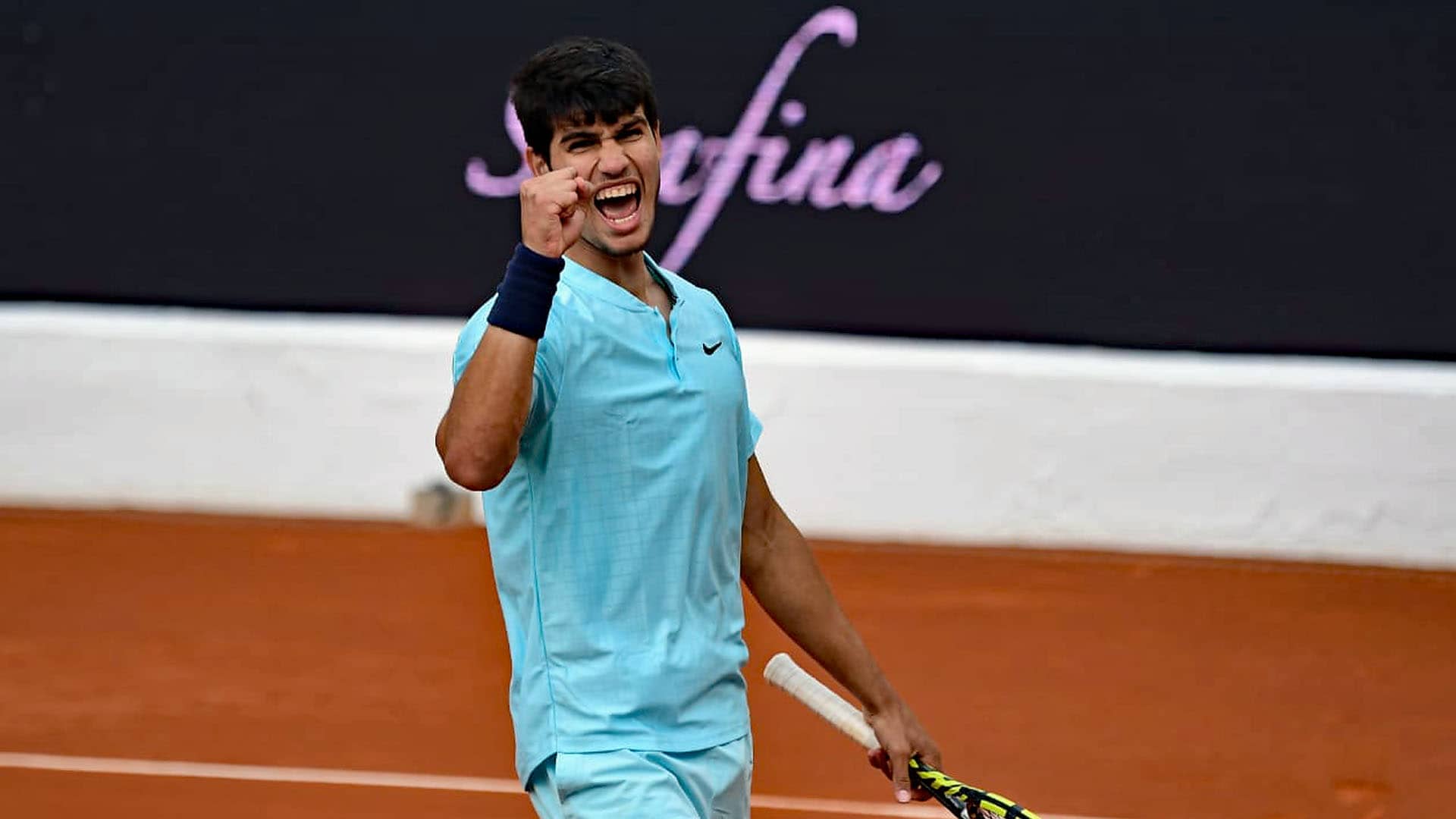 Carlos Alcaraz, 17, rallied from a set down against Feliciano Lopez to reach his first ATP Tour quarter-final in Marbella. © Alvaro Diaz/AnyTech365 Andalucia Open

#NextGenATP Spaniard Carlos Alcaraz reached another major milestone with his victory over sixth seed Feliciano Lopez at the AnyTech365 Andalucia Open on Thursday. The 17-year-old booked his spot into the first Tour-level quarter-final of his career after rallying back against 39-year-old Lopez 4-6, 6-2, 6-4.

Alcaraz looked undaunted by the occasion when he stepped out onto Estadio Manolo Santana against seven-time titlist Lopez. His opponent turned pro in 1997, six years before Alcaraz was born in 2003, and had amassed almost 500 wins in his career.

“It was a difficult match, Feli is a great player with a great serve and great volley,” Alcaraz said. “I started the match very well with a break in the first few games, but I got a little bit lost toward the end of the first set. Feli took advantage of that, and of course he used his experience in those moments.

“The key was that I stayed calm after losing the first set. I came out in the second set very focussed and knowing what I had to improve.”

The 17-year-old, who is contesting his sixth Tour-level main draw, needed just over two hours to defeat his fellow Spaniard. Lopez’s experience was on display as he took the opening set from a break down, but Alcaraz honed in on the sixth seed’s vulnerable second serve. He was rewarded with 10 break opportunities across three sets, converting on five occasions.

Coached by Juan Carlos Ferrero, the young Spaniard has been checking off many ‘firsts’ this season after ending 2020 as the youngest player in the Top 600. After successfully navigating his first Australian Open appearance and first Grand Slam main draw win to start the season, Alcaraz continued his momentum in Marbella.

Alcaraz will next face third seed Casper Ruud, who booked his own quarter-final spot after a 6-3, 6-2 victory over Gianluca Mager.

“Casper Ruud is a great player and he’s No. 26 in the [FedEx] ATP Rankings,” Alcaraz said. “I saw [some of] his matches. I know he has a good serve and a good forehand. I will have to be focussed on his forehand and try to play aggressive. Let’s see what happens in the match.”

Earlier in the day, Jaume Munar claimed his first Top 20 victory of the year in style, dropping just three games against second seed Fabio Fognini to reach the quarter-finals.

Munar looked right at home for an hour and 24 minutes on Estadio Manolo Santana, where he reached the final here in Marbella at the ATP Challenger Tour event last week. The Spaniard broke Fognini's serve on six occasions from 16 break opportunities on his way to a 6-2, 6-1 victory.

The No.95 player in the FedEx ATP Rankings arrived in Spain after a strong run in South America. He reached the quarter-finals at the Argentina Open in Buenos Aires from qualifying, and backed it up with a final in doubles at the Chile Dove Men+Care Open in Santiago (w/ Delbonis).

By contrast, his opponent Fognini was contesting his first clay court match of the year in Marbella ahead of his Rolex Monte-Carlo Masters title defense. It took a few games for Fognini to find his range in the opening set, but by then he was already down a double break and trailing 5-1. The Italian was unable to recover, and won only one more game as Munar stormed through the second set.

Munar will take on Ilya Ivashka in the quarter-finals, after the Belarusian scored an upset of his own over fifth seed Alejandro Davidovich Fokina, 6-1, 6-3. Ivashka, No. 115 in the FedEx ATP Rankings, fired six aces and saved all nine break points he faced to take down the Spaniard and reach his first ATP Tour quarter-final of the year.

Did You Know?
Today's match between Feliciano Lopez (39) and Carlos Alcaraz (17) features the biggest age difference between two players in an ATP Tour main draw since 2011 Vienna, when Dominic Thiem (18) defeated Thomas Muster (44).