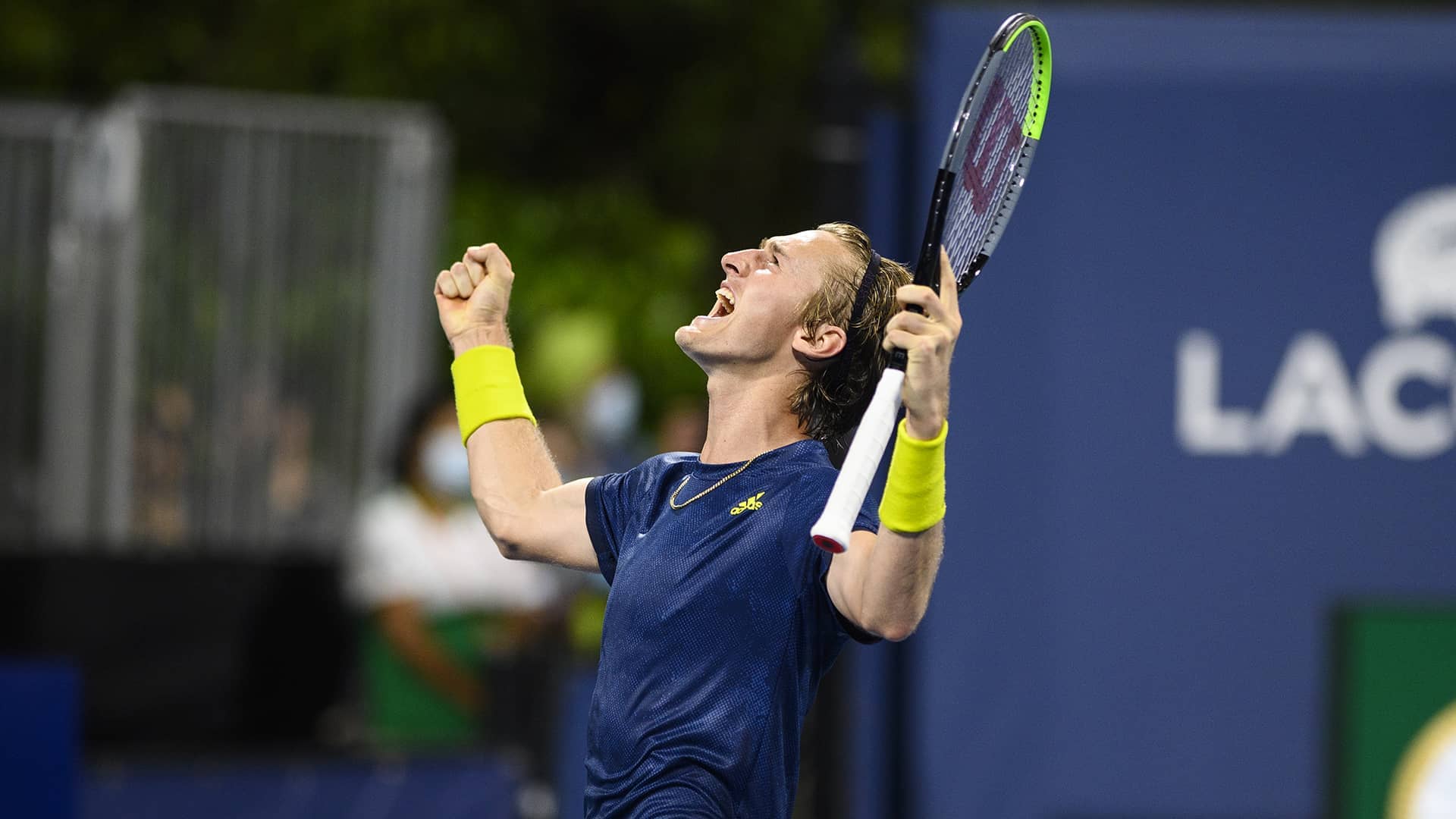 Sebastian Korda closes out the biggest win of his career over fifth seed Diego Schwartzman in the Round of 16 in Miami. © Mike Lawrence/ATP Tour

Sebastian Korda is through to his maiden ATP Masters 1000 quarter-final, following a three-set upset of fifth seed Diego Schwartzman at the Miami Open presented by Itau on Tuesday. The 6-3, 4-6, 7-5 result was the #NextGenATP American’s first Top 10 victory.

One of four Americans to have started the day, it was the youngest, 20-year-old Korda, who was the last man standing. It will be Korda’s second ATP Tour quarter-final and second in his home state of Florida, having reached the Delray Beach Open final in February.

"He made it tough. In that first set I served super hot, but he didn't serve that well," Korda said. "But then he picked it up and he was just fighting and he was playing some really good tennis after that, and then the third set was just a battle.

"I played an incredible match today. I think mentally I was great out there. I stayed calm. Even when in the tight situations I believed in myself and I went for it. I'm super proud of that. Yeah, just a lot of joy inside. All the hard work that I have done with my team is paying off."

Schwartzman was looking to reach the quarter-finals in Miami for the first time, in what would have been his sixth at ATP Masters 1000 level. The Argentine dug in to save a set point on serve to hold for 3-5, but was left shaking his head in disbelief as Korda painted the line with his 15th winner of the set in the ensuing game.

The 20-year-old clinched the set at the 38-minute mark and it prompted an immediate lift in aggression from Schwartzman in the second set. The fifth seed pounced to break for 3-1, but the advantage was short-lived as Korda broke back three games later.

Schwartzman raised his level when it mattered as the American hit back-to-back forehand winners to concede serve and send the match into a deciding set. It was the World No. 9, however, who blinked first in the third.

A sloppy game gifted Korda the early break and the American carried the advantage to serve for a place in the quarter-finals at 5-4.The first sign of nerves crept in as a match point went begging and Korda was broken, however, he responded with another break and served it out on his 21st forehand winner after two hours and 36 minutes.

"My parents are super big on just baby steps," he said. "You can play tennis for so long if you stay healthy for 15-plus years. Especially guys now they are playing until 40, it's incredible. There is a lot of years ahead of me. Any win is a good win. I'll always put my head down and keep working, and hopefully one day I could achieve something that my dad achieved."

Korda awaits the winner of fourth seed Andrey Rublev and former World No. 3 Marin Cilic. He equals his dad Petr Korda’s run to the Miami quarter-finals in 1994 and 1996 and stands one win from equalling his best result, a semi-final defeat to Pete Sampras in 1993.

"Yeah it's super special, both my parents are here," he said. "They're supposed to fly today to Palm Springs to watch my two sisters [play golf]. They have their first major of the year in Palm Springs so hopefully they can keep staying here and keep going."