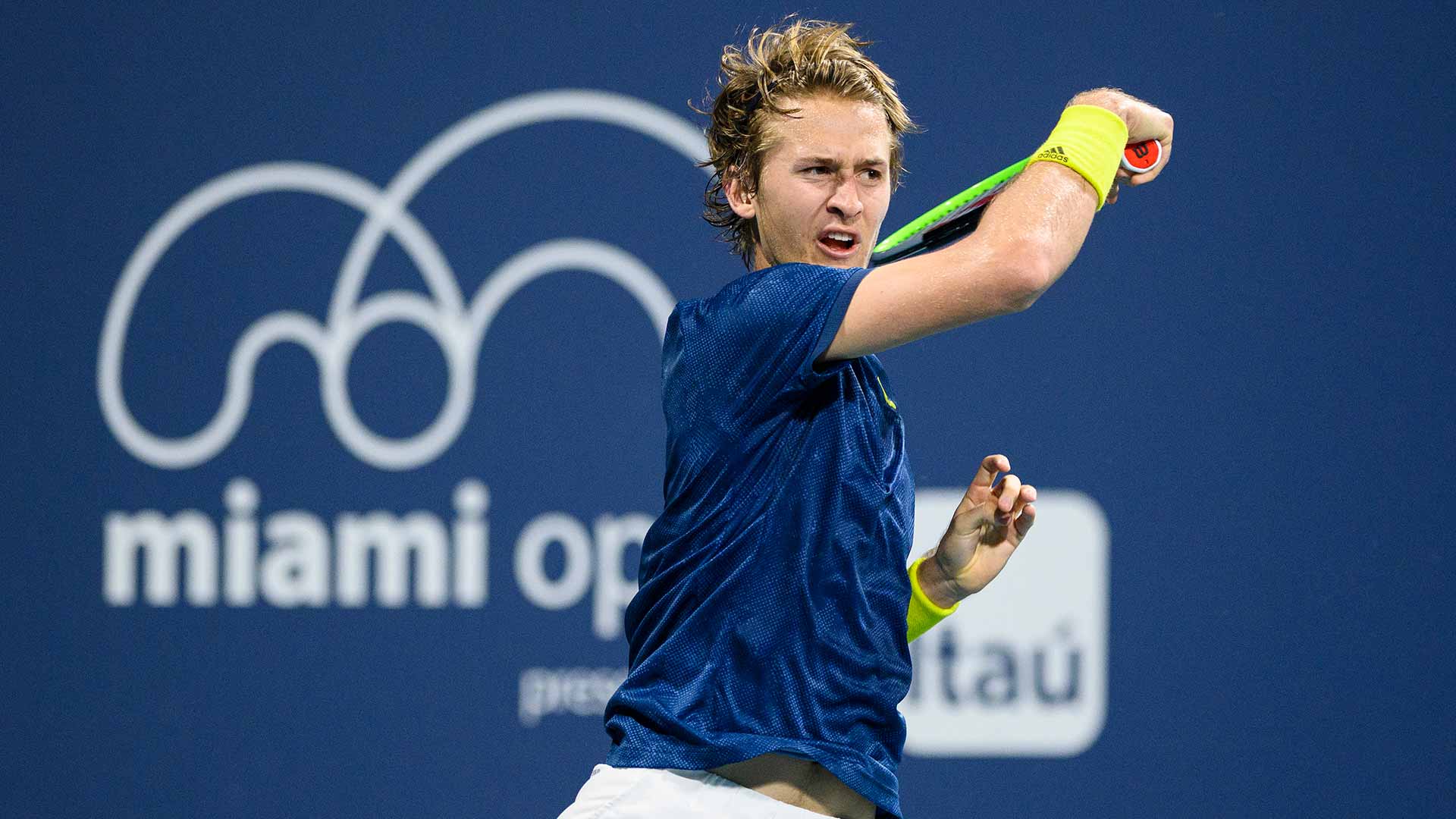 Sebastian Korda rallied from a set down against 10th seed Fabio Fognini at the Miami Open presented by Itau. © Mike Lawrence/ATP Tour

The 20-year-old struggled to get on the scoreboard in the opening set against Fognini. But he never panicked, and raised his level in the second and third sets to claim his biggest career win over the No. 17-ranked Italian.

Korda was not able to hold serve set as Fognini flew out of the gates firing winners off both wings in the first set. The American struggled to read the variety in Fognini’s game, and the Italian had all the answers to break his serve four times.

But he stayed patient, and was ready to captalise when the inevitable drop in form came in the second set. Korda played more aggressively, and only dropped four points on serve throughout the set to keep Fognini contained.

After taking an early lead in the third set, Korda was tested again as the Italian powered to four break points at 3-2. But the American responded emphatically, saving all four and sealing the hold with an ace. He broke to love in the next game to make it 5-2, and closed out the victory after an hour and 48 minutes.

Into the third round, Korda will next face fellow Miami debutant Aslan Karatsev, the No. 17 seed. Karatsev defeated Mikhail Kukushkin 6-4, 6-3 earlier in the day to advance.

Contesting his first main draw match at an ATP Masters 1000 event, Karatsev broke serve four times and turned around an early deficit to win in an hour and 20 minutes.

“It was a really tough, tight match. To play your first match against Kukushkin is not easy, he’s a tough opponent,” Karatsev said in an on-court interview. “The courts are more slow here compared to last week in Dubai, so you have to adjust. The first match is always tough, but I found a way to beat him.”

Karatsev ended last season at No. 112 in the FedEx ATP Rankings, but he’s burst into the Top 30 after a stunning first three months of 2021. The Russian turned heads when he reached the semi-finals at the Australian Open as a qualifier, and backed it up by winning his first ATP Tour title at the Dubai Duty Free Tennis Championships.

Karatsev owns a 13-2 record on the season, with his only two losses so far coming at the hands of  Top 4 opponents Novak Djokovic and Dominic Thiem.

Elsewhere in the Korda and Karatsev section, fifth seed Diego Schwartzman converted his fifth match point to put away Japan’s Yasutaka Uchiyama 6-3, 6-3. The Argentina Open champion needed an hour and 22 minutes to book a third-round clash with No. 25 seed Adrian Mannarino, who defeated Miomir Kecmanovic 6-3, 6-4 to advance.

The World No. 9 saved three of the four break points he faced against Uchiyama. He will take a 1-0 ATP Head2Head series lead into his clash against Mannarino. That win came on clay at the 2018 Mutua Madrid Open.