Jannik Sinner: From Focussing On Skiing To #NextGenATP Sensation 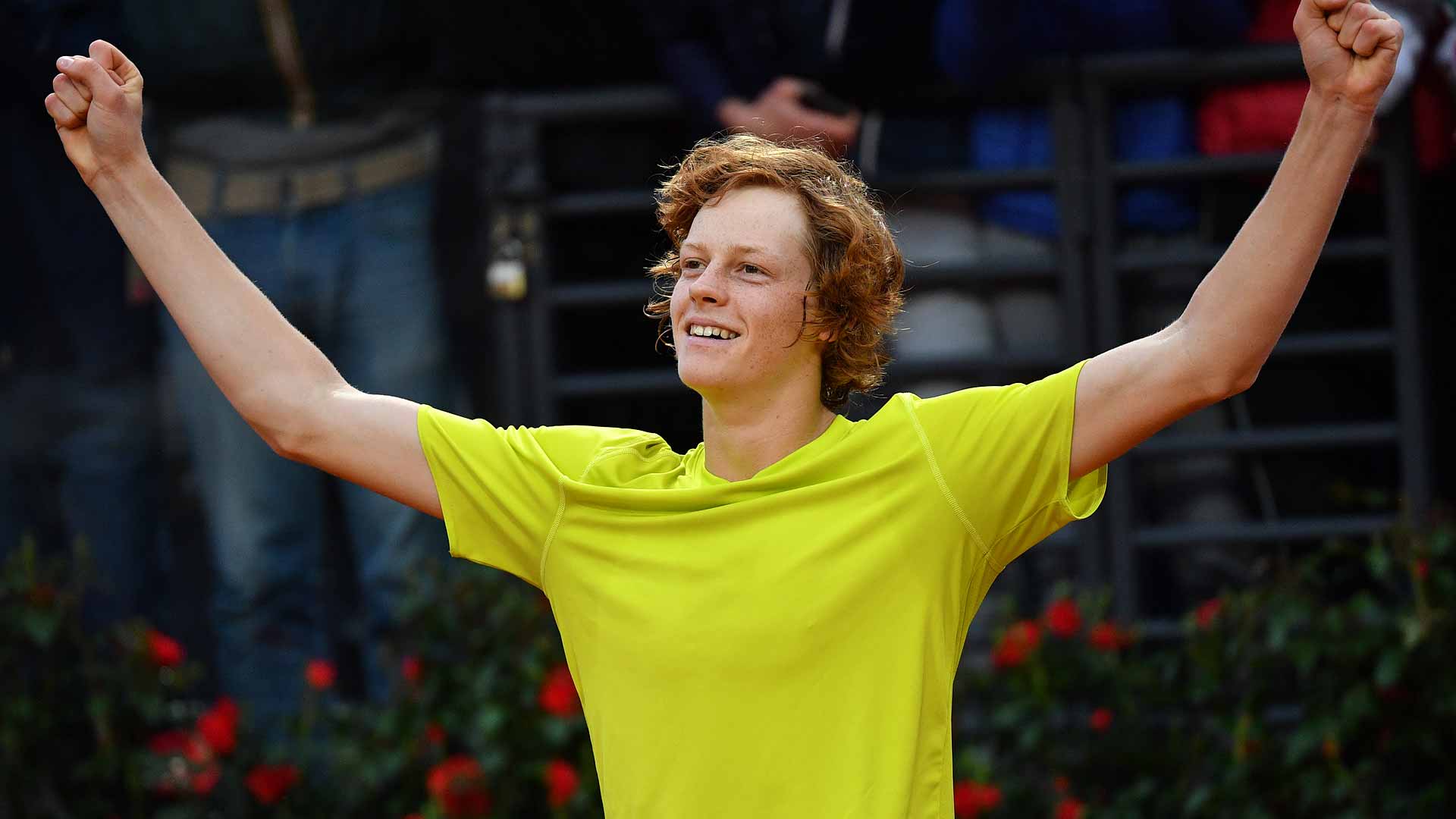 #NextGenATP Italian Jannik Sinner is competing in the main draw of a Grand Slam for the first time at the US Open, where he qualified. © Peter Staples/ATP Tour

Editor's note: This story was originally published on 25 August 2019. Jannik Sinner will compete at the 2019 Next Gen ATP Finals as the tournament's wild card.

There currently is no player 18 or younger inside the Top 100 of the ATP Rankings. But the youngest player in the Top 300, 18-year-old #NextGenATP Italian sensation Jannik Sinner, who qualified for his first Grand Slam main draw at the US Open on Friday, is on the way, and quickly.

What’s incredible is that less than five years ago, tennis was not the Italian’s focus; it was skiing. Up until that point, Sinner had played just two days per week. When he was seven, he did not touch a racquet for a year, instead playing football along with his skiing.

“When I went on court just two times in a week, I really enjoyed it. I just tried to enjoy and it was fun. It was just fun,” Sinner said. “But now it’s a little bit more than fun. Now it’s fun, but you want to go a little bit further and I think that makes this very important.”

At the age of 13, Sinner moved to the academy of renowned coach Riccardo Piatti, who has worked with Ivan Ljubicic, Novak Djokovic and Richard Gasquet among others. Currently, his star pupil is Borna Coric, whom Sinner has accompanied when he was not playing in recent weeks. At the time, Sinner was still skiing, but once Piatti showed interest in him, tennis became the priority.

“I always watched Roger and Rafa and Novak and the big stars. I remember when I came to Riccardo and he saw me, in that moment I felt like, ‘Okay, he’s seeing a very good player.’ I think that helped me to focus more [on] tennis,” Sinner said. “One time I didn’t want to go skiing and that was then the only sport I was focussing about: tennis.”

Sinner did not play many of the big ITF Junior events you may expect of a budding star. He did not compete at any of the Grand Slams, reaching a career-high No. 133 as a junior. He has already surpassed that in the ATP Rankings, climbing to No. 130 on 12 August, when he was still 17.

Sinner elected to compete at Futures events and slowly move his way up to the ATP Challenger Tour rather than dominating the juniors.

“I think one reason [I focused on the pros] is because I’m here now at 18 years and I can play in the main draw of the US Open. I always was searching for the players who played better than me,” Sinner said. “I was trying to play a higher level than I was.”

This was Sinner’s decision. Some coaches would push back on their players, but the Italian’s did not.

“I think the disadvantages if you’re starting to go on a higher level and you don’t have the level, I think it’s better to stay in juniors,” Sinner said. “But I think my team always saw me that I have this level to compete, so they let me do what I wanted.”

If there’s one thing you should know about Sinner, it’s that he’s entirely focussed on the present, but yet he’s not at the same time. The players he trains with laud his focus during practice as well as his work ethic. With that said, Sinner also constantly thinks of the bigger picture and how he can become the best player he could be down the road rather than just to win a match in the moment.

“I want to be the best player not only in Italy, but maybe once I can say that I’m the best player in the world,” Sinner said. “It takes time. But honestly I’m not thinking about this.”

Sinner could have stayed in Europe in the past couple of months. But he has been in the United States since the end of July to compete on hard courts at ATP Challenger Tour events, leaving the support of local crowds behind him for a challenge that his team felt would pay off in the long run.

"We decided to go [to] America to improve our game on hard courts and don’t think about [my ATP] Ranking," Sinner said. "If you’re going to be on top, you will play Montreal, Cincinnati. So we just were pushing to play in the same continent where the big tournaments are."

As recently as the week of 5 February 2018, Sinner had no ATP Ranking. The week of US Open qualifying last season, he was World No. 1,115. But since, he has rapidly ascended, winning his first two ATP Challenger Tour titles.

The teen is the 11th player to claim multiple trophies at that level before turning 18. That has helped him climb into the Top 150, with no signs of him slowing down.

“Our goal is not to focus on the [ATP] Ranking, so maybe that helped me [so] that I am in the position where I am,” Sinner said. “It went very fast, coming last year to this year out of the Top 1,000 and now I am in the Top 150. To realise it, it’s not so easy. But I feel comfortable.”

Paolo Lorenzi, a 37-year-old who got into the main draw of the US Open as a lucky loser, enjoys practising with young Italians because of their enthusiasm and to see which good young players from his country are on the rise. And he has gotten to know Sinner fairly well, hitting with him several times in the past week at Flushing Meadows.

“I think he’s playing really, really good. I already practised a lot with him last year at the Challengers,” Lorenzi said. “First of all, he’s a great guy. And I think this is the most important thing.

“He’s really young so I think he’s improving everything. He has a great attitude on court. He improved a lot his forehand and backhand and I also think he’s moving better in the past six months. I think that he’s improving a lot because he’s working good on court. He’s always focussed on what he has to do.”

Andreas Seppi, another Italian, is from a town less than an hour’s drive away from where Sinner grew up, so he has known the rising star from a young age. Seppi’s friend from his own junior days brought Sinner to his attention when he was only 12. And for him, there’s a reason why the #NextGenATP player has been able to compete against tour-level pros this soon, having won his first ATP Tour match (in Budapest) and maiden ATP Masters 1000 victory (against Steve Johnson in Rome) this year.

“He’s always been very calm on court and I think that’s a good mentality. He doesn’t show a lot of emotions also, similar to myself I would say. That’s kind of nice to see. But also I think his gamestyle is very aggressive,” Seppi said. “He tries to play very fast, to dictate the game. His matches I saw this year, he was always the player who tried to dictate the point or the game. If he was losing, he was always [pushing] on the power, trying to be on the opponent. His gamestyle, if he keeps it like that, he’s going to be very difficult to play against. He plays very close to the line and very fast, doesn’t give you a lot of time. I think it’s a good advantage for him already.”

Sinner will face a stern test in the first round Monday evening against former World No. 3 Stan Wawrinka. The level of his opponent doesn’t matter to him, though. He has no fear. Before the draw came out, he didn’t mind if he drew five-time champion Roger Federer.

“For me it doesn’t matter because I just want to focus about me. If I play Roger, it’d be very great because I’m here for making experience and I think this match against Roger could help me,” Sinner said. “Maybe even if I lose, I think it can help me in the future to go a little bit faster if I’m going to grow.”

It’s been an exciting year for Italian tennis, with Fabio Fognini becoming the oldest player to crack the Top 10 for the first time since 1973, and Matteo Berrettini breaking into the Top 20. And now, plenty of eyes are on Sinner, especially after qualifying in Flushing Meadows.

“It’s actually what every nation wants to see, a good young player coming up with a really big potential [to be] winning a Slam. He’s still 18, anything can happen,” Seppi said. “But his potential can be really big for a long time, Top 10 and everything.”

Did You Know?
Sinner is currently in 12th place in the ATP Race To Milan. The Top 7 players in the Race automatically qualify for the Next Gen ATP Finals, with an eighth spot going to an Italian wild card.