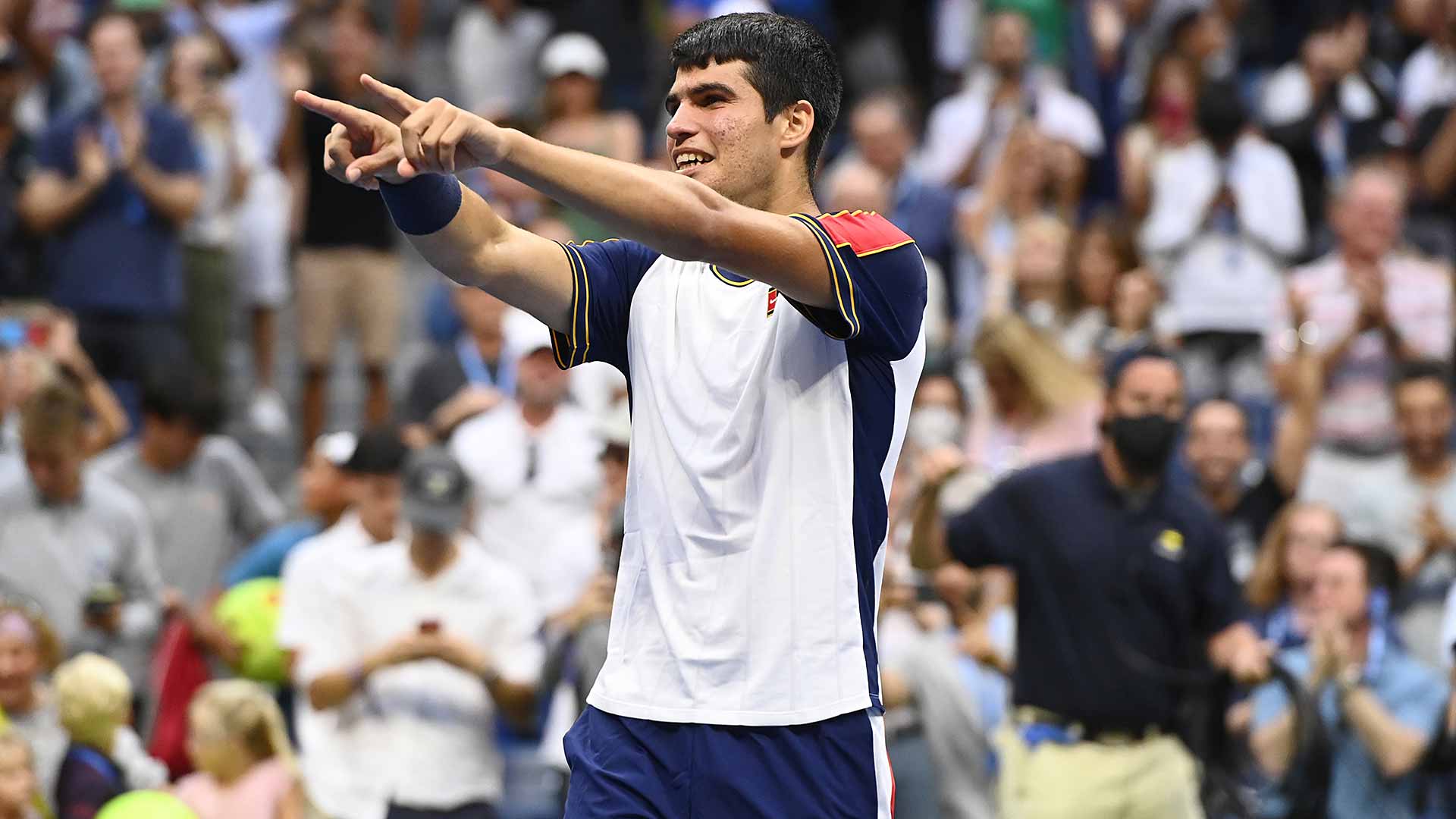 Under the guidance of coach Juan Carlos Ferrero, #NextGenATP Spaniard Carlos Alcaraz defeated Stefanos Tsitsipas on Friday at the US Open to reach the fourth round of a major for the first time. © Garrett Ellwood/USTA

You'll rarely find him without a smile on his face. On court, around the corridors of Flushing Meadows or in the press room. Carlos Alcaraz has plenty of reasons to wear one at the moment, one of them being his performance at the US Open. The 18-year-old Spaniard revealed another after reaching the fourth round of a Grand Slam and defeating a Top 3 player for the first time in his career; his coach, Juan Carlos Ferrero, recommended he do so.

In just nine months, the Murcian has gone from aspiring to enter the Top 100 to "trying to compete head to head against all the best players in the world." A day after Alcaraz's greatest performance to date, the former No. 1 in the FedEx ATP Rankings takes a look back at the achievements of his player's early career in this interview with ATPTour.com.

Arthur Ashe Stadium, Stefanos Tsitsipas on the other side of the net. Victory in the fifth-set tie-break. Were we watching Alcaraz's presentation to the world?
Obviously yes. I think playing on center court at the US Open and against the opponent he had in front of him made Carlos's victory more noticeable. Without a doubt, it was his presentation to the world showing everyone that he has great potential and a great level. He has to continue in that line to try to compete head to head against all the best.

"Juan Carlos always tells me that I have to have a good time on the court. With a smile on my face I play better, and we have proved that”. These were Alcaraz's words, after the match.
I tell him this to try not to be tense in the match and to enjoy what is happening, so he can see things clearly. If he is happy and relaxed, he will see things much better than if he is tense and nervous.

Against Tsitsipas he seemed to follow your advice. He not only enjoyed himself but also demonstrated an ability to play with determination and maturity in critical moments such as the third set or the end of the match.
I think he had been playing very good matches against great opponents like Rafa [Nadal], [Daniil] Medvedev and [Alexander] Zverev, but his level always went down a bit after the second set. Yesterday the goal was to maintain that level, and except in the fourth set with the problems he had with his leg, he was at a good level. It was what we were looking for.

He himself highlighted those three matches that you mentioned against Zverev in Acapulco; Nadal in Madrid; and Medvedev at Wimbledon.
All the matches that he is playing are giving him experience, especially those against the best in the world and in big stadiums. He has to accumulate experiences and having played against Rafa, Zverev and Medvedev surely helped him to approach things in a better way.

What do you tell him before matches like that?
It doesn't change much from what I tell him in other matches: great attitude, fight until the end, try to be himself on court and not be intimidated by where he is playing or against whom. From there, let him fight to the end.

After the match, he looked excited when he hugged Albert Molina [Alcaraz's manager].
Yesterday's match was very emotional. There was a lot of tension throughout the match. I was happy that he had reached the tie-break at the end, but in that situation, it is heads or tails. Obviously, having it so close you always want to win, but the goal was accomplished: to continue growing against an opponent like him. I really enjoyed the match. The end of the match with the victory, even more so.

The kid you started this journey with three years ago has grown up.
He is in a process of maturity and the match against Tsitsipas will surely help him approach everything differently, believing more in himself in the matches that have to come on this kind of court against this type of player.

Now he's facing Peter Gojowczyk in the fourth round.
Now we must continue. I think you have to give it due importance that it has [a victory like this] on the day it happens, but the tournament goes on. This Sunday we have a very tough opponent and once again we have to keep our feet on the ground, do things well and play the tennis he is capable of.