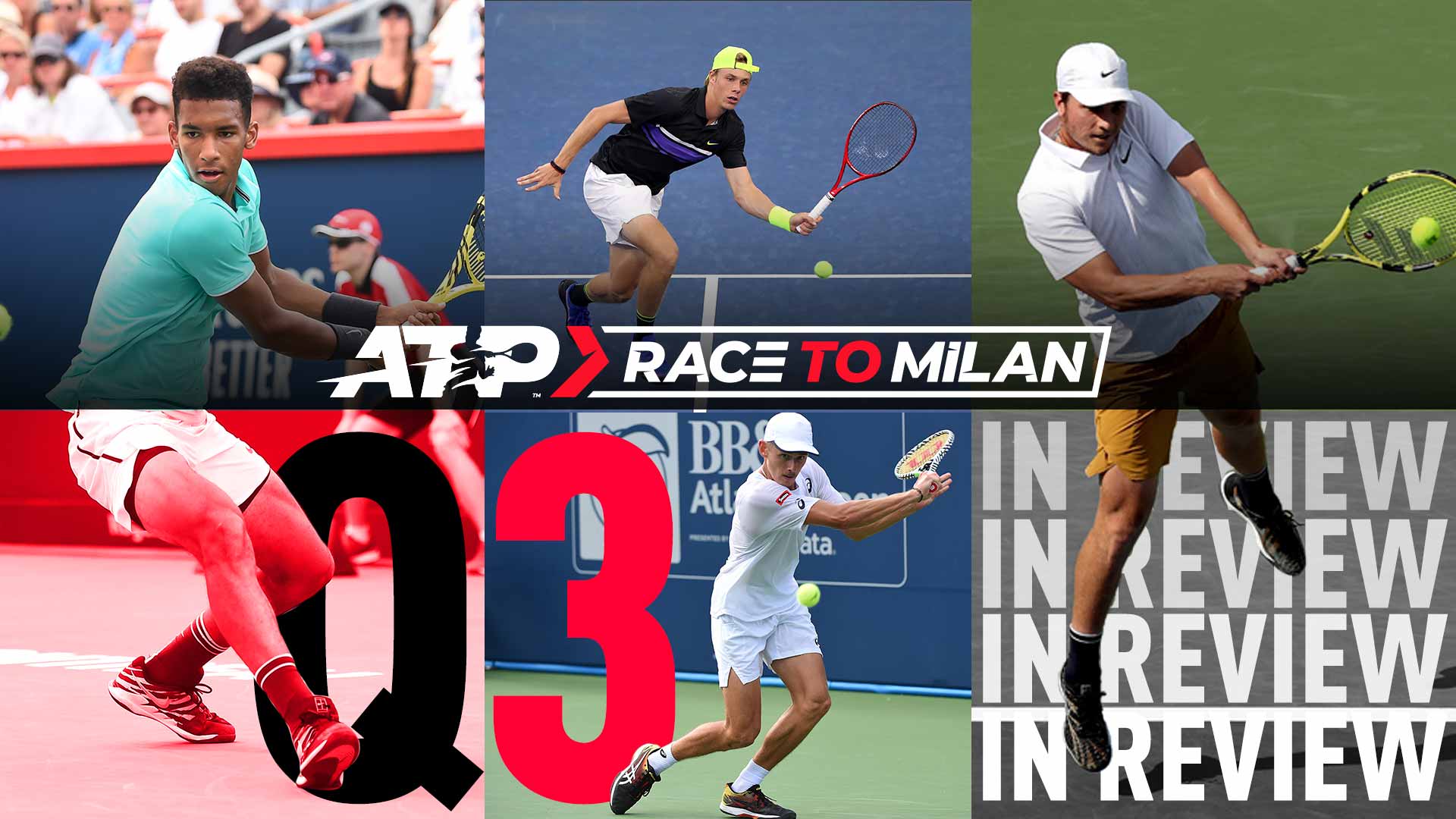 Seven weeks for seven spots. After a thrilling third quarter on the ATP Tour, seven of the eight places at the Next Gen ATP Finals remain up for grabs, and only seven weeks remain in the ATP Race To Milan.

The Race will determine seven of the eight players who compete at the 21-and-under event, now in its third year and to be held 5-9 November in Milan. The eighth spot is reserved for an Italian wild card.

Felix Auger-Aliassime, 19, sits in second place in the Race with 1,636 points. The #NextGenATP Canadian is 31-19 during his first full season on the ATP Tour and enjoyed an emotional homecoming in August at his home ATP Masters 1000 event, the Coupe Rogers in Montreal.

Auger-Aliassime made the third round, falling to 2017 Next Gen ATP Finals qualifier Karen Khachanov of Russia.

“When there's a lot on the line, when you see the finish line, the nerves get to you. That's part of my journey,” Auger-Aliassime, who was trying to reach his second Masters 1000 quarter-final (Miami), said at the time. “It just means that I still have things to improve to win these types of matches and to deal better with these types of moments.”

Auger-Aliassime fell in the first round of the US Open to 20-year-old countryman Denis Shapovalov, who is in fourth place in the Race with 1,075 points. The left-hander, who also competed at the inaugural Next Gen ATP Finals in 2017, turned around his season during the North American hard-court swing.

Shapovalov had lost five consecutive matches before the Canadian Masters 1000 event, but he beat France's Pierre-Hugues Herbert to snap the streak. One week later, at the Winston-Salem Open, Shapovalov made his second semi-final of the season (Miami).

Defending champion Stefanos Tsitsipas became the first player to qualify for Milan during the US Open, but Tsitsipas, who leads the Race with 3,205 points, is also on track to make his debut at the Nitto ATP Finals, to be held the following week at The O2 in London.

The 20-year-old De Minaur started his year by winning his maiden ATP title in Sydney, but a groin injury limited his play on clay and grass.

“This one is really special to me. I felt like I really needed this. To start the year with a bang and then be slowed down by injuries… you expect your level to be right there once you come back, but you have to slowly grind your way back,” De Minaur said in Atlanta.

American Frances Tiafoe, who competed in Milan last year, is in fifth place with 960 points. Norway's Casper Ruud, who's going for his maiden Milan appearance, sits in sixth place with 886 points. And Serbian Miomir Kecmanovic, in the seventh and final qualifying spot (873 points), has distanced himself from the rest of the hopefuls.

On 15 July, Kecmanovic was only 57 points ahead of eighth-placed Ugo Humbert of France. But Kecmanovic added 256 points in the past two months, increasing the distance between himself and Humbert to 185 points.

Kecmanovic, 20-15 on the year, made the quarter-finals in Atlanta and the third round at the Western & Southern Open, a Masters 1000 event in Cincinnati. The #NextGenATP Serbian beat Alexander Zverev in Cincy for his first Top 10 win.

“I'm really happy that I was able to play the way I did. I worked a lot, I practised a lot. To see everything come together and happen, it's really special,” Kecmanovic said. “I definitely just tried to go for everything.”