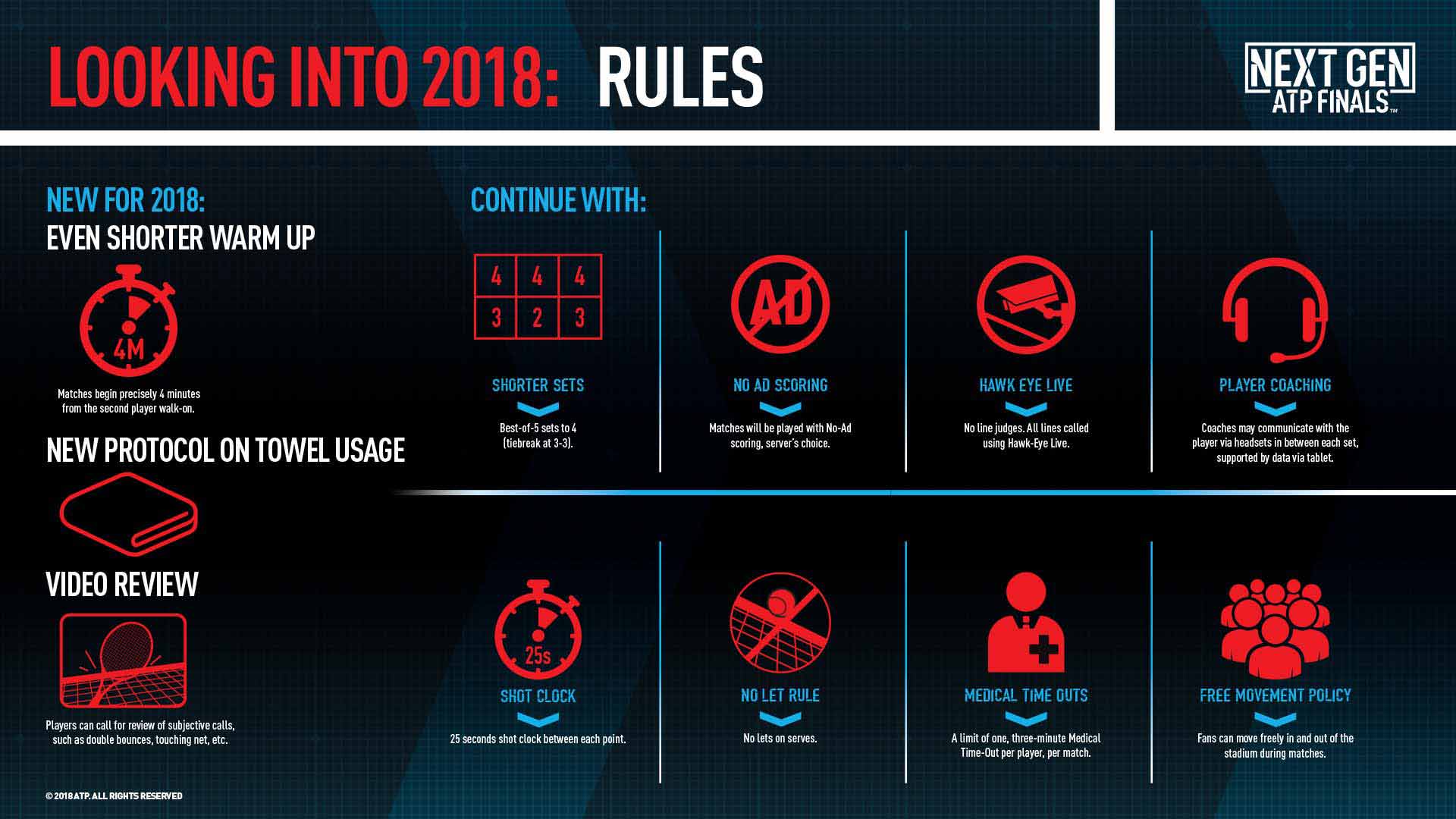 Innovations will again be featured at the 2018 Next Gen ATP Finals. © ATP World Tour

New innovations were as common at last year's inaugural Next Gen ATP Finals as Big Four domination has been during the past decade on the ATP World Tour.

Electronic line calling with Hawk-Eye Live made its world debut; players communicated with coaches in-match via headsets; and the scoring at the 21-and-under event featured more meaningful moments with less down time in matches through shorter sets to four (tie-breaks at three-all) and no-ad scoring.

Read More: Milan Review: A Look Back At The Innovations And Rule Changes

But this year, there will be far fewer new innovations at the Next Gen ATP Finals, to be held 6-10 November in Milan, and it's an intentional status quo. Rather than applying a completely different set of rules during the second edition, officials are largely sticking with what worked in 2017, while also adding a few new innovations, in an attempt to build a more robust set of data to study and inform potential future changes to the ATP World Tour.

“We've always said this event could lead to change on tour and to change in the sport, and I think for us to have legitimate research, analytics, buy-in from tennis stakeholders, and for us at the ATP to understand what feels right, we needed more than one year of continuity of the same new innovation rules,” said Ross Hutchins, Next Gen ATP Finals Tournament Director. “Therefore, we decided to add additional changes after the success of the opening year, with legitimate and innovative new potential rule changes that have exciting possibilities for the sport.”

The inaugural tournament, which was won by South Korea's Hyeon Chung, also featured a shorter player warm-up (five minutes), no lets, a limit of one medical time out per player per match and a 25-second shot clock, which was then used on tour this year during the North American hard-court swing and at the US Open.

Those innovations, along with electronic line calling, in-match coaching, shorter scoring with best-of-five sets and a “free movement” crowd policy (except behind the baselines) will remain during the 2018 edition. But the player warm-up will be reduced by a further minute, from five to four, and players will be instructed to use towel racks, which will be positioned at both back sides of the court, rather than relying on ball kids to retrieve and handle the sweaty towels.

ATP officials and players agreed that one more minute could be trimmed from the warm-up, which starts when the second player walks on. “We felt that it is a good time to push it even more, live content is what we feel the audience wants to see,” Hutchins said.

The towel racks, a point of discussion in tennis of late, will be tried out for a couple reasons, Hutchins said.

Watch Now: Life On Tour With The #NextGenATP

“We came up with this concept earlier in the year as we wanted to experiment with this part of the on-court interaction between player and ball kids. We are taking hygiene of ball kids into consideration and also putting the onus on the player between points,” he said. “We think there could be some clear logic in this, and ultimately let's try and do something creative here and try to put the responsibility on the player.”

The award-winning Next Gen ATP Finals will also feature more history. For the first time in men’s professional tennis, video review will be available to further analyse judgement calls from the chair umpire, including the following incidents: double bounces; foul shots, such as a double hit or a carry; touches – when the ball might skim a racquet or clothing; and invasion – when the player, or anything he's wearing or carrying, makes contact with the opponent's side of the court while the ball is in play. Players will be able to challenge any such calls.

“We've seen it across a lot of sports and we felt this could be an extra layer of officiating and excitement in tennis,” Hutchins said of video reviews. “Whenever a sport can add further accuracy of the officiating, I feel that is a positive.”