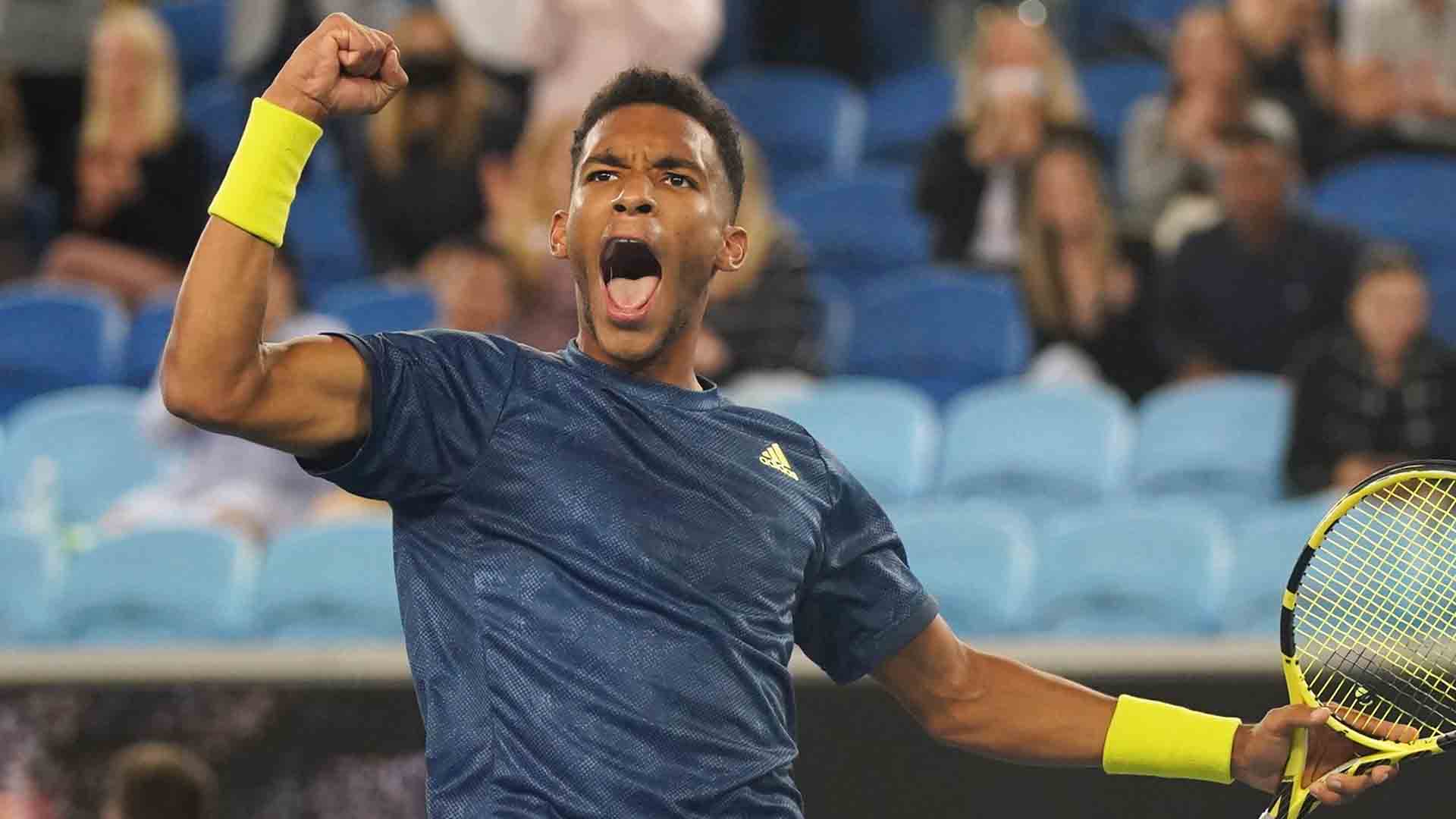 Felix Auger-Aliassime is through to the Australian Open Round of 16 for the first time. © Tennis Australia

Felix Auger-Aliassime claimed a statement 7-5, 7-5, 6-3 victory on Friday against good friend and fellow Canadian Denis Shapovalov at the Australian Open.

The #NextGenATP Canadian hit 31 winners and earned five service breaks to reach the fourth round at Melbourne Park for the first time. Auger-Aliassime’s win takes his match record to 7-1 this year.

“It was a good match on my part. It is never easy to play Denis. We played for the first time when we were nine, so we go back a long time,” said Auger-Aliassime, in an on-court interview. “He has beaten me pretty badly a couple of times and tonight, it went my way. I was flawless and I played an amazing match. It is a shame that we had to play each other… I can just be happy about my performance tonight.”

The Montreal-born star began his Australian Open campaign just 24 hours after contesting his seventh ATP Tour championship match at the Murray River Open (l. to Evans). Auger-Aliassime is yet to drop a set this week. The 6’4” right-hander claimed three-set victories against Cedric-Marcel Stebe and James Duckworth in the opening two rounds.

“It is amazing [to be in the fourth round], especially here. I didn’t have so much luck [in the] past years, but I always loved this place,” said Auger-Aliassime. “Finally, this year I am playing some good tennis… It is a pleasure.”

The 20th seed entered the match seeking his first Grand Slam victory against Shapovalov, who won both of the pair’s first-round matches at the US Open in 2018 and 2019. Auger-Aliassime levelled his ATP Head2Head series against the 21-year-old at 2-2 after two hours and 21 minutes, adding to his win against Shapovalov at the 2019 Mutua Madrid Open.

Following Milos Raonic’s four-set victory against Marton Fucsovics, there will be two Canadian men in the Australian Open Round of 16 for the first time in the Open Era (since 1968). The only previous Grand Slam where two Canadian men reached the fourth round was at last year’s US Open, when Auger-Aliassime, Shapovalov and Vasek Pospisil made it through the opening three rounds.

Shapovalov earned the first break on Margaret Court Arena at 3-3, as he directed his forehand into Auger-Aliassime’s backhand to earn short balls and extract errors. However, it was Auger-Aliassime who claimed the first set. The Murray River Open finalist focused his attack on Shapovalov’s backhand and benefitted from an increased number of unforced errors to claim the set.

Auger-Aliassime committed multiple errors to hand Shapovalov a break advantage in the second set but, with moments of brilliance, he turned the tables on his rival once more to move one set from victory. The #NextGenATP star ripped a huge forehand passing shot up the line to level the set at 4-4 and, on his first set point, he moved up the court behind a powerful backhand return to strike a forehand winner. 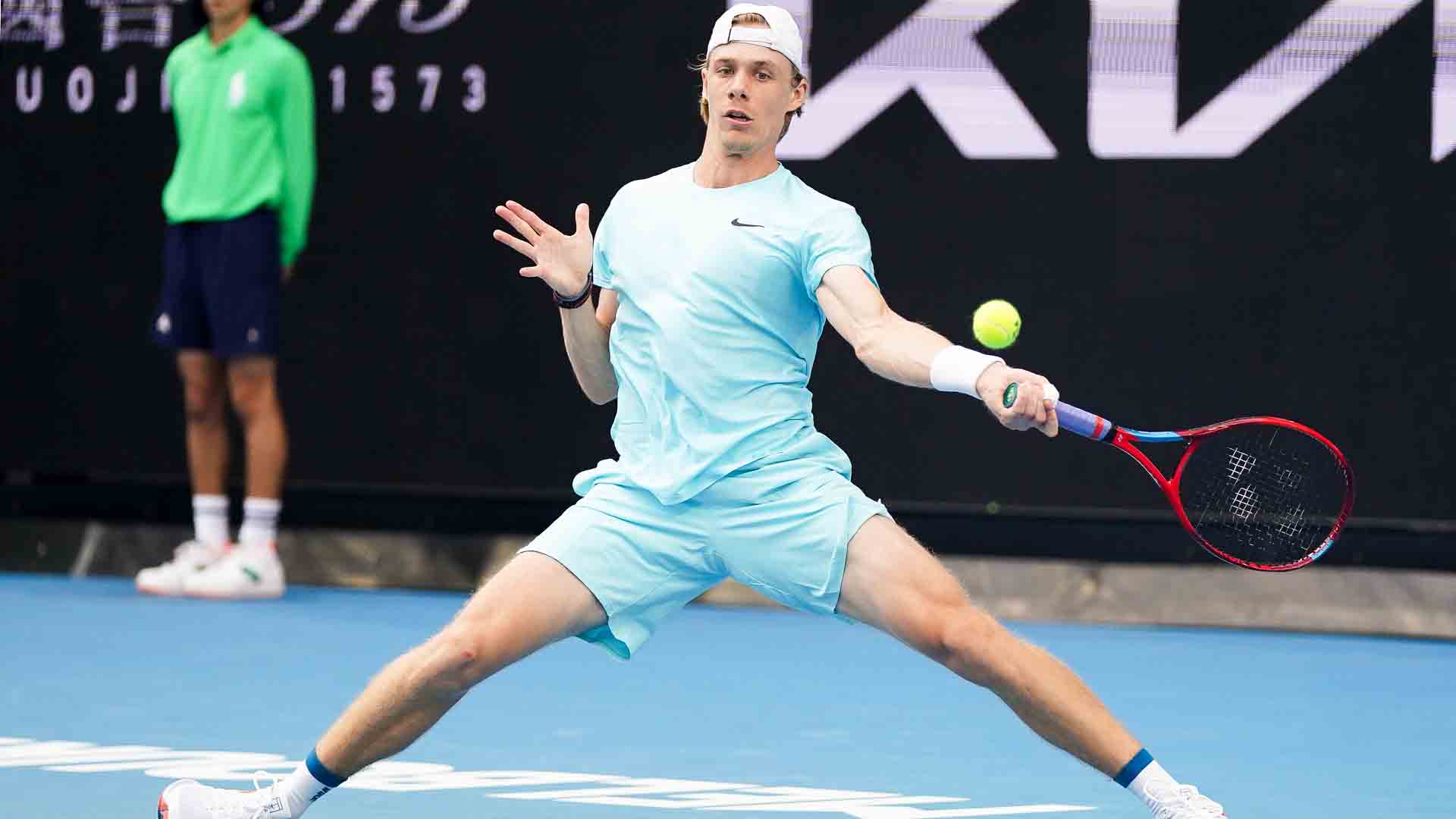 Auger-Aliassime sprinted into a 3-0 lead in the third set and, despite missing a high forehand volley to clinch a 4-0 lead, the seven-time ATP Tour finalist did not panic. Auger-Aliassime stayed calm under pressure to save two break points at 3-1 and came to the net to close the match with a love service hold.

“I started really well,” said Shapovalov. “[I] thought I had all the momentum and then just got tight. [I] just sprayed four points in a row. Nerves got to me a little bit, and after that he got some belief and he started playing really well. It was tough after that. I regrouped in the second set.

“He was putting a lot of returns in the court, so overall he was just playing really solid. It was really impressive to see, but I expected it. He's been in great form, great shape [and] playing great matches.”

Auger-Aliassime will meet Russian qualifier Aslan Karatsev for a place in the quarter-finals. The World No. 114 stunned eighth seed Diego Schwartzman 6-3, 6-3, 6-3 in his first match against a Top 10 player. Auger-Aliassime and Karatsev will meet for the first time at tour-level on Sunday, but the pair has already met twice below tour-level (1-1).

“I know [Karatsev] a little bit. He has come through qualifying and he has beat some good players,” said Auger-Aliassime. “He is a tough opponent, so I am going to try to relax now and get ready to play my best tennis again in two days.”