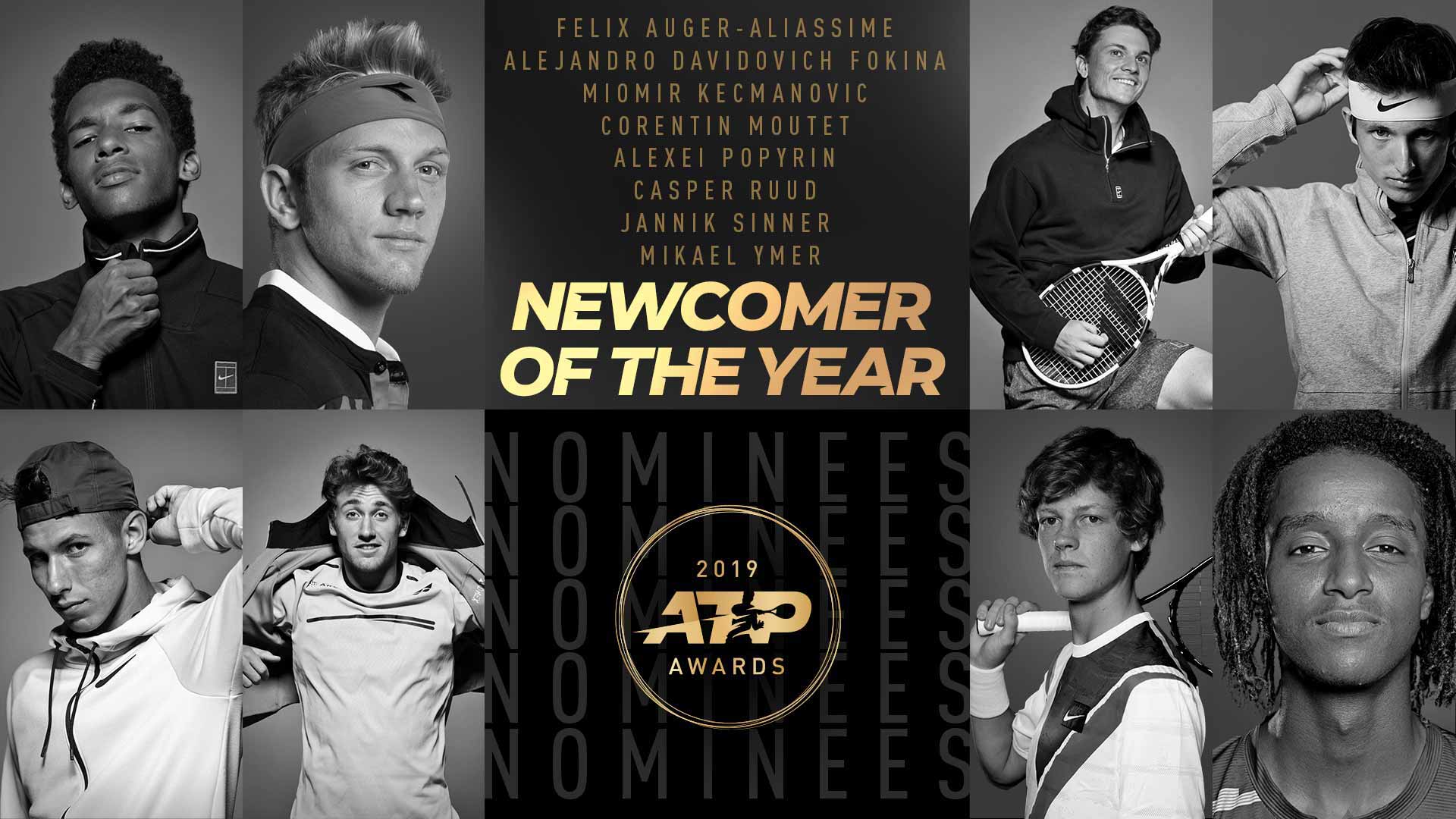 The Newcomer of the Year in the 2019 ATP Awards goes to the #NextGenATP player who entered the Top 100 for the first time in 2019 and made the biggest impact on the ATP Tour this season. There are eight nominees this season: Felix Auger-Aliassime, Alejandro Davidovich Fokina, Miomir Kecmanovic, Corentin Moutet, Alexei Popyrin, Casper Ruud, Jannik Sinner and Mikael Ymer.

ATP Awards winners will be revealed in mid-December.

Take a look through the season highlights of the fast-rising, 21-and-under stars.

> Achieved career-high ranking 13 times in 2019, peaking at No. 17 on 14 October. At age 18 on 27 May 2019, became youngest player in Top 25 since Lleyton Hewitt, 18, on 13 December 1999.
> Advanced to first ATP Tour SF and final at the Rio Open presented by Claro as 104th-ranked wild card, making him the youngest ATP 500 finalist in series history (since 2009). Also reached the finals in Lyon and Stuttgart, becoming the youngest three-time ATP Tour finalist since Rafael Nadal in 2004-05.
> Qualified and won seven matches at the Miami Open presented by Itau to become the youngest semi-finalist in tournament history, and the third-youngest semi-finalist in ATP Masters 1000 history (Denis Shapovalov at 2017 Montreal, Michael Chang at 1990 Toronto).

"It’s been a solid year!" Auger-Aliassime posted on Instagram. "Truly blessed and thankful to be nominated among these other great players of our sport 🙏🏽 Much love to all of you fans for supporting me throughout the past 11 months♥️ #ATPAwards"

> Achieved career-high No. 82 on 28 October after winning the Liuzhou Challenger title. Broke into Top 200 and Top 100 in 2019. At age 20, became the youngest Spaniard in Top 100 since Nadal, 20, was No. 2 in 2006.
> Competed at 2019 Next Gen ATP Finals.
> Defeated Taylor Fritz, Jeremy Chardy and Gael Monfils in second ATP Tour main draw to reach Millennium Estoril Open semi-finals as a qualifier. At age 19, became the youngest Spaniard to reach an ATP Tour SF since a 19-year-old Nadal won the 2006 Barcelona title.
> Went 34-11 on ATP Challenger Tour in 2019, winning titles in Seville and Liuzhou. Also reached two other Challenger finals.

Thank you for the nomination @atptour . Very happy of ending the year like this and quite impatient for what’s coming. 🌊 pic.twitter.com/jiQe3QZJrC

> Achieved new career-high ranking 15 times in 2019, peaking at No. 47 on 9 September. Broke into Top 100 on 18 March 2019 after reaching his first tour-level quarter-final at the BNP Paribas Open, an ATP Masters 1000 tournament, as a lucky loser
> Defeated Ruud and Davidovich Fokina to reach the semi-finals at the Next Gen ATP Finals. Lost to eventual champion Sinner.
> Earned all 24 of his career tour-level wins in 2019, highlighted by his first ATP Tour semi-final and final at the Turkish Airlines Open Antalya. Qualified and defeated No. 6 Alexander Zverev for the biggest win of career at the Western & Southern Open Posted his first tour-level win at the Brisbane International as a qualifier (d. Mayer).

Newcomer of the Year Nominee!

> Achieved career-high No. 80 on 22 July, soon after qualifying at Wimbledon. Broke into Top 100 on 17 June 2019 following Lyon Challenger title.
> Earned biggest win of career over World No. 23 Guido Pella to reach Roland Garros third round as a wild card. Qualified and rallied from two sets down to defeat Grigor Dimitrov and reach the Wimbledon second round.
> Won ATP Challenger Tour titles in Chennai and Lyon.

Who will be the newcomer of the year ? 🤨 pic.twitter.com/guvziPluZu

> Achieved career-high ranking 13 times in 2019, breaking into Top 100 on 24 June and peaking at No. 87 on 29 July.
> Qualified 10 times on ATP Tour in 2019, tying the record set by Mischa Zverev in 2016. Among tournaments where he qualified were the BNP Paribas Open, Rolex Monte-Carlo Masters and Wimbledon.
> Won a main draw match at all four Grand Slams in 2019. As a wild card, upset then-No. 8 Dominic en route to becoming one of three teenagers (Alex de Minaur, Shapovalov) to reach the Australian Open third round. Also reached the third round of the US Open.
> Reached first ATP Tour quarter-final in Atlanta.

Popyrin posted on Instagram: "Good way to finish the year, hard work paying off 💪🏽 honoured to be nominated 🙌🏽 only the beginning #PopOnTop"

> Broke into Top 100 on 4 March and achieved career-high No. 54 on 12 August. Highest-ranked Norwegian since his father, Christian Ruud, was No. 51 on 27 September 1999 (career-high No. 39).
> Competed at 2019 Next Gen ATP Finals.
> Runner-up in Houston, joining his father at 1995 Bastad as only two Norwegians to reach an ATP Tour final. Also advanced to semi-finals in Saol Paulo and Kitzbuhel.
> Reached Grand Slam third for first time at Roland Garros, where he beat No. 31 Matteo Berrettini in the second round for the biggest win of career. Qualified at ATP Masters 1000 events in Miami, Rome, Cincinnati and Paris.

"Honored to be nominated as one of the newcomers of the year😊 thanks @atptour !!🎾" Ruud posted on Instagram.

> Ended 2019 as youngest player in the Top 300 at age 18 and career-high No. 78. Youngest player in year-end Top 80 since 17-year-old Nadal finished 2003 at No. 47. Broke into Top 500, 400, 300, 200 and 100 in 2019.
> Went 4-1 en route to 2019 Next Gen ATP Finals title (d. de Minaur). Earned $372,000 in Milan — more than entire career entering that event.
> Defeated World No. 13 Monfils for biggest win of career en route to 2019 Antwerp semi-finals as a wild card. Became the youngest ATP Tour semi-finalist since Borna Coric, 17, at 2014 Basel.
> Made winning ATP Tour debut in April at the Hungarian Open as a lucky loser (d. Valkusz). Saved one match point against Steve Johnson in his ATP Masters 1000 debut at the Internazionali BNL d’Italia as a wild card. Made Grand Slam debut at the US Open as a qualifier and fell to 2016 champion Stan Wawrinka.
> Captured ATP Challenger Tour titles in Bergamo, Lexington and Ortisei, becoming the second-youngest player to win three Challenger titles in a season behind Richard Gasquet in 2003.

Thank you @ATPTour for your nomination for the newcomer of the year award! I’m absolutely honored!#ATPAwards #ATP #NewcomerOfTheYear #tennis #newcomeroftheyear pic.twitter.com/S2BNGJigai

Mikael Ymer (Sweden)
Began playing tennis at age 3 because of his older brother Elias, who is also an ATP pro.

Ymer posted on Instagram: "Thanks @atptour 🙏🏽 definitely celebrating this on Saturday🥳😉😄🥳"