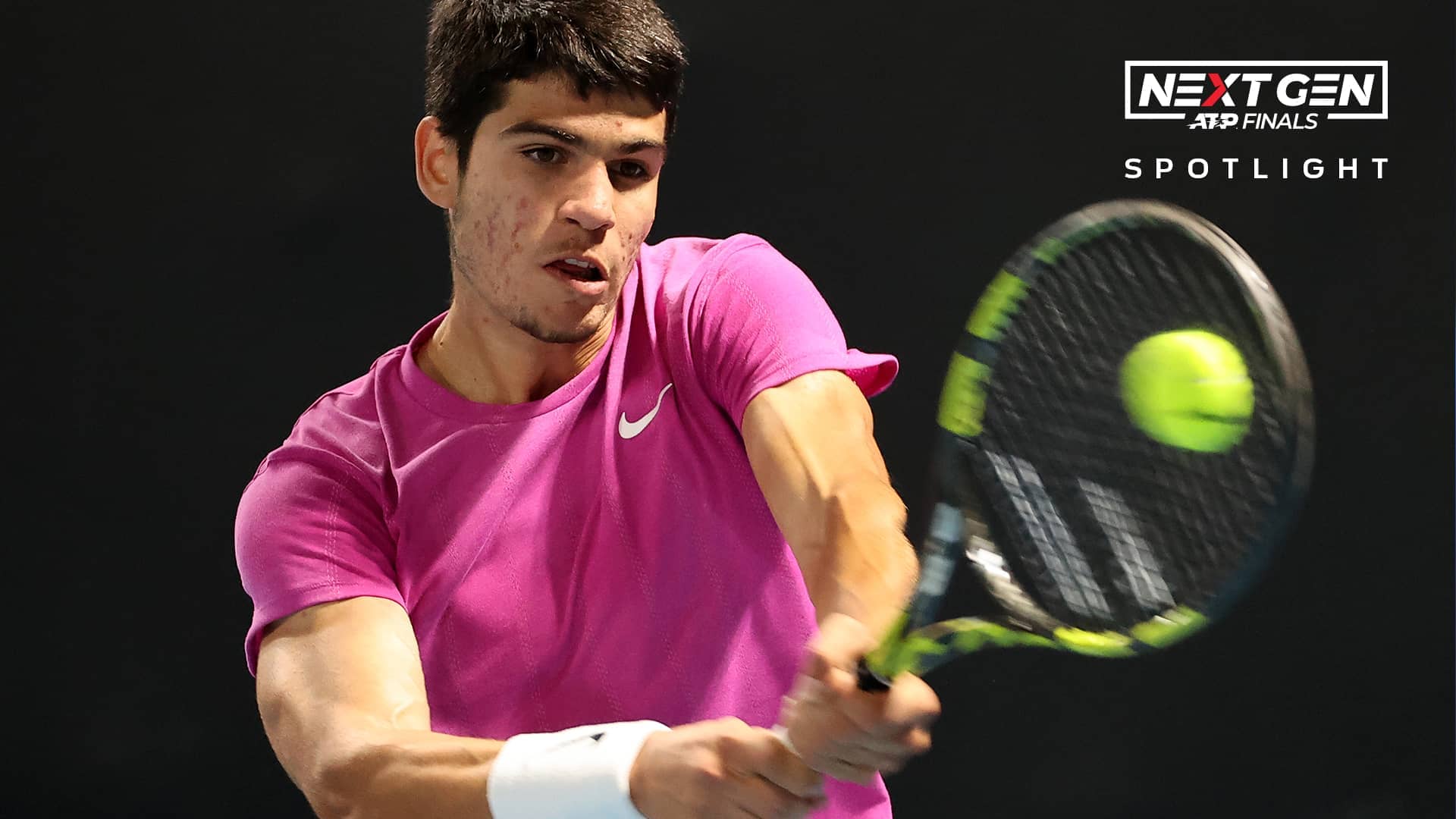 Spain's Carlos Alcaraz hopes to qualify for the Next Gen ATP Finals in Milan in November 2021.

Carlos Alcaraz is getting used to his newfound status. Media requests are increasing as are his career ambitions. The 17-year-old Spaniard is becoming hot property and on Wednesday he makes his ATP Masters 1000 debut at the Miami Open presented by Itau.

“I’m getting used to the interviews and I feel more relaxed,” Alcaraz told ATPTour.com. What he is finding harder to grow accustomed to though is rubbing shoulders with ATP Tour stars, who, until recently, he had been watching lift the biggest trophies on television.

This week, he practised with Marin Cilic in the build-up to Miami and last month he was able to train with Rafael Nadal before the Australian Open. “It was incredible to be able to train with my idol,” said Alcaraz. “To get to prepare for the tournament with him was a unique experience, one that I’ll never forget in my life.”

When he passes members of the sport’s elite in the hallways, locker rooms, restaurants and gyms of tournaments, Alcaraz remains a little starstruck. “I try to treat it as naturally as possible, but whenever I see someone who I watched on television when I was younger, I always tell Juan Carlos [Ferrero] or someone in my team; ‘Look, there’s Rafa!’ Or ‘There’s Cilic!’ I’m still amazed to be in the same place as them.”

Through hard work and dedication, Alcaraz has risen from No. 492 in the FedEx ATP Rankings at the start of 2020 to his current position of No. 132. Last year, he’d been invited to play in Miami, following his first ATP Tour victory over Alberto Ramos-Vinolas at the Rio Open presented by Claro, but the global COVID-19 pandemic struck. Alcaraz won ATP Challenger Tour titles in Trieste, Barcelona and Alicante in the few months he was able to compete last year and so far in 2021, he's beaten a Top 15 player in David Goffin at the Great Ocean Road Open and won a match on his Grand Slam championship debut at the Australian Open.

“Honestly, with the pandemic in the way, I wouldn’t have believed I could be here in Miami to play in the main draw of a Masters 1000,” said Alcaraz. “If it weren’t for the pandemic, in a normal year, then maybe I would have believed it a little more.”

Alcaraz is currently in the Top 10 of the ATP Race To Milan for a spot at the Next Gen ATP Finals and the prospect of competing at the Allianz Cloud with the likes of current leaders Felix Auger-Aliassime (aged 20), Jannik Sinner (19) and Lorenzo Musetti (19) is a real 2021 goal for the Spaniard. “It’s true that last year it wasn’t on because of the pandemic, but I think that [playing in the Next Gen ATP Finals] would be a good goal.

“They all play really well, I wouldn’t say one in particular. Felix is Top 20 [in the FedEx ATP Rankings], Sinner is Top 35, I couldn’t choose one. It’s true that I’ve come up with Musetti, I played with him as a junior, and we’ve come across one another at some ATP Challenger Tour events. He’s the one I have the best relationship with. The one I’ve spent most time with, and the one I speak to most outside of the group of Spanish players.”

“My goal is to end the year among the 50 best players in the world," said Alcaraz. "If I achieve that goal I’ve set myself for this season and reach the Top 50, that would mean I will be playing in Milan in November. It would be a good goal.”

Former World No. 1 Juan Carlos Ferrero and his team are doing a good job of keeping Alcaraz’s feet on the ground. “I try not to pay too much attention to all the expectation being generated of me. I try not to place much importance on things being said about me like ‘the new Rafa’ or ‘the future No. 1’. I’m focused on following my own path, continuing to grow and gain experience.”

What is true though is that nobody can stop him from dreaming. When asked what he sees when he closes his eyes and thinks about his future success, Alcaraz smiles and says, confidently, “Winning a Grand Slam and being the World No. 1.” Then, after a brief pause, he says, “Or both”, before finally settling on “Both!” Only time will tell.