Carlos Alcaraz: A New Member Of The Elite 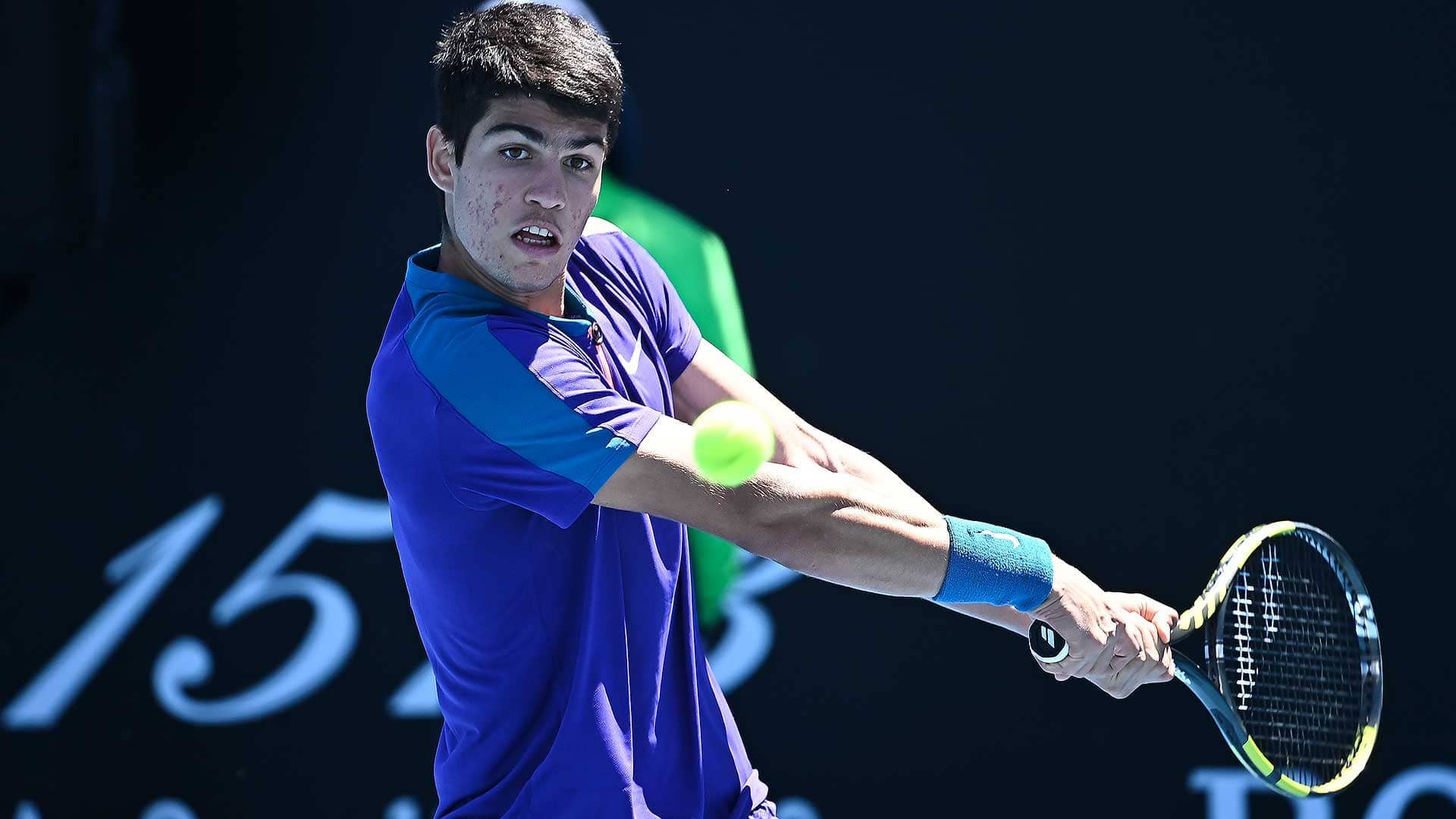 World No. 141 Carlos Alcaraz qualified for the Australian Open and plays Mikael Ymer on Thursday in the second round. © Peter Staples/ATP Tour

They say slow and steady wins the race, but Carlos Alcaraz seems determined to continue making great strides on his road to stardom. Only his teenage features give any indication of his youth. Judging by his game, his attitude and his results, probably nobody would guess he is only 17 years old. On Tuesday, 9 February 2021, the Spaniard broke new ground in his precocious career, by winning his first Grand Slam singles match at the Australian Open.

“I feel surprised and excited at the same time,” he admitted, after beating the Dutch Botic van de Zandschulp 6-1, 6-4, 6-4 on his Grand Slam championship debut. “I handled the situation really well, as it was my first best-of-five match. I was surprised that I handled it so well and so serenely.”

In very little time, Alcaraz has grown accustomed to being just another member of the Tour’s elite. “I’m new here, I still haven’t played many ATP tournaments and this is my first Grand Slam. In the locker room, the gym and the canteen I’m surrounded by all the players I’ve been watching since I was young. I try to treat it as normal, but when I stop to think, I say to myself: ‘I’m surrounded by the best! The players I grew up watching!’”

It is the excitement of a boy mixed with the performances of a man. This is how he sees himself when he shares the hallways of Melbourne Park with the best tennis players on the planet. But, how does his fellow Spaniards see him?

His coach, Juan Carlos Ferrero, answered the question for ATPTour.com. “I thought Carlos was very well prepared,” said Ferrero. “He was very keen to play in a Grand Slam and he was very excited about it. The thing that surprised me the most was the ease with which he was able to play from the start through to the end.”

Ferrero is certainly responsible for a fair share of Alcaraz feeling confident on the court. Ferrero is a former No. 1 in the FedEx ATP Rankings and at the helm of one of the most exciting Spanish tennis stories. “Carlos had never played to five sets, but he knew how to handle the tense moments of the match. He started out with great intensity. At the end of a five-set match it’s very important not to dip at any point and to stay focused from start to finish. It’s a very positive match to continue growing from.”

Someone who knows exactly what it means to break down barriers at a very early age has also noticed his potential. “He's very good,” says 2009 Australian Open champion Rafael Nadal. “He's very young. He has everything to improve in the future with his age. He already is where he is, and he has a lot of great things in his game. I really believe that he will have a great future because he's a good guy, humble [and a] hard worker. He has a lot of positive things.”

The 20-time Grand Slam champion was able to witness Alcaraz at work on court first-hand after a training session at Melbourne Park last week. “He has intensity. He has the passion. He has the shots, and he's always the same in my opinion. He has all the ingredients to become a great champion.”

If there is one player in the ATP Tour locker room that knows him well, then that player is Pablo Carreno Busta. The Asturian is yet to forget the day he first met him. “It was in 2017,” said Carreno Busta. “We met in The O2 at the [Nitto] ATP Finals [in London]. We were knocking up, and he didn’t miss a single ball. He was 14 years old and you could see he was different.”

It would be the first of many hours they have shared on court — normally at the JC Ferrero-Equelite Sport Academy in Villena, Alicante, where they normally train. “Carlos has a very high ball speed. It looks like he’s barely doing anything and the ball flies off his racket. He has very high energy [and] he works very hard. He’s dedicated [and] he learns quickly… He really wants to keep improving. He’s a great kid above all, very humble and hardworking.”

Feliciano Lopez, who is appearing in his 75th consecutive major championship at this year’s Australian Open, smiles when he talks about Alcaraz. “It’s been many years since I’ve seen a Spanish player with that potential. Although I haven’t trained with him, I’ve trained close to him in recent days, so I’ve been able to see him play. Seeing a 17-year-old play like Carlos is something very special [and] unique.”

Pablo Andujar admitted, “I had the chance to train with him one day and he really did seem like an incredible player. He has a tremendous future. I’m really happy for him because he’s a very humble kid, who has a lot of respect for his elders. I’m also happy for Juan Carlos [Ferrero]. He is very involved, and I think it’s a great project. I’m happy for them.”

However, amid all the plaudits, both his team and experienced Spanish voices are calling for calm. Such a promising talent should be given time to mature. “What he wins or doesn’t will depend on many things, but we can be very happy to have someone very special who can do big things for Spanish tennis,” said Lopez. “It’s just a reason to be very happy. Everything takes time, of course, but I think that he’s going to be one of the greats.”

Carreno Busta added, “He’s a player who has a very good future and hopefully he does well, but he’s still 17. Let’s not expect him to win the Australian Open.”

Alcaraz plays Sweden’s Mikael Ymer on Thursday in the Australian Open second round.