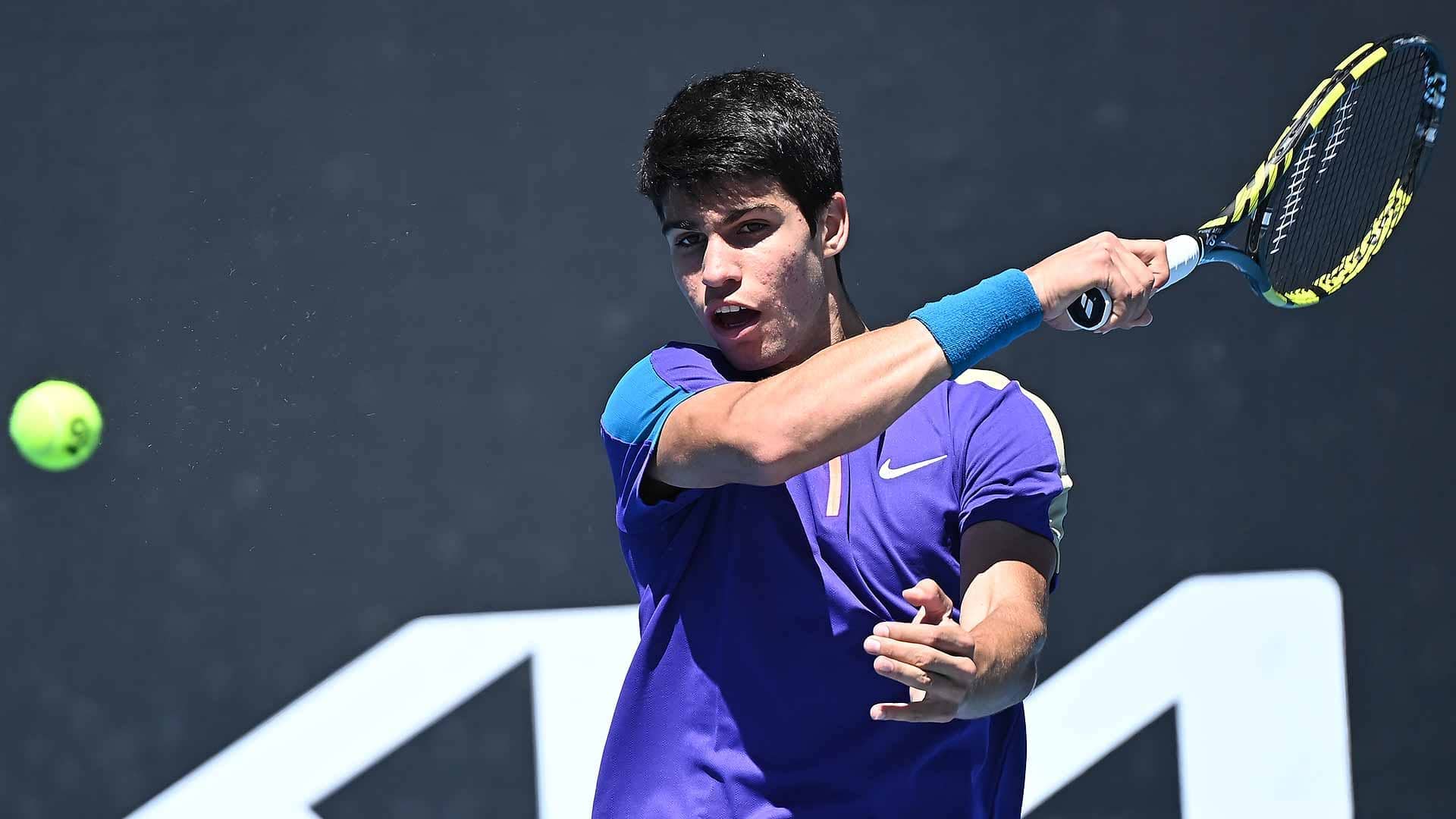 If Carlos Alcaraz was nervous for his Grand Slam main draw debut on Tuesday, he certainly didn’t show it.

The #NextGenATP Spaniard played aggressive, composed tennis to dispatch fellow qualifier Botic Van de Zandschulp 6-1, 6-4, 6-4 in the first round of the Australian Open.

"I'm very happy to win today in my first Grand Slam," Alcaraz said. "I tried to enjoy, to play my game. I think I did it. I enjoyed [the match]. I got the experience. I'm excited to play my second round."

Both players were making their major debuts, so nerves were to be expected. But 17-year-old Alcaraz was unfazed by the moment, losing just nine points in the first set. Juan Carlos Ferrero’s protege weathered every storm he faced on Court 17 en route to a one-hour, 54-minute victory.

After being in hard lockdown for two weeks, it would have been understandable had the teenager got off to a slow start in Australia. But last week Alcaraz upset top seed David Goffin in the Great Ocean Road Open, and now he is through his major debut in straight sets.

Van de Zandschulp was not an easy draw for Alcaraz, either, despite it also being the Dutchman’s Slam debut. Last week, the 25-year-old beat Reilly Opelka and pushed big-hitting Russian Karen Khachanov deep into a third set in a match that lasted two hours and 37 minutes.

But Alcaraz had an answer to every surge his opponent made. In the early going, Van de Zandschulp misfired often and allowed the Spaniard to find a rhythm. But the Dutchman rallied from a break down in the second set and his baseline power began to push the player nearly a decade his junior behind the baseline for the first time in the match.

What stood out about Alcaraz was that he never showed frustration or panic. After losing serve for the first — and only — time in the match at 3-2 in the second set, the three-time ATP Challenger Tour champion broke back in the next game.

The 6’1” righty showed plenty of skill, too. In one point, Van de Zandschulp struck a solid overhead. Alcaraz, who was so close to the back wall that he was off the screen, somehow guessed the right direction and crushed a backhand winner up the line.

The 17-year-old hit two more winners than Van de Zandschulp (26-24) and made 21 fewer unforced errors (23-44). The Dutchman double faulted the deciding break away in the third set and Alcaraz did not flinch when serving out the match, screaming “Vamos!” and smiling at his team after clinching his triumph.

"I played a very good first set. I think he missed a lot of balls. I tried to be focussed all the time," Alcaraz said. "The second set was very, very tough. He played a really good game in the second set. I tried to be relaxed in the tough moments."

Ymer is into the second round of the Australian Open for the second consecutive year. The 22-year-old has not made the third round at a major.

Did You Know?
Alcaraz is the youngest man to win a Grand Slam match since Thanasi Kokkinakis at the 2014 Australian Open.