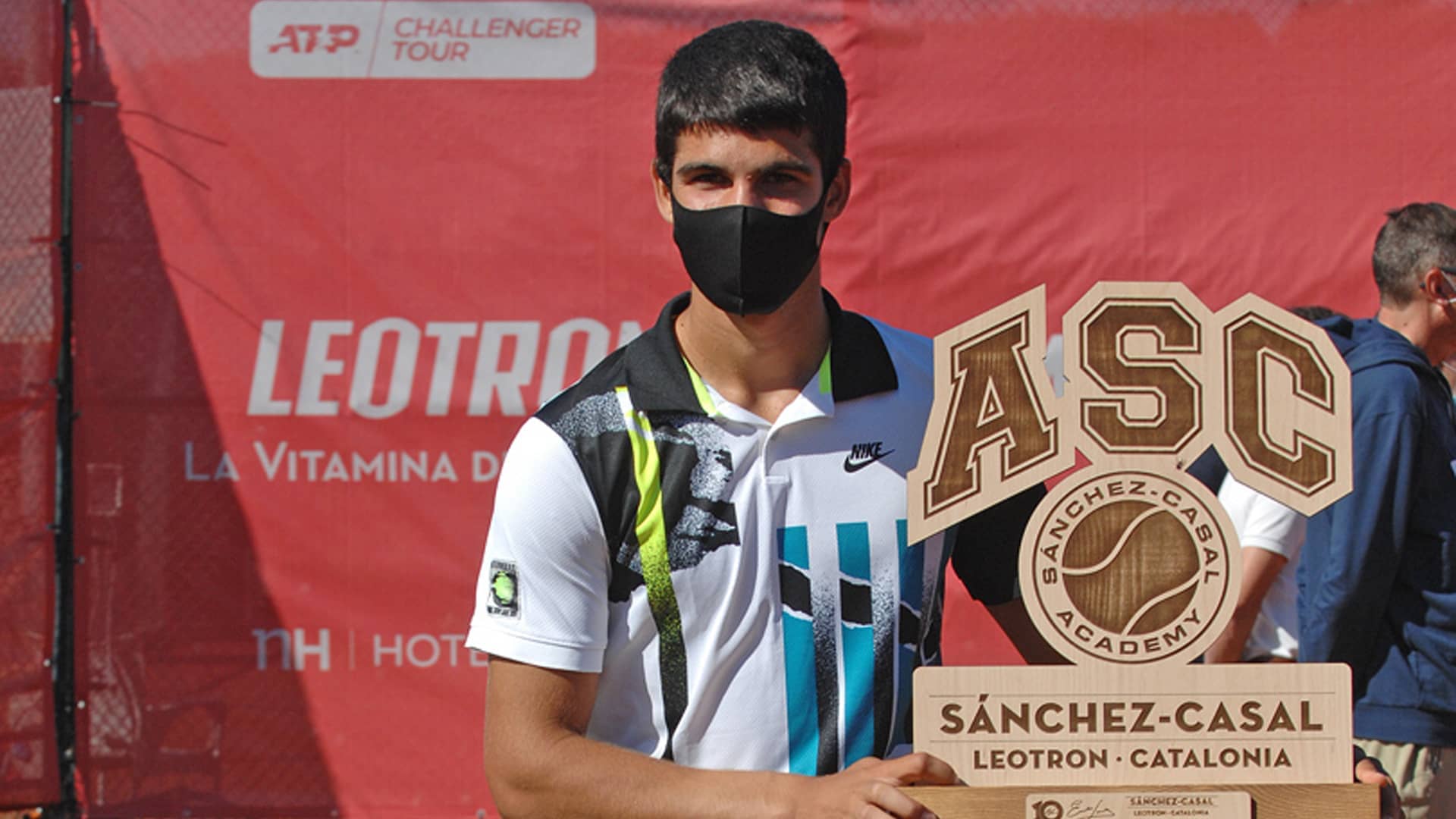 On the day Rafael Nadal secured his 20th Grand Slam title, another Spaniard made history of his own.

Carlos Alcaraz was made to work, but the 17-year-old battled back to defeat Damir Dzumhur for his second ATP Challenger Tour title on Sunday. Alcaraz needed one hour and 48 minutes to prevail 4-6, 6-2, 6-1 under sunny skies in Barcelona.

It was a memorable victory for the Murcia native, who lifted his first Challenger trophy on home soil. With coach and former World No. 1 Juan Carlos Ferrero and close friend and current World No. 18 Pablo Carreno Busta in attendance, Alcaraz triumphed on the clay courts of the prestigious Sanchez-Casal Academy.

The talented teen joins elite company with the victory, becoming just the fifth-youngest player to win multiple titles in the history of the ATP Challenger Tour. At the age of 17 years and five months, only Richard Gasquet, Felix Auger-Aliassime, Rafael Nadal and Bernard Tomic were younger when they won their second title. It was in August that Alcaraz captured his maiden crown in Trieste, Italy, and now the ascent continues in grand fashion.

In fact, only 12 players aged 17-&-under have won multiple titles on the circuit. Alcaraz cemented himself in the history books, joining a legendary list that includes current and former Top 10 stars Nadal, Gasquet, Novak Djokovic, Juan Martin del Potro, and Tomas Berdych, as well as fellow #NextGenATP stars Auger-Aliassime and Jannik Sinner. Most recently, the Canadian joined the club in 2017, while the Italian achieved the feat last year.

"I'm very happy to win in Barcelona," said Alcaraz. "The truth is, I didn't know how it would go, because last week I lost in the second round in Biella. But, little by little I gained confidence and found my form. Many thanks to my team for supporting me and pushing me throughout the week. They helped me find the level that I needed to win."

Alcaraz won the U16 European Championship junior title at the same venue in 2018. This week, he turned in many clutch performances to triumph at Sanchez-Casal. In the first round, the Spaniard defeated Pedro Sousa, who had finished runner-up the week prior in Split, Croatia. That was followed by gritty deciding-set wins over Mario Vilella Martinez and Filip Horansky. And on Sunday, Alcaraz was forced to pull double duty after his semi-final was postponed due to rain. He would finish off qualifier Andrea Collarini in the morning and outlasted Dzumhur hours later.

Alcaraz is projected to rise more than 30 spots to a career-high No. 158 in the FedEx ATP Rankings. His 15 match wins since the COVID-19 restart are tied for the most on the ATP Challenger Tour. He owns a 15-3 record since tennis returned in mid-August, with Russia's Aslan Karatsev the only other player to notch as many victories (15-1 record).

Next week, Alcaraz returns to his home base of Alicante for the Alicante Ferrero Challenger. He opens against India's Ramkumar Ramanathan, with a potential meeting with Daniel Elahi Galan in the second round. Galan reached the third round at Roland Garros last week.