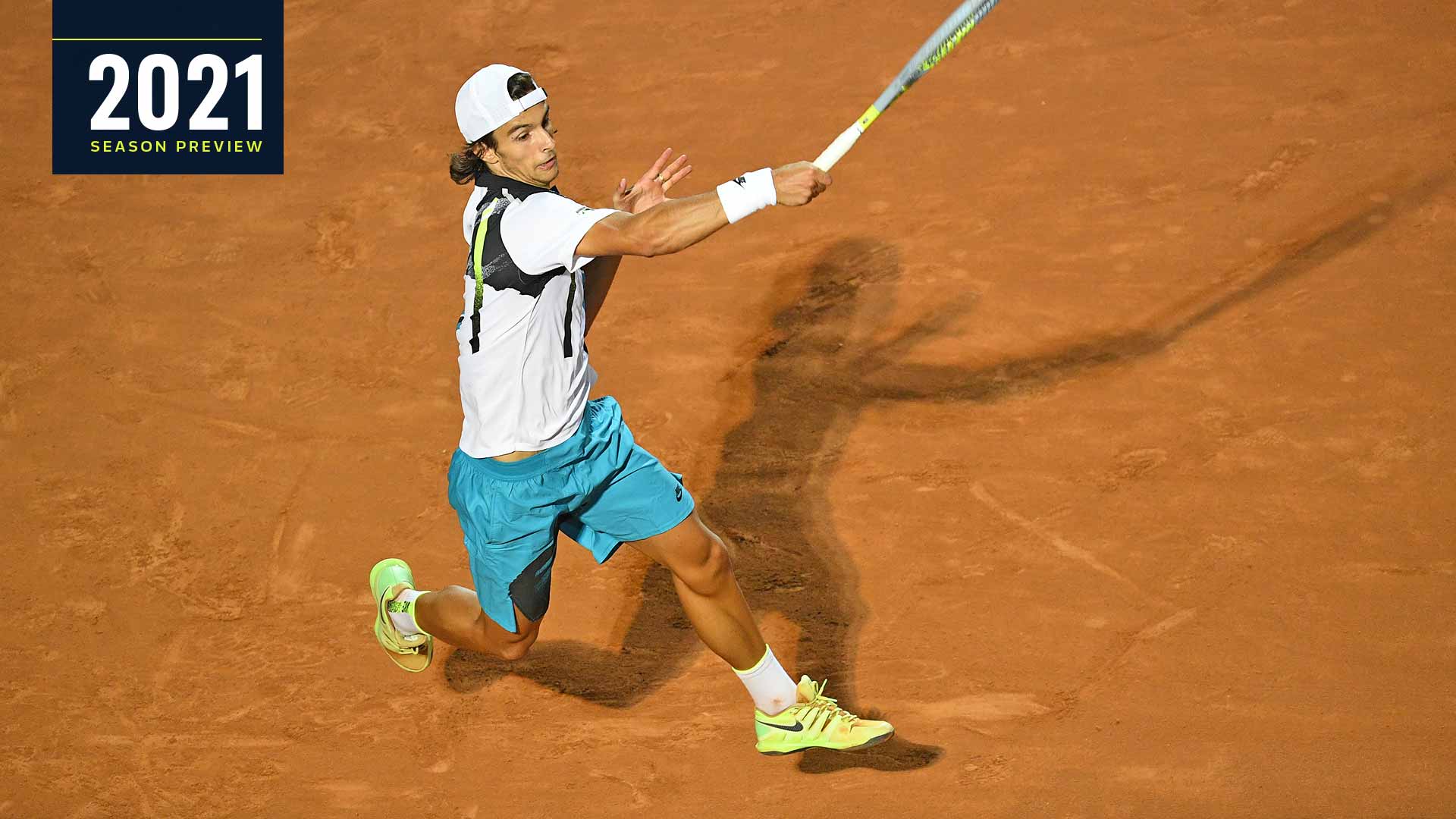 Every year #NextGenATP players deliver surprises, upsets and breakouts. Jannik Sinner had plenty of eyes on him in 2020 after winning the 2019 Next Gen ATP Finals, but he took another step forward last season. The 19-year-old Italian spent much of 2020 notching big 'firsts': he reached his first Grand Slam quarter-final on the red clay of Roland Garros, captured his first ATP Tour title at the Sofia Open, and broke into the Top 50 of the FedEx ATP Rankings for the first time to end the year at a career-high No. 37.

Who will do the honours of breaking through in 2021? Here are six #NextGenATP players to keep an eye on next season.

1. Lorenzo Musetti, World No. 128
Lorenzo Musetti completed one of the biggest upsets of 2020 with his statement first-round win over Stan Wawrinka at the Internazionali BNL d’Italia. But it was the way he went about it that catapulted him into the #NextGenATP spotlight. After fighting past the qualifying rounds, the 18-year-old dropped a love set on the three-time Grand Slam winner 6-0, 7-6(2) to delight his home crowd with his first ATP Tour main draw victory.

The Italian used the win as a springboard and got a taste of victory the very next week as he lifted the ATP Challenger Tour trophy in Forli. Musetti closed out the season with his first ATP Tour semi-final at the Forte Village Sardegna Open. Now, the mission for 2021 will be to keep adding to his trophy cabinet - and keep making his mark on Tour, this time away from the red dirt of Italy.

Alcaraz ended the season with 10 wins from his final 11 matches and claimed back-to-back titles - making him one to watch in the new year. Coached by former World No. 1 Juan Carlos Ferrero, the 17-year-old will look to keep the momentum going as he tries to make his debut as the youngest member of the Top 100 in the FedEx ATP Rankings.

3. Thiago Seyboth Wild, World No. 116
The Brazilian came tantalisingly close to a Top 100 breakthrough in 2020 when his FedEx ATP Ranking peaked at a career-high No. 106. The 20-year-old played like a veteran as he quietly put together a breakthrough start to the season, winning his first ATP Tour title at the Chile Dove Men+Care Open in Santiago. Even more impressive? He only had one ATP Tour main draw victory under his belt going into the event, and he had achieved it the week before at his home tournament at the Rio Open presented by Claro.

Seyboth Wild will be looking to strike the right balance and build up consistency in 2021. Despite winning his first ATP Tour title and reaching a Challenger final at Aix en Provence, the Brazilian finished the season with a 10-13 win-loss record on the season (all levels), including 11 first-round exits.

4. Sebastian Korda, World No.118
While many players say that tennis is in their blood, Sebastian Korda knows a thing or two about family legacy. The son of two tennis players, including former World No. 2 Petr Korda, Sebastian made his breakthrough in 2020 and is knocking on the door of the Top 100.

Korda stunned the field in Paris during his electric Roland Garros debut, which saw him surge from the qualifying event to the fourth round of the main draw, taking down No. 98 Andreas Seppi and No. 23 John Isner along the way. The American closed out the season with a long-awaited first ATP Challenger Tour victory in Eckental, his first professional trophy in nine finals (all levels).

5. Hugo Gaston, World No. 162
The last Frenchman standing at 2020 Roland Garros, Hugo Gaston made sure that the Parisian crowd would remember his name. Ranked outside the Top 200, 20-year-old Gaston didn’t have a tour-level win to his name, but he delighted home fans with the best performance of his career to reach the fourth round.

6. Brandon Nakashima, World No. 166
Nakashima made a splash in his ATP Tour debut at the Delray Beach Open by VITACOST.com. Then 18 years old, the American became the youngest quarter-finalist at the tournament since Kei Nishikori’s 2008 title-winning run and he was the fourth-youngest to make the last eight in event history.

Famously level-headed and with a growing reputation for being a problem-solver on court, Nakashima made it a mission to keep chipping away at his ranking in 2020 after starting the year ranked No. 364. The American saved the best for last as he lifted his first Challenger trophy in Orlando to close out the season at a new career-high FedEx ATP Ranking of No.166.