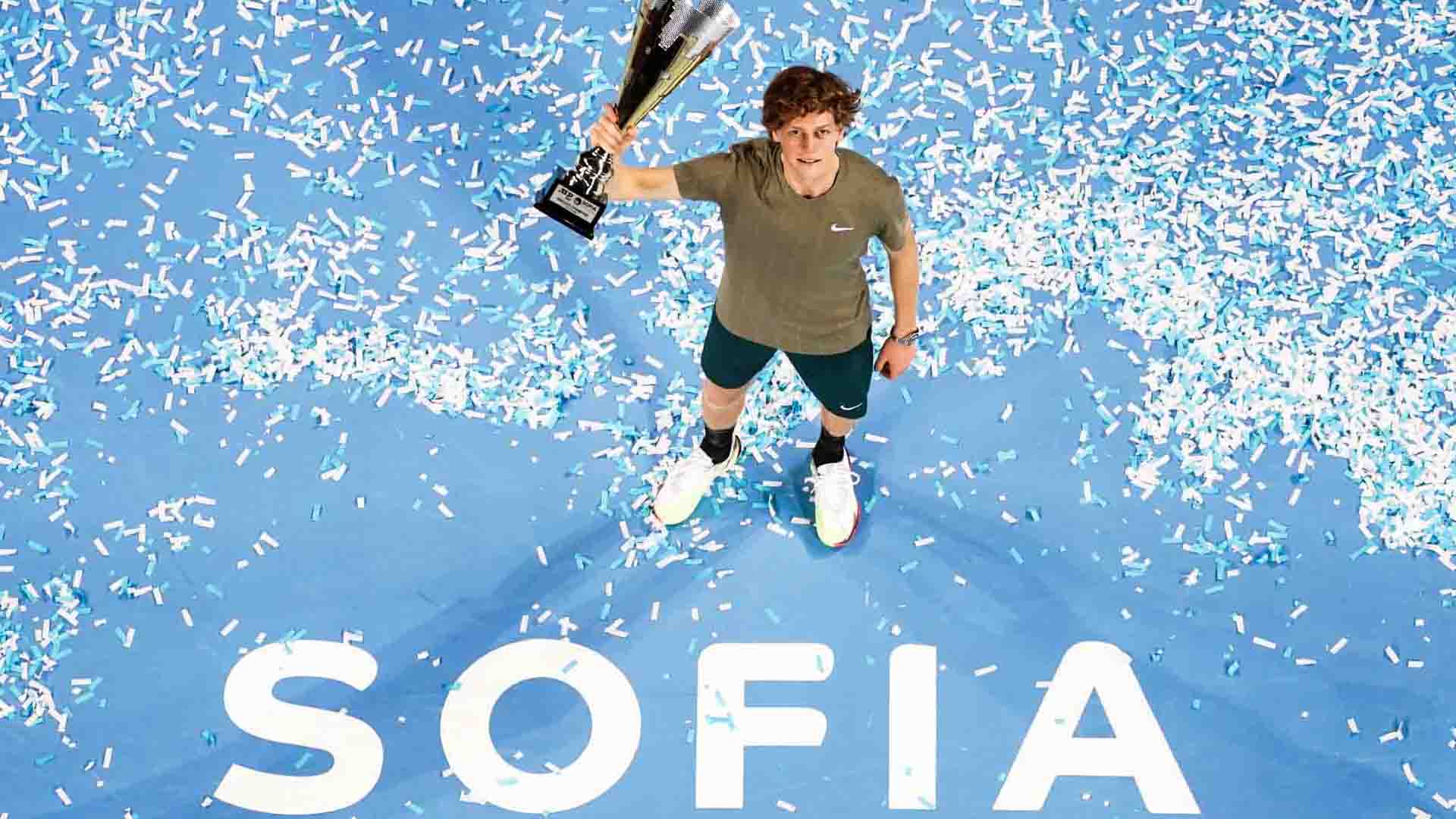 Jannik Sinner is the first Italian to win an ATP Tour singles title in 2020. © Sofia Open/Lap.bg

Jannik Sinner ended his breakthrough 2020 ATP Tour season with a milestone victory on Saturday, as he defeated Vasek Pospisil 6-4, 3-6, 7-6(3) to capture his maiden ATP Tour trophy at the Sofia Open.

Sinner withstood 14 aces and won 75 per cent of his first-serve points (45/60) to become the youngest man to capture an ATP Tour title in more than 12 years. The last player to have lifted a tour-level trophy at a younger age was Kei Nishikori. The Japanese earned his maiden ATP Tour title as an 18-year-old at the 2008 Delray Beach Open by VITACOST.com.

“It is always special when you win tournaments,” said Sinner. “I felt well this week. It is special. Playing finals like this, 7-6 in the third… is always tough. But when you win, it is an even better win than winning 6-1 6-1… I am happy about the match, how I tried to stay there every point and I think it is a very special week for me.”

Just one year ago, then-World No. 95 Sinner stunned the field at the Next Gen ATP Finals in Milan to claim the title. The 19-year-old has used that success as a springboard in 2020 to crack the Top 50 in the FedEx ATP Rankings and strengthen his position as the youngest player in the Top 100.

“It was a very difficult match today… It is a nice feeling to win the first title like last year [at the Next Gen ATP Finals] in the same week. It is good,” said Sinner. “I felt well the whole week here. It is beautiful playing here. The crowd was amazing and it is a nice achievement.”

Sinner’s title run in Sofia completes a memorable 2020 campaign. The 6’2” right-hander claimed three Top 10 wins in 2020 and finished the year with a 19-11 record. As a result of his title run in the Bulgarian capital, Sinner will crack the Top 40 of the FedEx ATP Rankings for the first time on Monday at No. 37.

Pospisil was also attempting to capture his first ATP Tour crown. The 30-year-old, who also finished as a runner-up at the Open Sud de France in February, ends his season with a 16-10 record.

Sinner attacked Pospisil’s backhand with deep returns and dictated rallies with his forehand to earn an early service break. The Italian served well under pressure and claimed the first set with his fourth ace of the match.

The 19-year-old increased his lead with an immediate break in the opening game of the second set, but his advantage did not last long. Sinner committed a series of errors, most notably on his forehand, to drop two of his next three services games and hand Pospisil a 4-2 lead. The Canadian served with confidence and levelled the match with his third love service hold of the set.

In a tight final set, Sinner continued to play with aggression on his return. That tactic paid dividends in the final-set tie-break as he claimed two mini-breaks and the trophy by extracting errors with deep backhand returns.

“It is a great feeling ending the year with a tournament win,” said Sinner. “Now I think the hard work is going to start once more… I hope I am going to start even better next year than I did this year.”