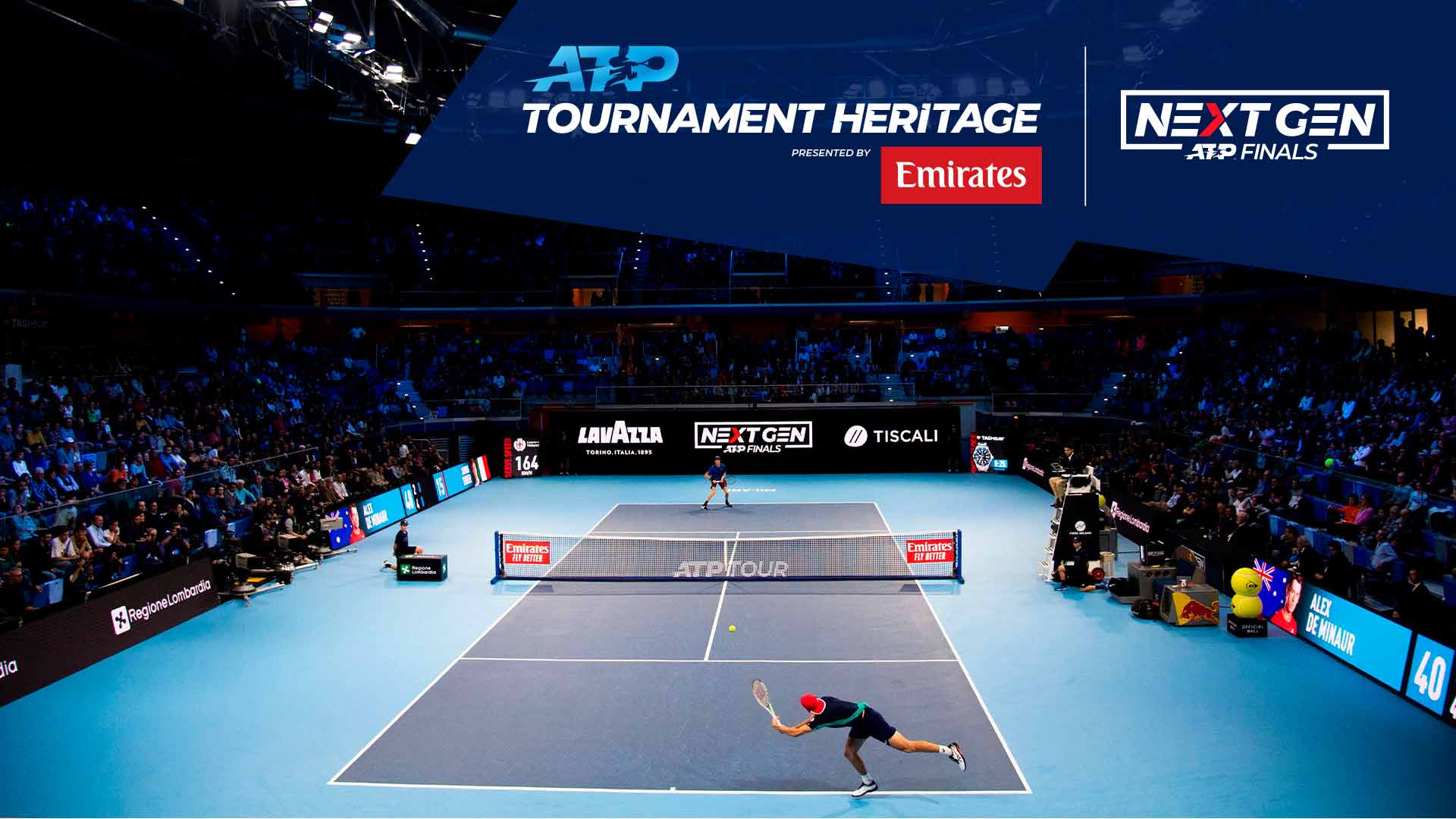 The Next Gen ATP Finals made its ATP Tour debut in Milan in 2017. © AFP/Getty Images

The Next Gen ATP Finals made its debut in 2017, providing a spotlight for the best 21-and-under ATP Tour stars to showcase their skills on a global stage.

The tournament, which has been held in Milan for the past three years, would have been played this week if not for the COVID-19 pandemic.

ATPTour.com looks at five things to know about the innovative event.

Embracing Innovation
One of the defining characteristics of the tournament is its forward-thinking, innovative approach to the sport. The event is unlike any other on the ATP Tour, from its unique scoring system to its use of various technologies.

To heighten the drama for fans, a shorter best-of-five set format was designed for the tournament to increase the number of pivotal moments in a match. Each set is won by the first player to reach four games, with a tie-break at 3-3 and No-Ad scoring.

The 2017 edition of the event also introduced a 25-second shot clock, player headset coaching and a shorter warm-up. Several innovations have since been added to the tournament, including the use of video review and wearable technology.

A Successful Introduction
The 2017 Next Gen ATP Finals in Milan marked a new era in the history of the ATP Tour. For the first time, players aged 21-and-under had a dedicated ATP Tour event where they could test their skills against the best talents in their age group.

After a 10-month battle in the ATP Race To Milan, Andrey Rublev, Karen Khachanov, Denis Shapovalov, Borna Coric, Jared Donaldson and Hyeon Chung and Daniil Medvedev booked their places in the field. They were joined at the Fiera Milano by Italian qualifier Gianluigi Quinzi.

Chung and Coric both made it through the round robin stage with 3-0 unbeaten records, where they were joined by Russian stars Rublev and Medvedev. In the championship match, Group A qualifiers Chung and Rublev met for the second time in the tournament. Chung, known as ‘The Professor’, finished top of the class with his second win against Rublev to end the tournament with a perfect 5-0 record.

“I'm just really, really happy… I really don't know how I won here in Milan,” said Chung. “[It was a] really tough match tonight against Rublev. He was better than the last time [we played]. So I was just trying to play my best.”

Tsitsipas Caps Breakthrough Season With Milan Crown
The second edition of the Next Gen ATP Finals gave fans an opportunity to get to know another group of emerging ATP Tour talents: the Class of 2018. Only one player who had competed in the inaugural edition of the tournament made it back to Italy: Rublev. The 2017 runner-up was joined by Stefanos Tsitsipas, Alex de Minaur, Frances Tiafoe, Taylor Fritz, Jaume Munar, Hubert Hurkacz and Italian qualifier Liam Caruana.

The tournament’s top two seeds, Tsitsipas and De Minaur, showed why they had received top billing at the Fiera Milano. Both men were tested in five-set semi-finals, but advanced to the championship match with perfect 4-0 records.

Tsitsipas, who had captured his first ATP Tour crown just three weeks before the tournament in Stockholm, rallied from a set down to clinch the title in four sets. It capped a memorable season for the Greek star, who started 2018 at No. 91 in the FedEx ATP Rankings and finished the year at No. 15.

"I'm incredibly thankful for the opportunity to play here in Milan and be the second winner of the tournament," Tsitsipas said. "It's a very special moment. I think I can get some confidence out of it and play better in the future."

Entering the third edition of the event, Italian players had lost all six matches they had contested at the tournament. But a new venue — the Allianz Cloud — brought a change in fortunes for the home nation. Ranked No. 95, San Candido native Sinner topped Group B with a 2-1 record and battled past Kecmanovic to reach the championship match.

In the final, he met top seed and 2018 runner-up De Minaur. Backed by a passionate home crowd, the 18-year-old dropped just five games to claim the trophy with a straight-sets victory.

“The week has been unbelievable. The crowd... You can hear them now. I’m very happy... I wouldn't be here without the wild card, so thanks to everyone.”

Milan Is Just The Start
One of the best barometers for the success of the Next Gen ATP Finals has been the results its past participants have gone on to achieve.

Inaugural champion Chung used his Next Gen ATP Finals title run as a springboard to success in his next season. Just two months after his triumph in Milan, the South Korean defeated Novak Djokovic en route to his maiden Grand Slam semi-final at the Australian Open. Chung also reached back-to-back ATP Masters 1000 quarter-finals in Indian Wells and Miami to crack the Top 20 in the FedEx ATP Rankings at No. 19 on 2 April 2018.

Tsitsipas followed in the footsteps of Chung by reaching his first Grand Slam semi-final at the 2019 Australian Open. The Greek advanced to six tour-level championship matches last year (3-3), cracked the Top 5 and finished the season with a milestone victory. Just one year after his title run in Milan, Tsitsipas made a successful return to round robin action by winning the Nitto ATP Finals in London on his tournament debut.

Sinner, who captured an ATP Challenger Tour trophy the week after his Milan victory, also achieved a major Grand Slam milestone in his next ATP Tour season. At Roland Garros this year, the Italian became the first man since Rafael Nadal to reach the quarter-finals on his tournament debut. Sinner has claimed three Top 10 wins in 2020 and risen from No. 78 to a career-high No. 43.

Success has not been restricted to past champions of the event. Four of the eight players who competed at the event in 2017 — Rublev, Khachanov, Shapovalov and Medvedev — have since broken the Top 10 in the FedEx ATP Rankings.

Of the 21 players to have competed at the tournament, 13 have captured ATP Tour singles trophies. Past Next Gen ATP Finals participants own a combined 37 tour-level singles titles. Seven of those men own multiple ATP Tour crowns: Medvedev (8), Rublev (7), Tsitsipas (5), Khachanov (4), De Minaur (3), Coric (2) and Humbert (2).