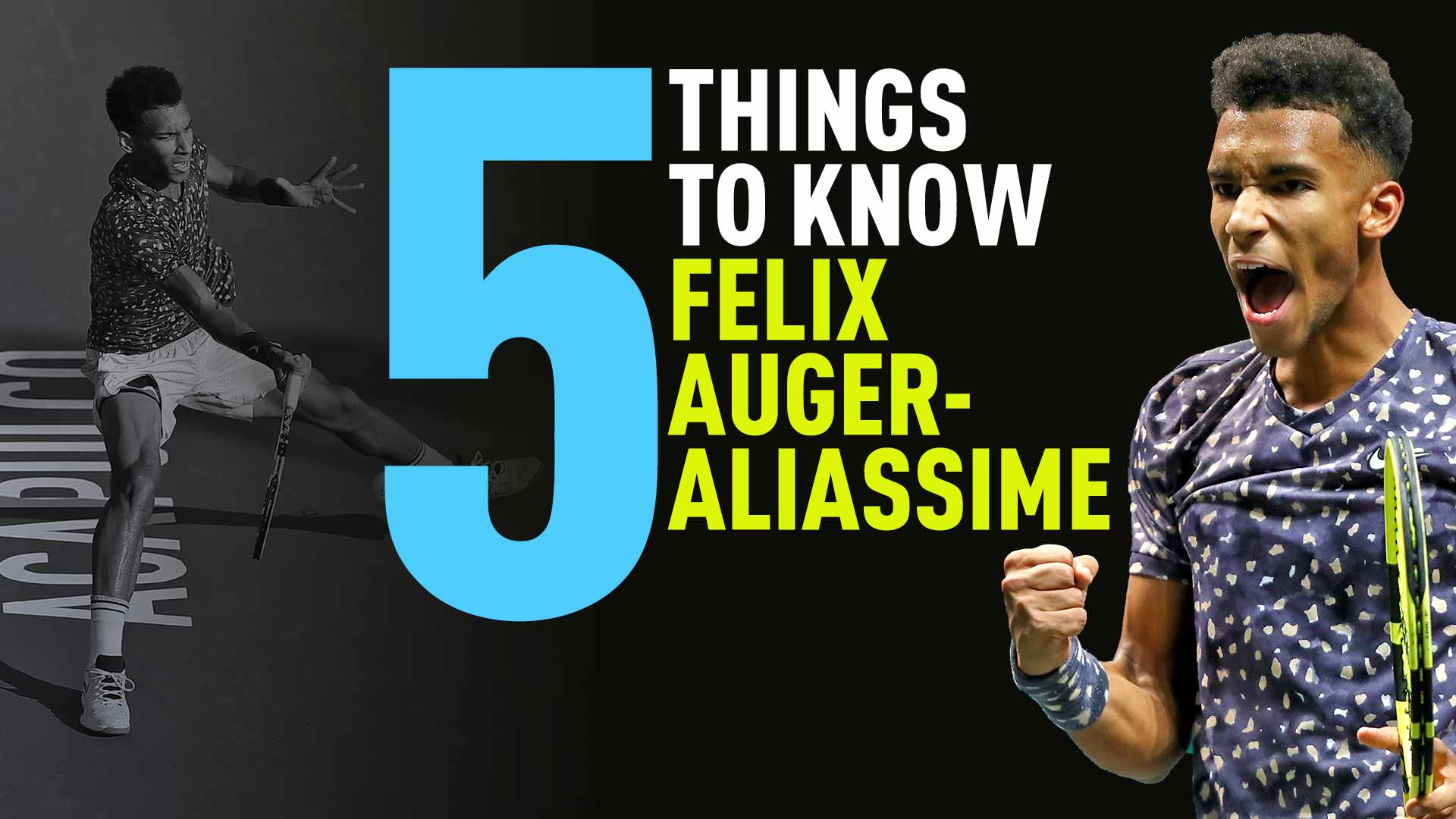 Felix Auger-Aliassime cracked the Top 100 of the FedEx ATP Rankings in 2019, when he was 18. © Getty Images/ATP Tour

Felix Auger-Aliassime began 2019 outside of the world's Top 100, but the Canadian has quickly established himself among the ATP Tour's best, currently sitting at No. 20 in the FedEx ATP Rankings.

Here are five things to know about the #NextGenATP star.

1) He's No Stranger To The Record Books
Auger-Aliassime has put his name in the record books several times since the start of 2019. Entering last year's Rio Open presented by Claro, the Canadian was World No. 104, and he has been on the rise since.

In Rio de Janeiro, Auger-Aliassime advanced to his first tour-level semi-final and final, becoming the youngest player to make an ATP 500 championship match in series history (since 2009).

One of the teen's most memorable runs came at the Miami Open presented by Itau, where he became the youngest semi-finalist in the tournament's history. He also became the third-youngest ATP Masters 1000 sem-finalist, older than only close friend Denis Shapovalov (2017 Montreal) and Michael Chang (1990 Toronto).

Auger-Aliassime, who reached a career-high FedEx ATP Ranking of No. 19 last August, has made five ATP Tour finals (0-5). Last year, he became the youngest three-time ATP Tour finalist since Rafael Nadal accomplished the feat from the ages of 17-18.

2) He Shares A Birthday With Roger Federer
Auger-Aliassime was born on 8 August 2000, exactly 19 years after Roger Federer.

When the Canadian was born, Federer was already rising on the ATP Tour, sitting at No. 39 in the FedEx ATP Rankings. When Felix turned 19 last year, he was World No. 21.

Auger-Aliassime trained with Federer in Dubai during the 2017 off-season, and both men made the Miami semi-finals last year. Although they haven't played one another in an official match yet, Federer had nothing but nice things to say about the teen.

“He was a joy to work with," Federer told ESPN. "He was ranked like 200, and I knew he was on the rise, but maybe not this quickly.

3) Felix Has Picked Up Scrabble During Quarantine
Auger-Aliassime has been with his family in Montreal during the suspension of play due to the COVID-19 pandemic. The Canadian wrote a blog to update his fans and encourage them during these tough times.

Auger-Aliassime revealed that he has taken up Scrabble while staying home with his family.

"My sister beat me by one point the last time we played and that was pretty frustrating! Even though I’m not on court, I need to find a way to be competitive in some part of my life," Auger-Aliassime wrote. "I beat my mom by a few points the other day, so the games have been pretty tight. It’s been a lot of fun."

4) His Rapid Improvement Should Be 'Scary For A Lot Of People'
Former World No. 1 Andy Roddick likes what he sees in Auger-Aliassime's game.

Last year, Roddick told ATPTour.com that Felix looks like, "the next best prospect".

“Something I look for is easy power. I think most guys on Tour, if they set up and want to hit a ball hard, they can. The really, really great ones — you think of Roger, I think of a guy like Tomas Berdych — it doesn’t look like he’s swinging out of his shoes, but the ball kind of launches off of his racquet. And maybe you can’t see the ball on TV, but you can feel it playing against him,” Roddick said. “Felix seems to have that easy power. When he’s going after a ball, it doesn’t look out of sorts. It looks like the technique is pretty much the same.”

More On Felix:
Roddick Explains Why Felix Is 'Next Best Prospect'
Where Were Federer, Nadal, Djokovic & Murray At Nadal's Age?
Felix Taking Flight: The Rapid Ascent Of Auger-Aliassime
Felix On Nadal Compliment: 'It's Just Amazing'

Roddick, a five-time ATP Masters 1000 champion, added that not only has Auger-Aliassime rapidly improved, but he has a similarity with some legends.

“He moves well already. If you look at the guys that win early, you’re looking at a Hewitt or a Roger or a Rafa, all those guys moved well from a young age,” Roddick said. “That’s certainly not a recessing asset. You get to 21, 22, 23 years old [and it only gets better].”

5) Felix Is Quickly Showing An Interest In Charity
In February, Auger-Aliassime announced that he would donate $5 for every point he wins this season to EduChange, partnering with CARE to support the protection and education of children in Togo.

Extremely proud to announce that each point I win during the season will contribute to the education of children in Togo, thanks to the #FAAPointsForChange project with @BNPParibas and @CARE. Details in this video! pic.twitter.com/DJRFggyphZ

“I feel very lucky to have had a hugely satisfying career so far, but I think it’s time to bring more meaning to it beyond tennis,” Auger-Aliassime said. “This year, all my winning points count.”

BNP Paribas will donate $15 for every point Auger-Aliassime wins. It is still unclear when the ATP Tour will resume due to the ongoing pandemic, but Auger-Aliassime will have plenty of motivation when the action begins again, as he tries to raise money for children.